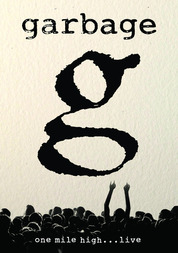 GARBAGE IS 'ONE MILE HIGH…LIVE'

May 28 to see release via DVD, Blu-ray and Digital Video
of Their First World Tour In Seven Years


After a seven year break, 2012 saw Garbage back in the spotlight with a new studio album Not Your Kind Of People followed by their first world tour for seven years. One Mile High…Live was filmed on this tour at the Ogden Theatre in Denver, Colorado on October 6, 2012. Charismatic singer Shirley Manson leads from the front propelled by the twin guitars of Steve Marker and Duke Erikson. The powerhouse drumming of Butch Vig and the basslines of Eric Avery (Janes Addiction, NIN) who provided bass guitar for the live shows, hold down the rhythm section.

The band mix highlights from the new album with classic tracks from across their career to produce, in One Mile High…Live, the ultimate Garbage live experience.

7) Hammering In My Head

17) Only Happy When It Rains

19) The Trick Is To Keep Breathing

21) Time Will Destroy Everything (End Credits)

LOS ANGELES (March 18, 2013) – 2013 Rock & Roll Hall of Fame inductees, HEART, will take their critically acclaimed live show on the road this summer with very special guest JASON BONHAM’S LED ZEPPELIN EXPERIENCE. Ann and Nancy Wilson first met Jason Bonham, son of famed Led Zeppelin drummer, John Bonham, when they performed “Stairway to Heaven” together at the Kennedy Center Honors tribute to Led Zeppelin in December 2012. Over 6 million fans have watched the performance online and purchased the track on iTunes. Now, in addition to a full set of Heart classic hits including “Crazy on You,” “Barracuda,” “Alone,” “These Dreams,” “What About Love” and many more, fans can experience this historical pairing live when Heart and Bonham close each show with a special thirty-minute finale tribute to Led Zeppelin.

Ann Wilson promises fans an incredibly special event. “Nancy and I and the rest of Heart are thrilled to be playing with Jason and his band this summer. Awesome rock ‘n’ roll music every night...miracles apt to happen any old time." Nancy adds, “It's not a tribute as we have the blessings of the gods themselves.”

Jason adds, "What a great night it was for us at the Kennedy Center awards, and now to be able to do it again on the road with Ann and Nancy is such an honor for me. I am really looking forward to taking my Led Zep Experience show out this summer with Heart and to join them in a Zep-a-thon closing the show as well. Just fantastic!”

Tickets for the tour will go on sale beginning on March 23:

A limited number of VIP experience packages with premium seating, exclusive music and merchandise, and a meet and greet with Ann and Nancy will be available for all shows. Heart and Jason Bonham have each teamed up with VIP Nation to offer a variety of VIP Packages. For all of these details visit: www.vipnation.com

Ann Wilson and her younger sister, Nancy Wilson, first showed the world that women can rock when their band Heart stormed the charts in the '70s with hits like "Crazy on You," "Magic Man," "Barracuda," "Straight On," "Even It Up," "Kick It Out" and many more. Not only did the Wilson sisters lead the band, they wrote the songs and played the instruments, making them the first women in rock to do so. Heart continued topping the charts through the '80s and into the '90s with huge hits like "These Dreams," "Alone," "Never" and a string of other hits that showcased the sisters' enormous talents as both musicians and singers. Across four decades and 14 studio albums, Heart has sold more than 35 million records, had 21 top 40 hits, sold out arenas worldwide, and profoundly influenced the sound and direction of American rock music while inspiring women (and guys too!) around the world to rock out in bands of their own.

In 2010, Heart released its first album in a dozen years. “Red Velvet Car” received both critical and commercial acclaim, debuting in the Top 10 in Billboard’s Top 200 Album Chart. In 2012, Ann and Nancy released a memoir, “Kicking & Dreaming: A Story of Heart, Soul and Rock & Roll,” which became an immediate New York Times best seller. They also released a definitive box set, “Strange Euphoria,” a carefully considered anthology of biggest hits and best-loved songs set alongside deep catalog treasures, rarities, demos and live performances, on three compact discs and one DVD in a deluxe box. In addition, they released a new album, “Fanatic,” which features three hit singles: the title track “Fanatic,” “Walking Good” featuring Sarah McLachlan, and “Dear Old America.” The Wilson Sisters were also awarded a star on the Hollywood Walk of Fame.

On December 11, the Rock and Roll Hall of Fame announced the induction of Heart. The induction ceremony will be held in Los Angeles on April 18, 2013 and broadcast on HBO on May 18, 2013. 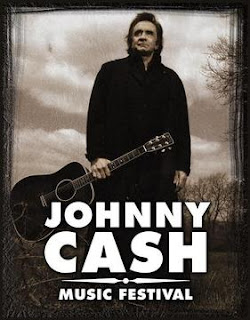 Jonesboro, AR March 18, 2013 -- Vince Gill, Larry Gatlin and the Gatlin Brothers, Jimmy Fortune of the Statler Brothers and Joanne Cash Yates will join show host Tommy Cash for the third annual Johnny Cash Music Festival, according to an announcement made today by concert producer and festival founder Bill Carter. The 2013 event is set for August 17 and will once again take place at Arkansas State University’s Convocation Center in Jonesboro, AR. Showtime is 7 p.m. and tickets will go on sale April 1 (see box office info below).

As in year’s past, proceeds from this year’s event will fund the restoration of the Johnny Cash Boyhood Home in Dyess, Arkansas, as well as support a scholarship fund established in the international superstar’s name. Already, four young people are attending ASU thanks to the money raised at the previous events.

“We have been extremely happy not only with the progress on Johnny’s boyhood home, but also with the funding of this scholarship,” Carter said, “Johnny’s family made it clear from the start that giving children from his hometown area an opportunity to get a college education is something Johnny would have been very proud of. Likewise, the Dyess area will benefit from the economic boost we feel certain this museum will bring to the community. We’re grateful to the artists who are coming in this year to put on a great show for a great cause.”

The restoration of the home is well underway and according to Dr. Ruth Hawkins, director of Arkansas Heritage Sites, the museum is projected to open in the Spring of 2014. The goal is to establish the Johnny Cash Boyhood Home as a museum to honor the legacy of the Man in Black. Keeping the attraction in Cash’s hometown of Dyess will help boost the local economy. It is of interest to note another piece of historical data attached to the house. Cash’s family moved to Dyess and the 40 acres of land as part of President Franklin Delano Roosevelt’s New Deal.

“We have made great progress on the actual restoration of the house and are now working with members of the Cash family on acquiring the appropriate furnishings, which are being carefully researched,” Hawkins said. “Thanks to Joanne’s and Tommy’s great memories, it’s going to seem as if the Cash family has just stepped outside the door to head to church.”