With the holiday weekend approaching, take a moment to watch virtuoso ukulele player Jake Shimabukuro perform "America the Beautiful" at Garden of the Gods Park near Pikes Peak in Colorado Springs. The song was originally written as a poem by Katharine Lee Bates after she visited the landmark in 1893.

Posted by Robert Kinsler at 2:02 PM No comments:

Make sure to check out the new track "Chinatown" (recorded live at Glastonbury) from Liam Gallagher...I love the live version of "Wall Of Glass" that you can see via the link below too.

Tracklisting Revealed For Debut Solo Album As You Were 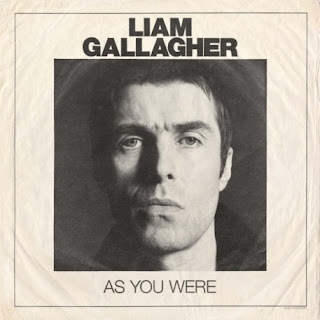 June 30, 2017 (Burbank, CA) - The return of Liam Gallagher gathered pace with a sensational show at Glastonbury last weekend. NME described it as "a swaggering, emotional moment," "worth the hype" and "one of Glastonbury's finest moments," before concluding, "never underestimate the man, he was made for moments like this."Between Glastonbury, his recent sold-out underplay tour of the U.K./Ireland, and an emotional performance at One Love Manchester, Liam Gallagher has demonstrated that he's back to his very best. Click here to view and share Gallagher's performance of "Wall Of Glass" from last weekend's Glastonbury performance. Click here to view and share an interview with Gallagher from Glastonbury.


Now Gallagher continues to build anticipation for the October 6 release of his debut solo album As You Were by sharing the brand new track "Chinatown" and revealing the album's tracklisting. Click here for single and album information.

In contrast to the punchy first single "Wall Of Glass," "Chinatown" is an atmospheric, psychedelic slow burner in which he utilises the more tender side of his inimitable vocal stylings. As a pairing, the two tracks hint at what to expect from As You Were, with Gallagher adding a modern sheen to his passion for a wide range of influences from the 60s and 70s.
After Gallagher ignited the writing process with the heavy duty soul-rock of "Bold," As You Were was recorded in two locations. Greg Kurstin performed all of the instruments on the four songs that he produced in Los Angeles ("Wall Of Glass," "Paper Crown," "Come Back To Me" and the psychedelic whoosh of "It Doesn't Have To Be That Way"), while Dan Grech-Margueratproduced the remainder of the album at Snap! Studios in London.
"I didn't want to be reinventing anything or going off on a space jazz odyssey," says Gallagher. "It's the Lennon 'Cold Turkey' vibe, The Stones, the classics. But done my way, now."
One of the most striking aspects of As You Were is that all the songs have a purpose. There's no flab, nothing to cut. They all feel directed at something or someone, setting the record straight or getting his side of the story over, be that the swinging, Bo Diddley-like "Greedy Soul," which incinerates someone who's the "ungrateful dead" or the mega-ballad "For What It's Worth," which serves up the album's biggest chorus.
The tracklisting for As You Were:
Bonus tracks on deluxe album editions:
The As You Were cover features an iconic new portrait of Liam, which was taken by the influential photographer, fashion designer and creative director Hedi Slimane.
As You Were is now available to pre-order from https://l-gx.com/lg_asyouwere with "Wall Of Glass" and "Chinatown" provided as an instant download. It will be released on digital (standard and deluxe), CD (standard and deluxe) and vinyl (standard 12" and limited edition color 12" formats).
A special boxset is also available from https://wbr.ec/lg-store-dlxboxset. It compiles a color 12" vinyl of the album, an exclusive 7" format of "For What It's Worth," a print designed by Klaus Voorman (the artist behind The Beatles' Revolver album cover) and additional collectors' items.
As previously announced, Liam Gallagher and band will tour North America this fall:
Nov 13             San Francisco, CA        Warfield
Nov 18             Denver, CO                  Gothic
Nov 20             Minneapolis, MN           First Avenue
Nov 21             Chicago, IL                   The Riviera
Nov 23             Toronto, ON                 Rebel
Nov 25             Boston, MA                   House of Blues
Nov 27             New York, NY               Terminal 5
Nov 29             Washington, DC           Lincoln Theatre
Nov 30             Philadelphia, PA            Union Transfer
Joining Liam Gallagher on the road will be Jay Mehler on guitars, Mike Moore on guitars, Christian Madden on keyboards, Drew McConnell on bass, and Dan McDougall on drums.
Posted by Robert Kinsler at 1:10 PM No comments:

Neil Young + Promise of the Real have just issued a media release of interest to fans of the troupe... 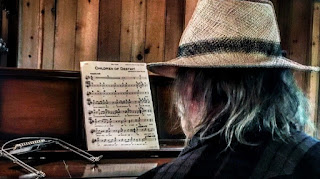 NEIL YOUNG + PROMISE OF THE REAL RELEASE NEW SONG AND MUSIC VIDEO "CHILDREN OF DESTINY" TODAY
NEIL YOUNG AND MICAH NELSON WILL BE ON FACEBOOK LIVE TODAY
AT 11:00 A.M. PT

June 30, 2017 (Burbank, CA) - Neil Young + Promise Of The Real have recorded a brand new Young composition titled "Children of Destiny," which is available beginning today via all digital music retailers. Click here to order. The video, a Shakey Pictures / DHNY production, will accompany the song and also launches today at 11:00 a.m. PT. Click here to view and share the video.
Today, Neil Young and Micah Nelson will premiere the song and video on Facebook Live at 11:00 a.m. PT.
"Children of Destiny" was recorded and mixed at Capitol Studios, Hollywood, CA, and produced by The Volume Dealers: Neil Young and Niko Bolas. Young, along with Promise Of The Real, and a 56 piece orchestra - 62 musicians in all - played together on the final piece. Al Schmitt recorded and mixed, while strings were arranged, orchestrated, conducted and co-produced by Chris Walden.
# # #

The xx release "I Dare You" video

I've really been enjoying the latest The xx album "I See You," and now there is a great new video for one of the many great songs on the album, "I Dare You." The xx turned in one of the outstanding sets I caught at Coachella back in April. You can watch the new video for "I Dare You" below...