A timely announcement for those craving live music here in Orange County, CA! 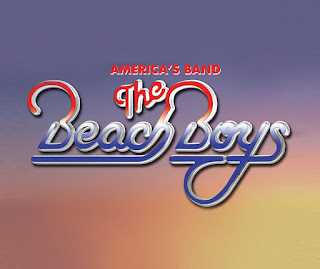 The drive-in show will feature a mix of Beach Boys’ classics as well as new material, including Love’s latest single, “This Too Shall Pass,” which he released at the start of the pandemic via BMG to encourage positivity during this unprecedented time. Produced by Scott Totten and featuring special guest John Stamos on drums, the song is available for streaming and download HERE. To watch the music video, produced by John Stamos, click HERE.  All artists and label royalties from "This Too Shall Pass" go to Feeding America's COVID-19 Response Fund to help food banks across the country as they support communities impacted by the pandemic.

As the show is taking place in Anaheim, CA, The Beach Boys are encouraging concert-goers to support the Second Harvest Food Bank of Orange County, which is a member of the Feeding America food bank network. In Orange County, an average of 506,000 people look to Second Harvest for food assistance each month.  To learn more about the organization and how you can help, please visit: https://www.feedoc.org/.

“We feel so blessed to be able to play live music again," said Mike Love. "And for all of our friends, fans and those in attendance, we encourage you to donate to Feeding America and your local food bank to help the countless people around the country in need right now. We appreciate your love and support."

“People need something to look forward to, and if we can do it safely, then I am grateful we get a chance to bring this much-needed music to people at a live drive-in event like this one,” said John Stamos.

The Beach Boys will also perform material off Love’s holiday album Reason For The Season, which features an array of new holiday songs and Christmas classics ranging from bright guitar and horn-filled pop and rock and track to softer traditional carols and ballads. Sam Hollander (One Direction, Panic! at the Disco, Train) and Steve Greenberg (Hanson, AJR) produced five tracks on the album, including the jubilant title track and the buoyant anthems "It Must Be Christmas" and "Finally it's Christmas" featuring Hanson. Additionally, Love’s children Ambha, Brian, Christian, and Hayleigh Love (All Love) are featured on the album.

The Beach Boys have sold over 100 million records worldwide and have received more than 33 RIAA Platinum and Gold record awards.  The Rock And Roll Hall of Famers were also honored at the 2001 Grammy Awards with the Lifetime Achievement Award.  With more than five decades of touring under their belts, The Beach Boys have performed more concerts than any major rock band in history.

Sounds Of Summer: The Very Best Of The Beach Boys, Capitol/EMI's 30-track collection of the band's biggest hits, has achieved triple-platinum success with sales of more than three million copies in the U.S. since its release. Rolling Stone ranked the album Pet Sounds, as number 2 on its list of the “500 Greatest Albums of All Time,” and The Beach Boys number 12 on its list of the "100 Greatest Artists of All Time.”  Additionally, in a recent poll of Sirius listeners, The Beach Boys were voted the Number One American Group of the 60s.

Drive-In OC at City National Grove of Anaheim has been engineered with safety and wellness top of mind.  For more details about social-distancing guidelines and event details, visit DriveInOC.com.

Posted by Robert Kinsler at 12:17 PM No comments:

New Order has just released their new track "Be a Rebel," along with the cool video. A great song. Also, the band has confirmed upcoming tour dates in North America as well, including two dates at the Hollywood Bowl. Here is the full media release from the band's record label...

Posted by Robert Kinsler at 7:31 AM No comments:

Posted by Robert Kinsler at 9:36 AM No comments:

Posted by Robert Kinsler at 9:11 AM No comments:

Here is a crop of terrific releases including spectacular classic rock returns, an essential autobiography from a rock and roll great, as well as several fantastic new holiday music titles in tune with the season. 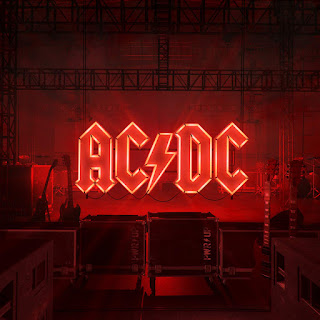 Artist: AC/DC
Title: Power Up (Columbia Records Group)
You might like if you enjoy: AC/DC, Deep Purple's 2020 "Whoosh!"
Tell me more: Few bands have faced their demons and battled back with the kind of aplomb displayed by AC/DC. This is band that was seemingly doomed from the time founding lead singer Bon Scott died in February 1980. Major hearing issues for long-time vocalist Brian Johnson that led him to being temporarily replaced by Axl Rose in 2016, the death of founding rhythm guitarist Malcolm Young in 2017 and legal issues aplenty for drummer Phil Rudd were somehow overcome as evidenced on the hard rockers' brilliant return Power Up. Those worrying the Australia-spawned Rock and Roll Hall of Famers have lost a step fear not; this album rocks as hard as anything in their storied discography. My favorite tracks are the head-banging "Shot In The Dark" and "Systems Down," catchy instant-classic "Witch's Spell," bluesy "Kick You When You're Down" and "No Man's Land," and probing "Through The Mists Of Time." Truth be told, every cut on the album rocks. No wonder within a week of its official release, Power Up had reached the #1 spot on charts across the globe. 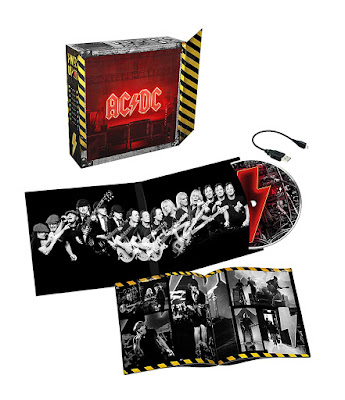 Power Up is available in multiple configurations that will excite collectors and die-hard fans alike, including digital, CD, and deluxe versions. The limited edition, one-of-a-kind deluxe Power Up box is the ultimate fan package. Hit the button on the side of the box and watch the flashing neon AC/DC logo light up while the opening bars of “Shot In The Dark” blast out of the built-in speaker. Inside the box is the full CD package in a soft-pack with a 20-page booklet that features exclusive photos and USB charging cable allowing the box to remain powered up and on display. The vinyl LP is pressed on 180 gram vinyl and housed in a gatefold jacket.  Information: acdc.com. 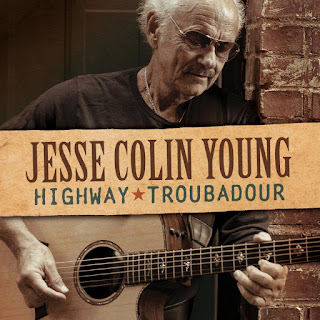 Artist: Jesse Colin Young
Title: Highway Troubadour (BMG)
You might like if you enjoy: The Youngbloods, Jesse Colin Young, Bruce Cockburn
Tell me more: Singer-songwriter/guitarist Jesse Colin Young has just returned with Highway Troubadour, his 22nd solo album (but first truly solo acoustic record since his 1964 debut The Soul of a City Boy). Beloved for his work as lead singer for The Youngbloods in the late 1960s and early '70s, Young went on to establish an equally successful career thanks to strong albums such as Song for Juli (1972), Songbird (1975) and On the Road (1976). Now 79, Young's signature vocals and virtuoso finger style guitar work shine across Highway Troubadour. A true survivor, Young put his recording career on hiatus in 2012 when he was diagnosed with Lyme disease. He returned to the ring with his highly-acclaimed February 2019 release Dreamers and is now back with a disc full of compositions pulled from across his catalog; the sessions were recorded with two two AEA A440 ribbon microphones — one for his voice and one for his Taylor 910 CE guitar. Highlights abound; an intoxicating "Cast a Stone" from last year's Dreamers, intimate "Song for Juli" and potent "Darkness, Darkness." He also revisits several Youngbloods classics, including offering up a reworked bluesy take on the Americana rocker "Sugar Babe" and George Remaily's "Euphoria." Information: JesseColinYoung.com. 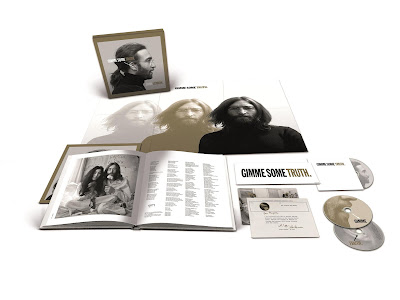 Artist: John Lennon
Title: Gimme Some Truth (Capitol Records)
You might like if you enjoy: John Lennon, The Beatles
Tell me more: In celebration of what would have been John Lennon's 80th birthday, Capitol/UMe released Gimme Some Truth on Oct. 9, 2020. Released via several configurations (including a Deluxe 2CD/Blu-ray edition that includes a 124-page book and much more), the 2CD version I have revisits three dozen of the artist's most beloved solo songs, all upgraded via the work of engineer Paul Hicks, engineer Sam Gannon and mastering pro Alex Wharton at Abbey Road Studios. Listening to these glorious new mixes is to be swept up again by Lennon's monumental talent as a singer-songwriter able to address love, loss, social justice, marriage, world peace, racism, feminism and a myriad of other topics with a brutal honesty that rings true long after his tragic death in December 1980. The range of songs astound even today; the timeless rocker "Instant Karma!," sparse "Working Class Hero," intimate "Love," adored "Imagine," stirring "Oh My Love" and timely "Happy Xmas (War is Over)" are among this writer's favorites. Gimme Some Truth is available as a 19-track CD or 2LP, a 36-track 2CD, or 4 LP, the aforementioned Deluxe edition, and several digital versions for download and streaming including in 24 bit/96 KHz audio and hi-res Dolby Atmos. Information: JohnLennon.com.
CHRISTMAS COLLECTIONS 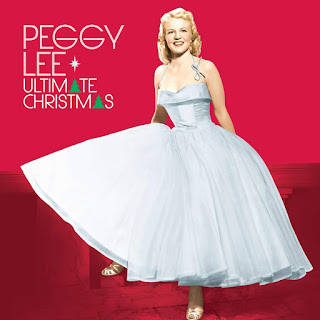 Artist: Peggy Lee
Title: Ultimate Christmas (Capitol Records)
You might like if you enjoy: Peggy Lee, traditional holiday music
Tell me more: With 2020 marking the 100th birthday of the late jazz and popular music singer Peggy Lee, the yuletide set Ultimate Christmas features 22 holiday favorites including "Winter Wonderland," "The Christmas Song," "Happy Holiday," "The Christmas Waltz," Winter Wonderland" and the rare "Peace on Earth." Several of the selections were written by Lee, including the cheerful "Christmas Carousel" (the title track from her 1960 holiday album), sparkling "Don't Forget to Feed the Reindeer," radiant "The Tree" and poignant "My Dear Acquaintance (A Happy New Year)." Lee's signature top-tier vocals and the wonderful orchestral arrangements captured between 1949 and 1968 on audio CD are bolstered by a colorful booklet filled with historical Christmastime photos of Lee and detailed liner notes and information on each of the memorable tracks. Information: umgcatalog.com. 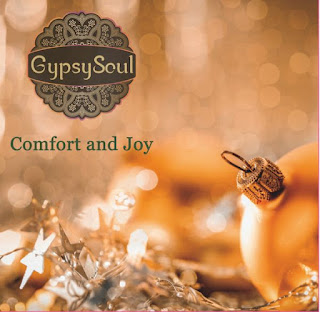 Artist: Gypsy Soul
Title: Comfort and Joy (Off The Beaten Track Recordings)
You might like if you enjoy: Gypsy Soul, Clannad
Tell me more: Talented Oregon-based duo Gypsy Soul is back with a new holiday-minded album, Comfort and Joy. Released Nov. 27, the album features six new recordings; all other tracks on the 14-track disc have been remastered. Cilette Swann's expressive vocals (which spans four octaves) and Roman Morykit's skills on a multiple of instruments are able to musically deliver the warmth and jubilation of the season to be sure, including their jazz-meets-world music versions of "God Rest Ye Merry Gentlemen," "We Three Kings of Orient Are," "The First Noel" and other traditional favorites. Other standouts include "Little Drummer Boy" and "Away In A Manger." Their own "The Snow, The Sea" is a welcome addition on the set. Many modern-day Christmas music collections are stuffed with an excess of bombast and artificial sweetening; Gypsy Soul's Comfort and Joy is a genuinely beautiful and touching tribute to the holiday season. Information: GypsySoul.com.
ROCK 'N' ROLL READ 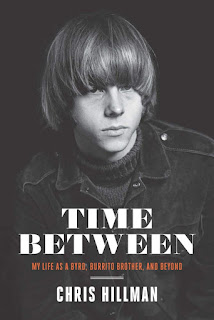 Title: Time Between: My Life as a Byrd, Burrito Brother and Beyond
Author: Chris Hillman
Publisher: BMG Books
Hardcover: 315 pages
Tell me more: In his moving "Time Between: My Life as a Byrd, Burrito Brother and Beyond," Rock and Roll Hall of Famer Chris Hillman provides a compelling and fascinating look at his life and singular career. A founding member of the Byrds, the Flying Burrito Brothers, the Souther-Hillman-Furay Band and the Desert Rose Band, Hillman reflects on the ups and downs of a life spent in the music world but mines equal depth with his reflections on love, family, faith and the loss of so many of his musical mates. He writes in a straightforward way, completely immersing the reader in a wide-ranging life spanning legendary gigs, recording sessions, band breakups, overcoming seemingly-fatal health scares and — his biggest joys — his wife Connie and their children. His relationships with greats ranging from Gram Parsons and David Crosby to Roger McGuinn, Richie Furay and Tom Petty come alive in the wonderful autobiography. Country great Dwight Yoakam pens the foreword. Information: bmg.com.
Robert Kinsler
Posted by Robert Kinsler at 6:45 AM No comments:

Has it really been 50 years since George Harrison's 'All Things Must Pass' was released? Wow, it has. Check out the official media release below...Robert Kinsler

Posted by Robert Kinsler at 9:29 AM No comments: