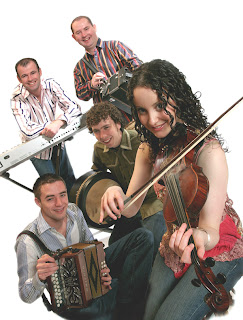 Beoga features Niamh Dunne, Damian McKee, Seán Óg Graham, Eamon Murray and Liam Bradley.
With St. Patrick’s Day less than a month away, there are a number of Irish music concerts coming to Orange County.
One of the most anticipated Celtic concerts is coming courtesy of Beoga, a five-member traditional group based in County Antrim, Ireland.
Beoga (an Irish word meaning “lively”) will perform two shows in San Juan Capistrano as part of the Music at the Library concert series on Saturday evening, March 1.
The group traces its inception to a music jam session in August 2002, which brought together button accordion players Seán Óg Graham and Damian McKee with bodhrán master Eamon Murray and pianist Liam Bradley.
That foursome released the wonderful “A Lovely Madness” CD in 2004, which was greeted with critical acclaim throughout Ireland, as well as Europe and America.
With the later addition of Irish singer Niamh Dunne, the group continued its artistic climb with the recording of 2007’s “Mischief.”
Beoga’s sophomore CD features thrilling jigs (“Kick’n the Box,” “Ryan’s Air”), instrumental reels (“Cu Chullain’s Despair”), traditional folk songs (“Factory Girl,” “A Delicate Thing”) and even a reworked cover of the Steely Dan classic “Dirty Work” and the 1920s swing-styled standard “Please Don’t Talk About Me When I’m Gone.”
It’s no wonder that “Mischief” was praised by Irish Music Magazine and the U.S. publication the Celtic Connection as one of the best albums of 2007.
Beoga is truly able to blend a wealth of traditional folk styles together whether performing original material or revised classics.
Beoga will perform at San Juan Capistrano Regional Library, 31495 El Camino Real, San Juan Capistrano, playing at 6:30 and 8:30 p.m. on March 1.
Tickets are $10 for adults and $5 for children under age 12.
Information: 949-493-1752.

Posted by Robert Kinsler at 7:43 AM No comments:

Outside it was cold and raining, but inside the House of Blues Anaheim on Thursday night, Feb. 21, 2008, a capacity-crowd was warmed by a strong set from headliner Third Day and a groundbreaking appearance from relative newcomer the Myriad.

One of Christian music's most successful rock outfits, Third Day came to Anaheim as part of a short six-date club tour to gear up for a full-fledged spring tour. So while the band only played 75 minutes, fans were treated to the band's best-known hits, as well as some particularly promising songs set for release on the band's next studio release.

Third Day has honed a Southern rock sound that is rooted in the territory of Lynyrd Skynyrd but also boasts a heavy guitar crunch associated with neo-grunge bands such as Three Doors Down and Creed. That doesn't tell the full story, since Third Day's material is always melodic and features uplifting choruses that draw comparisons to U2's approach.
The band explored the full range of its sonic territory, playing the scorching "Rockstar," midtempo material such as "Who I Am" and praise songs ("King of Glory," "God of Wonders") that had many in the audience lifting their arms into the air.

Singer Mac Powell sang with power and conviction throughout the night, his baritone showcased on the soaring "Tunnel" and "My Hope Is You."
The group also played several new songs, with "Call My Name" especially effective with its undeniable chorus.

The Myriad is a young, up-and-coming band out of Seattle whose sound draws comparisons with the Cure, Radiohead and Snow Patrol, but is unique enough to warrant the band's growing buzz.
"A Clean Shot," one of the six songs performed by the band, was a highlight of the 30-minute set. But the lush and artful sound made by the quintet is as much a part of the Myriad as the songs themselves. Following the lead of Sigur Ros, the band even used a violin bow on the electric guitar at times to dramatic effect.
The Myriad is set to release "With Arrows, With Poise" on Koch Records in April and based on the group's wonderful set in Anaheim, it should rank on one of the most anticipated rock albums of 2008.

The night's opening group Revive performed a short set of four songs. The Australian group is one of the Christian rock's emerging voices and has a strong card in lead singer Dave Hanbury, whose impressive voice was especially forceful on the riff rock-styled "Can't Change Yesterday."
Posted by Robert Kinsler at 7:40 AM No comments: 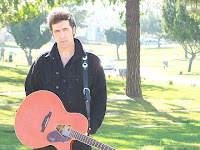 Since its opening in 1980, acclaimed modern rock artists such as the Call and Brother have recorded concerts for commercial release at the Coach House in San Juan Capistrano.

Now one of Orange County's best-known artists is going to chronicle a special full-length concert for release as a combo DVD-CD collection. Fountain Valley-based Michael Ubaldini will headline at the San Juan Capistrano venue on Thursday night, Feb. 21, performing Americana-styled material from across his acclaimed discography.

"We're going to do stuff off every record," explained Ubaldini in a recent interview. "Some songs I'll just play acoustically with guitar and harmonica. Then the band will play with me on the other songs."

The cast of sonic players slated to join Ubaldini on stage includes Gavin Jones (bass), Larry Green (guitar), Mitch Ross (drums), Jimmy Zeiger (saxophone), Chris Lawrence (pedal steel guitar), TJR (keyboards), and Tricia Freeman and Deanie Wood on backing vocals.
"All are great musicians in their own right and it's a pleasure to be back together for this special event," Ubaldini said.

And while Ubaldini and his talented band have been rehearsing in anticipation of the upcoming show at the Coach House, he has also been going into the studio to record new material. Many of the songs are destined to appear on an upcoming acoustic collection, while more up-tempo material will be included on a forthcoming rock album.
"It has been a good year for songs," Ubaldini said.

Ubaldini, the Fallen Stars and Niki Smart will perform at 8 p.m. Thursday, Feb. 21 at the Coach House, 33157 Camino Capistrano, San Juan Capistrano. Admission to this special concert recording event is $10.