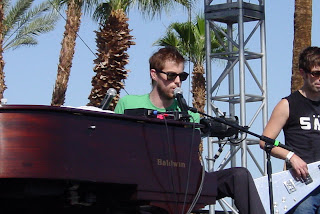 Andrew McMahon (pictured at his piano) led his band Jack's Mannequin through a blistering set of original rock at the Coachella Valley Music and Arts Festival last weekend.


When concertgoers talk about how "cool" it is in Coachella, they are seldom talking about the weather.

Indeed, the 2007 arrival of the Coachella Valley Music and Arts Festival (held April 27-29, 2007) came in customarily summer-too-soon fashion, with temperatures reaching particulary suffocating heights of 103 degrees in Indio on Saturday. However, on this - the first-ever three-day staging of America's most celebrated modern music festival - the music itself was generally strong enough to assist 60,000 or so daily attendees endure Mother Nature's fiery fury.

Friday saw several memorable artists, notably a welcome reunion by the Jesus and Mary Chain, with the band playing their heavy, layered 80s' alt rock in hypnotic fasion. The group played their best-loved songs, including "Happy When it Rains" and "Just Like Honey," the latter featuring actress Scarlett Johansson on backup vocals.

There has been a good deal of hype surrounding England's Arctic Monkeys since last year, so it was great to be able to see the band. While the group's songs didn't necessarily blow me away at first listen, there was no denying the power of the outfit as they charged through blistering tracks such as "I Bet You Look Good on the Dance Floor" and "Fake Tales of San Francisco," as well as the emotive "When the Sun Goes Down."

Despite some technical problems that led to a late start, ex-Pulp frontman Jarvis Cocker delivered a wonderful set on Friday night. Opening with the articulate gems "Fat Children" and "Don't Let Him Waste Your Time," other highlights included "Heavy Weather" and "I Will Kill Again."

The night ended (for me, anyway) with a dazzling performance by Icelandic singer Bjork. A mix of theater and music, and backed by a small female orchestra, she played songs from her forthcoming "Volta" CD, as well as older material.

That brings me to Saturday, the second day of the fest. Like my first trip to Coachella (April 2005), I just about loved everything I took in on Saturday, April 28. With the possible exception of Pop Levi (the day's opening act, who I caught around 12:30 p.m.) and the Red Hot Chili Peppers (who I caught much later that day after the sun set), I saw one great performance after another.
The highlights were clearly blazing sets from Fountains of Wayne, Jack's Mannequin, Travis and Arcade Fire.

Fountains of Wayne took the stage at 2:40 p.m. and it was hot hot hot. Performing on the main stage, the band performed 13 power-pop rockers that helped beat the heat. Favorites? "Strapped for Cash" and the Beatles-flavored "Yolanda Hayes" (both off the band's new CD "Traffic and Weather").

It was seemingly still well over 100 degrees when I left the Coachella stage around 3:30 p.m. to go check out Jack's Mannequin on the Outdoor Theatre. When singer-songwriter-keyboardist Andrew McMahon took the stage, it was clear the one-time Dana Point resident/Something Corporate frontman knew he was in sonic heaven. As animated and on-fire as I've ever seen, McMahon led the band through a set heavy on all the best songs from 2005's "Everything in Transit," including "The Mixed Tape," "Kill the Messenger," "Dark Blue" and "La la Lie." The band also offered up a powerful cover of Tom Petty's "An American Girl."

Listening to Travis perform is an experience best heard. There is something about the group's Brit pop style that is warm, inviting and oh so melodic. On Saturday, lead singer-guitarist Fran Healy led the band through an essential list of winning old and new material. From new tracks such as "Selfish Jean" and the great single "Closer" to old faves like "Writing to Reach You," "Side" and set-ending "Why Does It Always Rain on Me," the dozen songs raced by like the screening of a classic movie. I wish I could play it again.

The Arcade Fire lived up to the continuing hype throughout an hour-long set later that night. Despite the fact that the sun had sunk below the mountains by the time the Montreal outfit took the stage, things would not cool down yet. From the performance of "Keep the Car Running" to the finale (an epic performance of "No Cars Go"), there is something arresting and intoxicating about the band that lives up to the acclaim that leads to a sort of love em/hate em mentality. After seeing the band for myself (despite soaring heat and crowds that slammed around me during the set), I couldn't have been more thrilled with the set.

I wasn't particularly impressed by headliners, the Red Hot Chili Peppers. Was it a case of burn out? I think it was simply the fact that the band seemed to be going through the motions, delivering endless unfocused jams and occasionally offering up a hit or two. No magic there.

Day Three came. Thankfully, the weather cooled a few degrees and my feet somehow agreed to make it through one more marathon-length day in Indio.

First came Mika, a Euro-dance styled singer-keyboardist who delivered a fun set of strong and sunny pop. The highlight wasn't the well-known single "Grace Kelly," but rather the more upbeat "Relax (Take It Easy)" and R&B-styled "Love Today."

Plenty of music was ahead. Highlight for me came in performances from the ELO meets Raspberries recalling the Feeling ("Sewn" was heavenly), post-punk garage rock playing Kaiser Chiefs, country legend Willie Nelson and New Zealand's masterful Crowded House. Mando Daio was an interesting rock quartet that I would see again, while a set from the hyped Kooks didn't impress me on this day.

Much has been written about the headlining set from Rage Against the Machine. There is no doubt the quartet played with a power, fury and anger that shook the Empire Polo Field to its knees on Sunday night at this much-anticipated reunion. But I was so angry at the way the band's large fanbase seemingly could care less about the cool spirit that is truly so much a part of past Coachella shows, especially when a Rage fan threw something at the face of Crowded House frontman Neil Finn, it's best not to get me started. Fans of Rage loved the show; the rest of us discerning listeners likely could understand the band's powerful approach, even while wishing their fans could appreciate the vast reaches of the Coachella universe.

See you next year!
Posted by Robert Kinsler at 10:02 AM No comments: