The Decemberists set to release new EP on December 14

Although 2018 is almost in the history books, holiday albums are not the only new releases being issued this month. Today comes news that The Decemberists will release a new EP on Friday, Dec. 14, 2018...


THE DECEMBERISTS SET FOR DECEMBER 14th RELEASE OF NEW EP TRAVELING ON;
HEAR THE SONG “TRAVELING ON” NOW 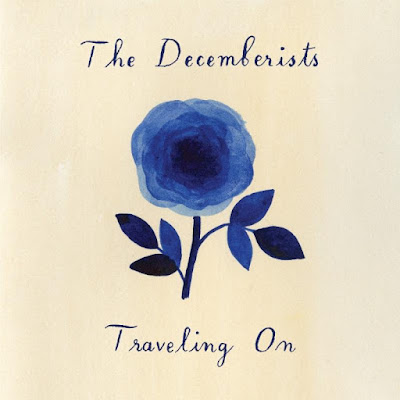 The Decemberists will release a new EP, Traveling On, on December 14. The five-song EP—which will be available on 10” vinyl, CD, and as a digital album—is a collection of b-sides from the sessions that produced their inspired eighth studio albumI’ll Be Your Girl, which came out in March. Listen to the title track “Traveling On,” which is available to stream or download today.

The track listing for the Traveling On EP is as follows:

1. Down On The Knuckle
2. I Will Not Say Your Name
3. Tripping Along (Full Band Version)
4. Midlist Author
5. Traveling On

See what the critics said about I’ll Be Your Girl:

“Every band needs to refresh and reconsider its sound sooner or later, no matter how sharp it's gotten over the course of a long career — even The Decemberists, a band whose records have always come bursting with verve... ‘I'll Be Your Girl’ captures a collaborative spirit that keeps the band sounding vibrant and alive... As a lyricist, Meloy seems emboldened”—NPR Music

“The Decemberists threw a lot of us for a curveball when they announced that their new album would feature a lot of synths, but it turns out it was exactly the album The Decemberists had to make — ‘I’ll Be Your Girl’ is their best in years.”—BrooklynVegan

“Absorbing… The Decemberists know how to seize the day”—MOJO

“From folk and prog to metal and indie, they’ve embraced each new frontier”—Uncut

“a strong and thoroughly enjoyable record – full of bold ideas, bright colours and the charm and lyricism that make The Decemberists so fundamentally engaging... A genuine and welcome joy.”—Drowned In Sound
Posted by Robert Kinsler at 7:24 AM No comments:

Always great news when we get news that another Walter Trout album is on the way!

Pre-Order Goes Live with Lead Instant Grat Track “Me, My Guitar And The Blues” 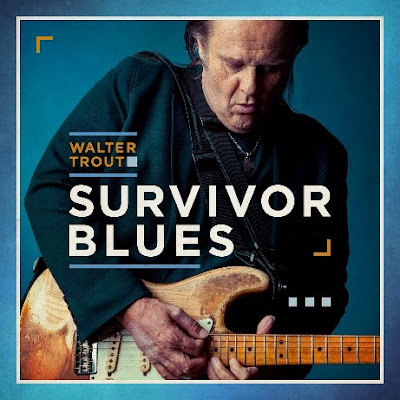 Now is the time to start thinking about 2019. Today comes news that famed singer/actor Hugh Jackman (Les Misérables, The Greatest Showman, X-Men franchise) will be going on a global tour next year, including a two-night engagement at the Hollywood Bowl. Tickets for most dates go on sale beginning Friday, December 7, 2018. See the media release below for more details... 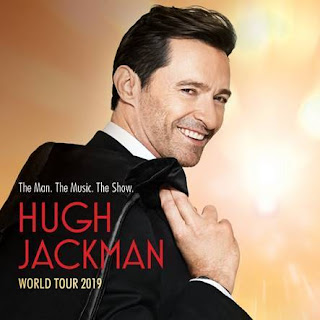 The tour will kick off with 12 shows across Europe and the UK beginning Monday, May 13th in Hamburg, Germany at Barclaycard Arena, with stops in Amsterdam, Paris, Manchester, Dublin, and London, with two shows at The O2 Arena.  The 22-city North American leg will begin Tuesday, June 18th at Toyota Center in Houston, TX, with stops in Chicago, Toronto, Boston, Las Vegas, and New York, with two shows at Madison Square Garden, as well as two performances at the Hollywood Bowl in Los Angeles.

Tickets go on sale beginning Friday, December 7.  Tickets will be available in Europe and the UK at 9 AM local time and in North America at 10 a.m. local time at HughJackmanTheShow.com.  A limited number of exclusive VIP packages will be available. These exclusive offers can include an amazing selection of reserved-seated tickets, custom merchandise (designed exclusively for package purchasers) and much more.  For more information please visit HughJackmanTheShow.com. 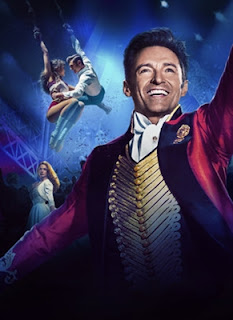 Hugh Jackman has made an impression on audiences of all ages with his multi-hyphenate career persona, as successful on stage in front of live crowds as he is on film. From his award-winning turn on Broadway as the 1970s singer/songwriter Peter Allen, to his metal claw-wielding Wolverine in the blockbuster X-Men franchise, Jackman has proven to be one of the most versatile actors of our time.

Jackman garnered his first Academy Award® nomination, for Best Actor, for his performance in Tom Hooper’s Les Misérables, based on the popular stage show created from Victor Hugo’s famous novel of the same name. Jackman’s standout performance as protagonist Jean Valjean also earned him a Golden Globe Award for Best Actor in a Comedy/Musical, as well as Screen Actors Guild (SAG) Award® nominations, for both Best Ensemble and Best Male Actor in a Leading Role, and a BAFTA Award nomination. Most recently, he was nominated for his role as P.T. Barnum in The Greatest Showman. Sales for the soundtrack to the film have broken records the world over and reached multi-platinum status in many countries including the UK and America.

HUGH JACKMAN – THE MAN. THE MUSIC. THE SHOW

*tickets for the Madison Square Garden shows go on sale Monday, December 10th at 10 AM local
+ The on-sale date for the Hollywood Bowl shows will be announced soon

About Robert Fox Ltd
Robert Fox has produced over sixty shows in the West End, Broadway and Australia. He produced Hugh Jackman in the musical The Boy From Oz about Australian entertainer Peter Allen on Broadway, as well as the Australian Arena tour of the same show. He also produced Hugh Jackman’s Back on Broadway and Broadway to Oz. Other productions include David Bowie’s Lazarus, Skylight, The Audience, God of Carnage, The Breath of Life, Another Country, The Blue Room, The Lady in the Van, Chess. Film and TV credits include Netflix’s The Crown, The Hours, Atonement, Iris, Notes on a Scandal. For more information visit www.robertfoxlimited.com.

Posted by Robert Kinsler at 9:23 AM No comments: 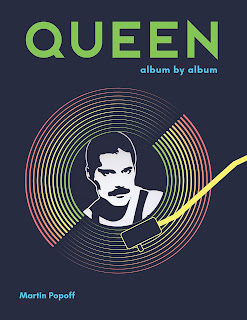 Title: Queen: Album by Album
Author: Martin Popoff
Publisher: Voyageur Press
Tell me more: With the commercial success of the 2018 motion picture "Bohemian Rhapsody" there has been an explosive interest in the music of the British rock quartet Queen. The release of author Martin Popoff's Queen: Album by Album is an inviting place for both casual and long-time fans of the Rock and Roll Hall of Fame band to learn more about the enduring work of Freddie Mercury (vocals, keyboards), Brian May (guitar, vocals), John Deacon (bass) and Roger Taylor (percussion, vocals).  When readers get the beautiful 224-page Queen: Album by Album they are getting the insight of renowned rock journalist Popoff along with the perspective of a number of knowledgeable music notables including Sir Paul McCartney, Darius Rucker (Hootie & the Blowfish), Dee Snider (Twisted Sister), Roger Manning, Jr. (Jellyfish, Beck), Derek Shulman (Gentle Giant) and many more who add their impressions and expertise on the band's first 15 albums (this includes all Queen LPs released during Mercury's lifetime and Made In Heaven released four years after his death). In addition to a full examination of each of the Queen albums the fully-illustrated book features live performance and behind-the-scenes photography along with a wealth of Queen ephemera like tickets and posters. Information: amazon.com. 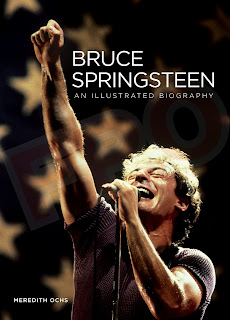 Title: Bruce Springsteen: An Illustrated Biography
Author: Meredith Ochs
Publisher: Becker&Mayer! books
Tell me more: The beautiful hardcover Bruce Springsteen: An Illustrated Biography spans 182 pages and includes a myriad of images of the New Jersey rocker spanning his 50-year career. While the wealth of dynamic color and black & white images and 10 pieces of removable memorabilia (including Bruce Springsteen's draft card that saved him from being shipped off to Vietnam) will catch any fan's eye, author Meredith Ochs' wonderful writing style capturing the depth and range of Springsteen's singular career as recording artist and performer is equally essential. The volume offers all the high marks of Springsteen's distinguished career including and up to his recent "Springsteen on Broadway" series of performances in New York City. Information: QuartoKnows.com. 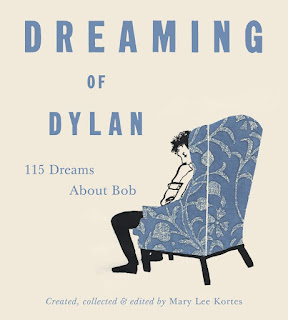 Title: Dreaming of Dylan: 115 Dreams About Bob
Author: Created, collected & edited by Mary Lee Kortes
Publisher: BMG Books
Tell me more: Isn't it appropriate that one of the most interesting and original music-minded book titles of 2018 is focused on Bob Dylan? Dreaming of Dylan: 115 Dreams About Bob will appeal to not only fans of Robert Allen Zimmerman but of poetry and the burgeoning field of understanding dreams. Brooklyn, New York-based author/musician Mary Lee Kortes has collected and compiled a collection of terrific writings where guests ranging from Patti Smith and Kevin Odegard to Jimbo Mathus (of Squirrel Nut Zippers fame) and everyday fans of Dylan have contributed their slumber time-gathered remembrances alongside more than 100 original illustrations, photographs and colorful images that adorn the 160-page hardcover edition. With dreams anything is possible as evidenced by wonderful nocturnal turns where Dylan is president, can be found fishing alongside a remote lake and even serving as a band mate of one dreamer. A terrific gift for any music fan. Information: IndieBound.org. 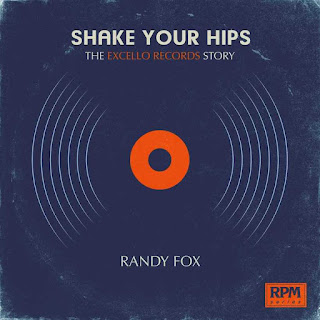 Title: Shake Your Hips: The Excello Records Story
Author: Randy Fox
Publisher: BMG Books
Tell me more: Part of BMG Books' newly-launched "RPM Series," Shake Your Hips: The Excello Records Story is artfully-sized at 7"x7" to mimic the classic dimensions of a 45 rpm record. The 200-page title delves into the history and influence of the groundbreaking record label Excello Records and its sister Nashboro label (the other initial volume in the series The Sub Pop Records Story offers a glimpse into the Seattle-based Sub Pop Records). Author Randy Fox, a Nashville-based author and deejay, has researched and lovingly restored the range of behind-the-scenes players and artists whose mix of Southern rock 'n' roll, jump blues, gospel, early R&B and Cajun-flavored swamp styles emerged out of Nashville, Tennessee in the early 1950s. The parade of influential artists celebrated includes Slim Harpo, the Prisonaires, Arthur Gunter, Lightnin' Slim and Lazy Lester. There are  also 16 pages of historic black & white photos included in the wonderful paperback. Information: amazon.com. 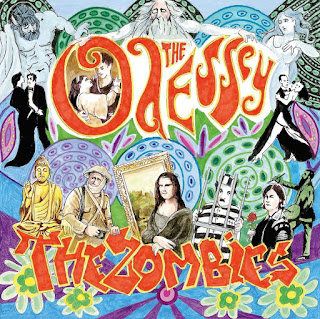 Title: The "Odessey": The Zombies in Words and Images
Authors: Rod Argent, Colin Blunstone, Hugh Grundy, Chris White
Publisher: Reel Art Press/BMG Books
Tell me more: Although The "Odessey": The Zombies in Words and Images was published in 2017, the lavish 152-page hardcover book has received renewed attention in 2018 with the 50th anniversary of The Zombies' 1968 masterwork Odessey and Oracle. With the Zombies once again nominated for induction into the Rock and Roll Hall of Fame, this amazing journey through the seminal '60s-spawned band's career is fully captured via the memories of original members Rod Argent (keyboards, vocals), Colin Blunstone (lead vocals), Hugh Grundy (percussion) and Chris White (bass guitar, vocals). Fully illustrated, the volume features plenty of photographs from throughout the troupe's 50+ year run and the original artwork of artist Terry Quirk (who completed the cover of Odessey and Oracle a half century ago) and Vivienne Boucherat (who created mixed media artwork for each song). If you hurry, you can get a copy of the incredible book signed by original members Argent and Blunstone via the group's official website. Information: TheZombiesMusic.com.

Posted by Robert Kinsler at 10:20 PM No comments: