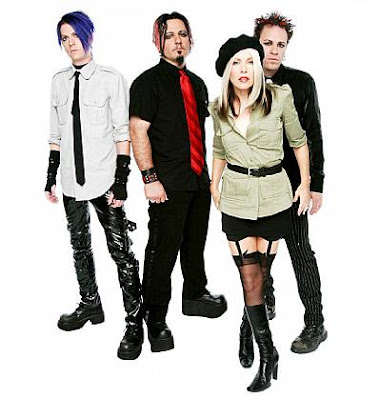 Berlin, one of the most successful and influential bands to emerge out of the Orange County music scene, will headline at the Coach House in San Juan Capistrano on Friday night, Nov. 28.
Terri Nunn, lead singer of the techno-pop group that formed in Orange County in the late 1970s and rose to international fame in the early 1980s, reflected in a recent e-mail interview how much she enjoys returning here to perform.
"Orange County had a very open ear to new music and still does," noted Nunn, who now lives in the Los Angeles area.
"The people there were situated in an area that could get two extremely influential stations, KROQ in Pasadena and 91X in San Diego; both amazing stations for new, cutting-edge music. So we had an audience and two radio stations willing to take a chance on us. Without you guys, we would never have happened. There is nothing like playing your hometown and I am honored to get the opportunity to play for the people of Orange County especially."
Berlin's first release with Nunn on vocals was 1982's "Pleasure Victim," a seven-song disc that featured a number of groundbreaking new wave tracks, including "The Metro," "Masquerade" and the controversial "Sex (I'm A …)."
"Sonically, we were inspired by the European synthesizer bands Kraftwerk and Ultravox, and found other musicians to work with who felt like we did," Nunn explained. "It took writing and arranging a lot of songs to find the right balance of sounds that became the Berlin sound. I would have to say it was 'The Metro' that finally defined it for us. When we finished that, all of us were literally, "Wow! That's what we want the rest of this record to be like!'"
When Berlin hits the stage in San Juan Capistrano on Nov. 28, fans can expect to hear many of the tracks off "Pleasure Victim," as well as subsequent hits such as "No More Words" and "Take My Breath Away," the latter from the 1986 movie "Top Gun."
Although Berlin disbanded in 1987, Nunn reformed the group in 1999 and since has seen acclaim and recognition for the important musical outfit only grow. In addition of 2002's "Voyeur" focusing on new material, Berlin's full-length 2005 effort "4play" featured the band delivering a number of energetic covers of tracks such as Prince's "Erotic City" and David Bowie's "Fashion."
Nunn says fans of Berlin can look forward to several new projects she is working on that should see the light of day in 2009.
"A new album is happening, and it doesn't have a title yet. But I am very excited by the new writers I am working with now. It is still very electronic, with a little goth edge at times. There is also a concert event I'm putting together called 'Girls Night Out.' I am bringing together the best women artists in music today to sing not just on the same bill, but sing together. This is a once-in-a-lifetime event and I am thrilled," Nunn said.
Nunn said she is thrilled to still be performing with Berlin, almost 30 years after bassist John Crawford saw her ad placed in the Musician's Contact Service in Hollywood in which she said she was looking to sing in a "unique" band.
"I am very fortunate to still be able to do this as my job," Nunn acknowledged.
"I enjoy it more now than I ever did. Someone asked me the other day, when in my career did I finally feel I could sing? God, it took me 10 years just to feel like I had a tiny handle on it. … Now I feel like back at the beginning when I sang for fun, without an agenda. I can create whatever I want, and now I get to do it without being so freaked out all the time. It pays to stick with something."
Posted by Robert Kinsler at 2:42 PM 1 comment: 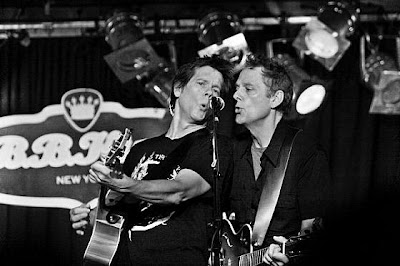 The Bacon Brothers, from left, Kevin and Michael Bacon.

But none of those film stars has enjoyed the well-deserved critical praise for their music that has greeted the Bacon Brothers, the group featuring acclaimed actor Kevin Bacon and his older brother, Emmy Award-winning composer Michael Bacon.
The Bacon Brothers have just released "New Year's Day," the siblings' sixth album. The duo will feature songs from that release in a headlining show at the Coach House in San Juan Capistrano on Nov. 21.

From the infectious countryfied power pop of "Tell Me What I Have To Do" and authentic reggae-fueled "Bunch Of Words" to the lush melodic rock of "Architeuthis" and rocking title track, "New Year's Day" is an album that captures the brothers' collective talents as singers, songwriters and musicians.

"Every time I record something, I think that's the last one (song); the (tap) has been turned off. But the songs have kind of just kept coming," Kevin Bacon said in a recent phone interview. "I feel really good about the songs."
Michael and Kevin Bacon were raised in Philadelphia, so it's not surprising that soul is a part of their sound. As evidenced by the tracks on "New Year's Day" and 2005's "White Knuckles," country, folk, reggae, funk and an increasing number of other styles fit into a sonic brew that sounds both classic and contemporary.
"In some ways, this album feels a little bit more cohesive than the last one," said Kevin Bacon, a gifted actor whose range of eclectic performances have been featured in well-known movies including "Apollo 13," "JFK," "Footloose," "The Woodsman," "Tremors" and "A Few Good Men." His real-life role in the Bacon Brothers finds him sharing lead vocal duties with his brother. Both Bacons play guitar, while Kevin also plays harmonica and Michael plays cello.
The Bacon Brothers' top-notch band features Paul Guzzone (bass, guitar), Ira Siegel (guitar, mandolin), Frank Vilardi (drums, percussion) and Charlie Giordano (keyboards, accordion, melodica).

Michael Bacon, whose professional music career began in the late 1960s as a member of the Philadelphia band Good News, said the brothers share a life-long bond of making music together.
"Kevin was probably still in diapers. I don't ever remember a time where I didn't think it was a really good idea for us to play music together," said Michael Bacon during the interview, noting he bought Kevin his first guitar when he was young and taught him how to play his first song, the Beatles' "Hey Jude."
When the Bacon Brothers released their debut "Forosoco" in 1997, it was common for music writers to cover the group only because Kevin Bacon was a member. Today, the focus is usually on the depth and range of songs that the brothers play.
"If you want something, you have to work long and hard for it. We certainly didn't expect any shortcuts (because of his fame)," Kevin Bacon said.
Many local musicians will relate to Kevin's story about some of the Bacon Brothers' early shows.
"We were moving our own gear in Michael's station wagon," Kevin said.
"For one thing, it sort of keeps you about (realizing) how difficult this thing is. And I think people appreciate that you are not that (conceited) because of the movie star thing."
Both brothers said their primary objective when they play the Coach House is to put on a great concert.
"The most important thing is to have a great live show because you cannot digitize, you cannot download a live show," Michael noted.
Online: www.thecoachhouse.com

Posted by Robert Kinsler at 5:19 PM No comments: