Earlier today there was a major Coachella update, and now Omega Events has announced the final names added to the upcoming Doheny Blues Festival lineup! Doheny will be the place to be the weekend of May 21 & 22, 2016!

So, here is the complete  2016 lineup for Doheny Blues Festival:

ONLINE: Purchase Weekend Passes online through our secure ticketing site.
PHONE: (949) 360-7800, Monday-Friday, 10 a.m. - 4 p.m.
EMAIL: tickets@omegaevents.com
PLEASE NOTE:
1. All sales are final; there are no refunds.
2. All prices listed are "per person."
3. Tickets are non-transferrable and non-refundable.
4. We are not responsible for lost or stolen tickets.
5. Weekend Passes are NOT available at the gate.
6. Weekend Passes are only good for one person for the entire weekend.
7. Weekend Pass Holders must wear their wristband for the duration of the festival weekend.
8. All customers purchasing tickets to the Doheny Blues Festival agree to the festival guidelines and ticket policies.
9. Ticket policies, privacy policies and photo policies are available on the Doheny Blues website.
9. Single Day Passes are available for purchase at the gate for $10 more, while supplies last.
10. Artists and times are subject to change without notice; the festival is rain or shine.
Posted by Robert Kinsler at 4:43 PM No comments: 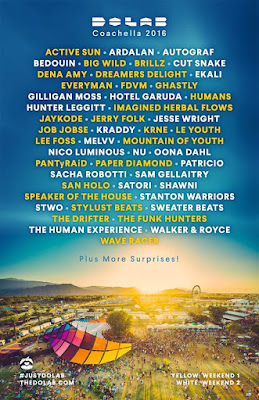 Take a look back at last year's DoLab happenings via this fun video:

Posted by Robert Kinsler at 2:45 PM No comments:

With the recent passing of Earth, Wind & Fire's Maurice White (on Feb. 3, 2016) and Jefferson Airplane's Paul Kantner (on Jan. 28, 2016), it's nice to see both of those seminal artists among those being honored at the upcoming "GRAMMY Salute to Music Legends." Here is the media release... 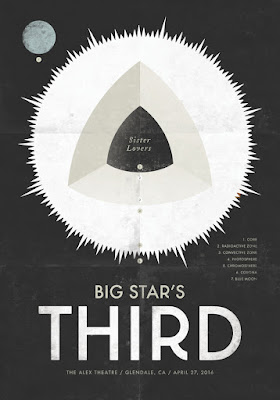 Posted by Robert Kinsler at 8:44 AM No comments:

Watch the latest episode of MUSIC WORTH BUYING where Robert and TJR discuss the debut release from Supersonic Blues Machine, as well as Dream Theater's The Astonishing:

Posted by Robert Kinsler at 11:23 PM No comments:

Majestic returns from modern-day guitar hero Joe Bonamassa and Southern hard rocker 3 Doors Down, as well as the release of a wonderful tribute to George Harrison and enthralling documentary about '80s hard rock hit makers Twisted Sister are among a parade of fantastic new releases available. Also worth discovering is an unreleased collection of outstanding recordings from the late Jeff Healey and the debut album from power-pop trio Yorktown Lads.

Artists: Brian Wilson, Cold War Kids, Dhani Harrison, Norah Jones, Ben Harper, more
Title: George Fest: A Night to Celebrate the Music of George Harrison (Universal Music)
You might like if you enjoy: Ann Wilson, Ian Astbury, Brian Wilson, George Harrison
Tell me more: On Sept. 28, 2014, a diverse and potent line-up of musicians gathered at the Fonda Theatre in Los Angeles for "George Fest," a night to celebrate the music of George Harrison. Now that once-in-a-lifetime concert event is available as a deluxe edition with the complete audio recording featured on two audio CDs and the concert film itself on a DVD. Many of the performances are faithful to Harrison's iconic recordings, including a stunning "I Me Mine" (featuring Brett Daniel of Spoon), "I Got My Mind Set On You" (with the Killers' Brandon Flowers on lead vocals) and a shining take on the Traveling Wilburys gem "Handle With Care" that features Flowers, Daniel, Dhani Harrison, "Weird Al" Yankovic and Jonathan Bates. Elsewhere, the arrangements likewise honor the original Harrison tracks but with enough variation to keep it interesting (Heartless Bastards' Americana-styled "If Not For You," Jamestown Revival's folk-rock take of "If I Needed Someone" and Black Rebel Motorcycle Club's brooding "Art of Dying"). Information: GeorgeHarrison.com.

Artist: Twisted Sister
Title: We Are Twisted F***ing Sister! (Music Box Films)
You might like if you enjoy: Quiet Riot, Twisted Sister
Tell me more: Fans who caught Andrew Horn's We Are Twisted F***ing Sister! when it was shown in movie theaters in February 2016 can now add the documentary film to their personal collection. Despite that it appeared as if the New York quintet's appearance on rock radio (with the 1984 singles "We're Not Gonna Take It" and "I Wanna Rock") was a overnight success story, Twisted Sister spent years without a record deal. Interviews with the band members, management, fans and archival footage provide a compelling tale of a band that persevered despite all odds and the film takes a universal approach in examining what it takes for an ensemble to find success via a long journey from bars and dives to the big time. Available on DVD, Blu-ray and digital formats, We Are Twisted F***ing Sister! is one of the more interesting music documentaries in memory. Information: TwistedSister.com and TwistedSisterTheMovie.com.

Artist: 3 Doors Down
Title: Us and the Night (Republic)
You might like if you enjoy: Daughtry, Three Doors Down
Tell me more: Long-time fans of Mississippi-spawned rockers 3 Doors Down will find plenty to savor via the riff rockers and ballads that grace the band's satisfying sixth album Us and the Night. Singer Brad Arnold and company have consistently been able to blend hard and alternative rock styles with lyrics that typically address the highs and lows of romance, or introspective themes; the band does that here on their first new full-length disc since 2011's "Time of My Life." The spirited anthem "The Broken," in-the-pocket heavy rocker "Still Alive" and affecting ballads "Inside of Me" and "Pieces of Me" are among the standouts on a very solid return. Information: 3doorsdown.com.

Purchase 'Us And The Night' on audio CD

Artist: Joe Bonamassa
Title: Blues of Desperation (J&R Adventures)
You might like if you enjoy: Walter Trout, Joe Bonamassa
Tell me more: Few modern-day artists are as talented as singer-songwriter-guitarist Joe Bonamassa, who was seemingly born to play guitar (indeed, the New York native began playing the instrument when he was four and was only 12 when he opened a string of dates for B.B. King in 1989). Bonamassa is also prolific, having just released his 12th studio album (Blues Of Desperation) since 2000. And that doesn't include a number of live albums and concert films, and several high-profile collaborations with the likes of singer Beth Hart and Black Country Communion. It speaks volumes about Bonamassa's gifts that Blues of Desperation has the sound and firepower of a hungry bluesman's debut. The 11 original songs tap into British, Chicago and Southern blues traditions, with Bonamassa having worked with other songwriters and recorded in Nashville to push his talents in new directions. The fiery and virtuoso guitar work thankfully remains intact (notably on an extended lead in "No Good Place for the Lonely"), but there are forays that provide evidence that Bonamassa remains a hungry artist interested in exploring new territory. The glorious English-meets-Southern-fried title track, breezy country blues of "The Valley Runs Low" (with his voice positioned against a trio of female vocalists) and uptempo Chicago blues burner "You Left Me Nothin' but the Bill and the Blues" are among this writer's faves. Information: jbonamassa.com.

Get 'Blues Of Desperation' right here

Artist: Jeff Healey
Title: Heal My Soul (Mascot Label Group)
You might like if you enjoy: Gary Clark Jr., Jimi Hendrix, Ten Years After
Tell me more: Released in connection with what would have been singer-guitarist-songwriter Jeff Healey's 50th birthday, Heal My Soul features a dozen previously-unreleased songs recorded by the legendary artist between 1996 and 1998. The opening track "Daze Of The Night" is a flat-out blues rockers, filled with soaring guitar work and unbridled energy. The psychedelic-anchored "Moodswing" recalls the experimental touch of Hendrix, while the album is loaded with tuneful classic rock-worthy material ("Baby Blue," "Misunderstood," "Love In Her Eyes" and "It's the Last Time" in particular) and a beautiful acoustic ballad "All the Saints." Want to have some fun? Listen to Healey's original "Please" with headphones (and the dueling guitar leads battling during the track's breathtaking finish). A joyful introduction - or reintroduction - to the talented Healey who sadly lost his battle against cancer on March 2, 2008. Information: jeffhealey.com.

Artist: Yorktown Lads
Title: Songs About Girls and Other Disasters (Crab Apple Records)
You might like if you enjoy: Tommy Keene, Matthew Sweet, sparkle*jets u.k.
Tell me more: Although the debut album from power-pop trio Yorktown Lads was issued in 2015, lovers of all things vinyl and melodic rock will want to discover the collection titled Songs About Girls and Other Disasters that comes wrapped in a gatefold cover with full lyrics and colorful artwork. Cameron Lew, Addison Love and Michael Simmons have come up with a strong set of shimmering originals including the uptempo "Something to Write About," infectious "Rewind" and wistful ballad "Home." Songs About Girls and Other Disasters is available via red translucent 180 gram audiophile quality vinyl, and every LP comes with a download card so even those without a turntable can get a listen to this essential release. Information: YorktownLads.com.

Purchase 'Songs About Girls and Other Disasters' here today