Sturgill Simpson set to return via 'A Sailor's Guide to Earth'

Sturgill Simpson's 'Metamodern Sounds in Country Music' was truly one of the best albums of 2014 (although I discovered the disc leading up to the artist's performance at Coachella in April 2015). Here is exciting news I received over the weekend related to his next album, 'A Sailor's Guide to Earth'... 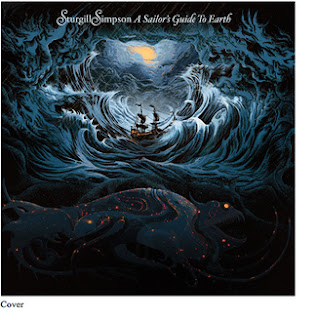 
Sturgill Simpson’s highly anticipated new album A Sailor’s Guide To Earth will be released April 15 on Atlantic Records and is now available for pre-order.
In advance of the release, the first single, “Brace For Impact (Live A Little),” is premiering today and can now be heard at SturgillSimpson.com. An instant download of the single is included with each album pre-order.


Produced by Simpson, A Sailor’s Guide To Earth was written—beginning to end—as a letter to his first child who arrived during the summer of 2014 and features eight original songs as well as a rendition of Nirvana’s “In Bloom.”

In celebration of the release, Simpson and his band will kick off their 2016 tour this spring, including shows in Austin, Dallas, Houston, Oklahoma City, Lexington, Chattanooga, Knoxville, Indianapolis, Louisville, Royal Oak, MI, Chicago, Milwaukee and Minneapolis. Tickets go on-sale next Friday, March 11. Additional dates to be announced.

A Sailor’s Guide To Earth is Simpson’s third full-length album and follows his break-through, Grammy-nominated 2014 release, Metamodern Sounds In Country Music. Beloved by critics and fans, the record was featured on year-end “best of” lists at The New York Times, Rolling Stone, the Village Voices’ Pazz and Jop, Rolling Stone Country, NPR Music, American Songwriter, Stereogum, the Los Angeles Times, KCRW, Pitchfork, The Washington Post and many others.