Rancid celebrates its legacy with an energetic sold-out show 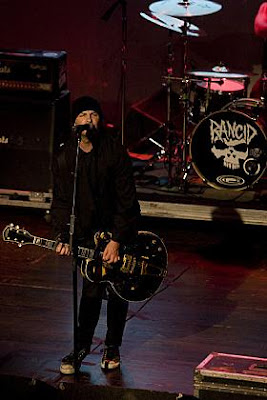 Photo credit: DREW A. KELLEY, FOR THE ORANGE COUNTY REGISTER
Photo info: Tim Armstrong performed with his band Rancid at House of Blues Anaheim on Saturday night, Sept. 20.
This story was posted on www.ocregister.com on Sunday, Sept. 21, 2008
Rancid – both as a band and skilled architect of strong punk rock – has come a long way since the release of its self-titled debut in 1993.
Performing before a packed crowd at the House of Blues in Anaheim on Saturday night (Sept. 20, 2008), the Bay Area quartet played 28 songs showcasing scorching material such as "Adina" and "Rejected" from Rancid's 15-year-old eponymous disc, as well as the more artfully arranged sonic attack displayed on the ska-tinged "Fall Back Down" from 2003's "Indestructible."
Rancid singer-guitarist Tim Armstrong noted at the start of his band's set that the thoughts of all the night's performers were with former Blink-182 drummer Travis Barker, who is a band mate of Armstrong's in the Transplants, and the others aboard a jet that crashed in South Carolina late Friday.
As of the time this review was written on Sunday morning (Sept. 21, 2008), Barker and celebrity disc jockey DJ AM were expected to fully recover from burns they suffered. However, four other people aboard the Learjet were killed in the crash.
Rancid has been a favorite of the indie punk scene since emerging from the underground with 1995's "… And Out Come the Wolves," and the group (rounded out by bassist-singer Matt Freeman, lead guitarist-singer Lars Frederiksen and drummer Branden Steineckert) continues to deserve its place as a leader of the genre.
Hard, fast tunes are Rancid's favored method of attack, so it's no wonder the band was able to play more than two dozen titles in a mere 75 minutes. A blazing "Black and Blue," Clash-styled "Roots Radicals" and fiery "Maxwell Murder" (the latter displaying Freeman's amazing talents) were among the many songs that had the bravest of souls engaging in as wild a mosh pit as I've ever witnessed at the House of Blues.
Over the past four years, whenever I go to House of Blues, I usually chat for a minute or two with Alex Peguero, a member of the security staff at House of Blues. Perhaps he put it best when giving me his own mini-review of the show.
"The minute Rancid came on, it looked like that curtain," he said in comparing the large multi-colored patchwork of shapes and colors to the huge mosh pit and ordered chaos. "It was energy."
Although the two opening acts were not able to match the power of Rancid's memorable set, both New York City hardcore troupe H2O and Los Angeles female punk foursome Civet each scored with the crowds with vigorous outings.
Capturing the assault of old school '70s L.A. outfits such as the Weirdos and the Dogs, Civet got better as its 30-minute set went along. The romance-gone-bad-themed shout-outs were at their finest in the aptly-titled "Alibis" and set-ending "Hell Hath No Fury."
H2O was similarly effective, with the group focusing on material from the newly-released album "Nothing to Prove." Originals such as "1995," "Nothing to Prove" and especially catchy "Fairweather Friend" served as both sing-alongs and fuel for the slam floor.
Posted by Robert Kinsler at 7:54 AM No comments:

Acoustic Eidolon to play Lord of the Strings dates this weekend 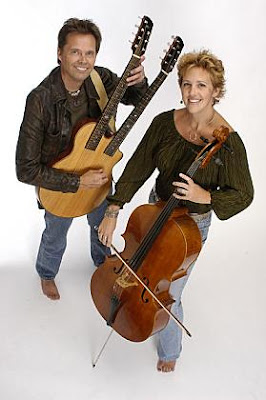 It's no exaggeration for discerning listeners to assert that guitarist Joe Scott and cellist Hannah Alkire have created a sound that they can call their own.
Since joining forces in April 1998, the two members who make up Acoustic Eidolon have embarked on a musical journey that has produced scores of wonderful concerts and excellent recordings.

The fact that Scott plays an instrument he invented – a double-neck, custom acoustic guitar known as a guitjo – helps establish that unique sound. And no matter whether Acoustic Eidolon is playing material fused with folk, Celtic, Latin or bluegrass influences, the sound is intoxicating and accessible.
The duo's music has been featured on National Public Radio's "All Things Considered," as well as countless other television and radio stations around the country.
Scott and Alkire have performed at the Vancouver Island MusicFest, the legendary Kerrville Folk Festival in Texas, the Kennedy Center in Washington D.C. and at St. Paul's Cathedral in London. And Acoustic Eidolon will spend the better part of October playing a string of shows in Germany and the Netherlands.

However, before heading across the Atlantic, Acoustic Eidolon will make two intimate performances in south Orange County this weekend as part of the Lord of the Strings concert series, performing at the Dana Point Community House on Friday, Sept. 19 and playing in nearby Mission Viejo on Saturday evening, Sept. 20.
Acoustic Eidolon is touring in support of the duo's most recent album, "Barefoot," a collection of material blending the far-flung sounds of Australia, Hawaii, gypsy dance music and Irish-Celtic via nine instrumentals and five vocal-anchored tracks.
The sonic team's other releases include "Live to Dance" (2004), "Beyond Words" (2001), the Christmas-themed "Joy to the World" (2002) and "A Simpler Time" (2000).

Acoustic Eidolon's self-titled debut was issued in 1999. Highlights on that disc include the Celtic-tinged "Walking Stones" and Delta-mining "Joe's Blues."
Acoustic Eidolon will perform at the Dana Point Community House, 24642 San Juan Ave., Dana Point, at 7:30 p.m. Friday. The duo will also perform at the Mission Viejo Civic Center, 200 Civic Center, Mission Viejo, at 7 p.m. Saturday.
Information: www.lordofthestringsconcerts.com or call 949-842-2227.
Posted by Robert Kinsler at 9:36 AM No comments: 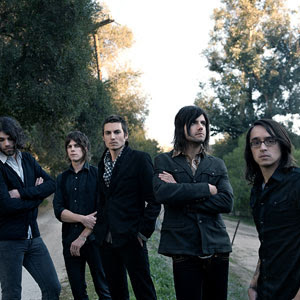 AUGUSTANA: The band features (left to right) keyboardist John Fredricks, guitarist Chris Sachtleben, vocalist Dan Layus, drummer Justin South and bassist Jared Palomar.
This story was originally published in the Orange County Register on Tuesday, Sept. 9, 2008.
Orange County residents attending the highly anticipated concert featuring headliners Counting Crows and Maroon 5 at Verizon Wireless Amphitheater in Irvine on Friday night (Sept. 12, 2008) should plan on an early arrival.
That's because the opening act on the bill, Augustana, is set to hit the stage at 7 p.m. sharp.
Augustana's most recent material ranges from the jangly rock of "I Still Ain't Over You" and the soaring Keane-flavored "Sweet and Low" to the piano anchored "Fire" and powerful rocker "Dust."
The show will be a homecoming of sorts for drummer Justin South, a 2001 graduate of Dana Hills High School who moved from his native Dana Point to Pasadena to attend college before joining Augustana in mid-2004.
"At the time, I was working a dead end job and relocated (back) to Orange County," recalled Justin, now a resident of San Clemente. "All through college, this is always what I wanted to do."
Augustana had a hit with "Boston" on its debut album, "All the Stars and Boulevards," released in 2005.
And since the release of the band's sophomore album "Can't Love, Can't Hurt" on April 29, the group has found even more acclaim via radio airplay and television appearances, as well as strong live performances.
"On the first record, we were inspired from some of the English influences (Keane, Coldplay, Snow Patrol) and Tom Petty," South said of the sonic origins of Augustana when interviewed via cell phone recently. The band had just performed in Houston the night before and he was on his way to perform in Dallas later that night when we spoke on Saturday morning.
In addition to South on percussion, Augustana features Dan Layus (vocals, piano, guitar), Jared Palomar (bass, vocals), Chris Sachtleben (guitar, mandolin) and John Vincent (keyboard, vocals).
Augustana has a large fan base, as evidenced by the song "Boston" logging more than one million digital downloads and the collection of more than 161,000 friends on its My Space site. In addition, the quintet has appeared on "The Late Show with David Letterman," "The Ellen DeGeneres Show" and "The Today Show."
Even more thrilling for South, is that Augustana has opened for well-established rock acts such as Snow Patrol and Dashboard Confessional.
"It has been awesome; we've learned a lot touring with bands like that," said South. "Its been cool to have so many bands championing around us."
When asked what it will feel like to perform in front of thousands of fans in Orange County, South even grew more animated: "It's the coolest thing ever. Growing up and going to shows at Verizon and now opening for two great bands, it's awesome."
For more information on Augustana, visit the band's Web site at www.myspace.com/augustana.
Posted by Robert Kinsler at 7:42 AM 2 comments:

Another magical reunion show from Toad the Wet Sprocket 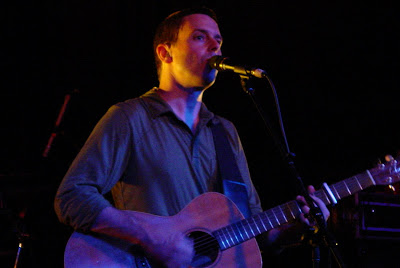 I can't believe it has been almost a week since I caught Toad the Wet Sprocket at the Coach House.
Playing before an enthusiastic, capacity crowd on Saturday night, Aug. 30, the folk-rock foursome delivered a wonderful 90-minute concert. It marked the first time since Aug. 19, 2006, that the Santa Barbara-launched group performed in Orange County.
Singer-rhythm guitarist Glen Phillips (seen here in a photo I snapped during the recent show), lead guitarist-occasional lead singer Todd Nichols, bassist Dean Dinning and drummer Randy Guss performed a generous 21-song set that included all of the group's '90s hits, as well as a number of album tracks that are rightfully loved by the band's loyal following.
Kicking things off with my favorite Toad song, the timeless "Something's Always Wrong," the group was on from song number one. Indeed, the outfit appeared to fully enjoy the night and played with its characteristic laid back approach that works thanks to an always-personable vibe, wonderful musicianship and the winning songs themselves.
Highlights were many: the haunting "Rings" and driving "Whatever I Fear" off "Coil," an alt country-styled take on "Stupid" and "Good Intentions," and accessible hits such as "Walk on the Ocean" and "All I Want" that put the band on the map.
There were also wonderful versions of "Brother" and "Crowing" played by the band that couldn't have been better.
Listening to this great band play such a rewarding collection of songs, it saddens me that I never see any of the troupe's albums - or Toad the Wet Sprocket itself - included in lists ranking the top rock albums and/or bands of the 1990s.
At one point on Saturday night - and I don't think I wrote it down - Glen spoke about hoping to come back again soon. I for one will be waiting.
Posted by Robert Kinsler at 7:33 AM No comments: