Big Country set to return with 'The Journey' on April 30

U.S. Tour includes stop at The Coach House on June 25

Celebrated Scottish band Big Country has returned with The Journey (April 30th / Megaforce), their first studio album in 14 years, and first with frontman Mike Peters. “When Bruce Watson called and asked me to sing for Big Country, it was something I didn’t need to think twice about,” says Peters, a good friend and a favorite singer of the late Stuart Adamson. “It’s been an incredible honor getting to know the music of Big Country intimately and a pleasure to be around such great musicians. I find singing the lyrics of Stuart Adamson very life affirming.”


Written and produced by the entire band, The Journey is a return to the classic Big Country sound; a shared vision of widescreen guitar melody, harmony and lyric. The lineup features Mike Peters, co-founder Bruce Watson, longtime drummer Mark Brzezicki, bassist Derek Forbes from Simple Minds, and guitarist Jamie Watson. “New music is always in the blood with Big Country, and so it becomes the life blood the band need to evolve,” says Brzezicki. “The new songs, along with the chemistry and timing, felt right.”


Green Day and U2’s hit cover of The Skids’ “The Saints Are Coming”, Adamson’s previous band, sparked Big Country’s reunion. Coinciding with their 30th anniversary, the band’s energy had been renewed, and soon they were performing the Isle of Wight (twice), V Festival, T in the Park, and many of the UK and Europe’s most famous festivals.

“When we are playing, it is as if we never stopped,” says Watson. “But I know we have, I know we suffered a great loss. But you heal…slowly.” I can assure you that Stuart will be there with us every night, in our thoughts, in our words, and in our hearts.”

In 1983, Big Country released The Crossing, the seminal album produced by Steve Lillywhite that broke the band massively worldwide with classic singles “Fields of Fire”, “Chance” and signature song “In a Big Country”. The run of success continued throughout the 1980′s with the release of the their second album Steeltown (1984), which debuted at Number 1 in the UK. They have opened for the Rolling Stones on two separate tours in the 90s, and Mick Jagger has called Big Country “one of the best opening bands we’ve ever had.”

Click here to hear "The Journey," the first single from the new Big Country album.

Catch Big Country on tour in the US this summer, and find them @BigCountryUK , BigCountry.co.uk and facebook.com/inabigcountry . 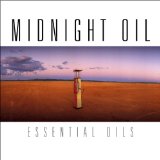 Speaking of fantastic bands that emerged in the 1980s, now comes word about the upcoming release of Essential Oils, the first double-CD chronology assembled on Australia’s Midnight Oil.The forthcoming collection contains 36 songs, handpicked by the band, and the tracklist covers every one of the band’s 12 studio albums (plus two of their rare 1980s EPs). It will be available April 30 via Columbia/Legacy.
Click here to get more details on Essential Oils.


Great Big Sea and dada are not the only bands celebrating their 20th anniversary with tours and special shows. Orange County's own PARKAIMOON has also persevered for 20 years. The band played their first offical show on March 12, 1993 at Club Mesa in Costa Mesa. So it's no surprise the group is having a weekend celebration with three shows scheduled: Thursday (tonight!) and Friday night are acoustic shows at Mahe and Quinn's respectively. Saturday night is the 20th anniversay show featuring the full band, and possibly a few guests, at Mahe in Seal Beach.
Visit www.Parkaimoon.com for more details on those shows!

Posted by Robert Kinsler at 1:49 PM