Happy Friday everybody! Here is the latest batch of releases to share... 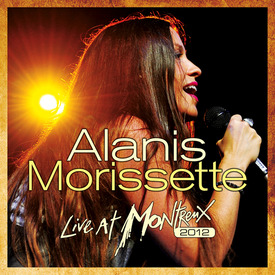 
Live At Montreux 2012 is Alanis Morissette’s first live release in 10 years. Filmed in high definition on July 2, 2012, this set features a blend of songs from her most recent album, Havoc And Bright Lights a bevy of her beloved hits: “Ironic,” “Hand In My Pocket,” “You Learn” and “Thank U,” as well as the revolutionary kiss-off “You Oughta Know.” This stop on the Guardian Angel tour (in support of Havoc) was Alanis’ third appearance at the famed Montreux Jazz Festival.

Of course, the sheer poetry and emotional spirit of Alanis Morissette’s music is what’s truly on display here. The genuine, honest soul-baring nature of her songs, carried by her instantly recognizable and absolutely unique vocal style is on evident on Live At Montreux. Alanis is one of the most successful female artists and songwriters of all time, having sold in excess of 60 million albums worldwide. It is plain to see why she has achieved such accolades when you witness a performance like this set at Montreux.

Click here to view a video of “Guardian”: http://www.youtube.com/watch?v=PJYHSfEKGG8

Eagle Rock Entertainment is the largest producer and distributor of music programming for DVD, Blu-Ray, TV, Audio and Digital Media in the world. Eagle works directly alongside talent to produce top quality, High Definition and 3D programs, both concerts and documentaries, including The Rolling Stones, Pink Floyd, The Who, Queen, The Doors, Jeff Beck, U2, Peter Gabriel, Paul McCartney and Ozzy Osbourne. Eagle is a Grammy Award winning company and has received over 30 multi-platinum, over 50 platinum and over 90 gold discs, worldwide. Eagle Rock Entertainment has offices in London, New York, Toronto, Paris and Hamburg.

Belinda Carlisle, best known to fans worldwide for her hugely successful solo career as well as the lead vocalist/songwriter of one of the most successful female bands of all time, the Go-Go’s, is the latest artist to get the ICON treatment with the release of Belinda Carlisle - ICON on March 19 through Universal Music Enterprises (UMe).

Carlisle was recently inspired to return to the studio where she recorded a new track, “Sun.” The new track is exclusively available physically on this ICON collection as well as digitally available on Best Of, both which brings Carlisle’s biggest hits together on one album. “Sun” will also be available for download as a digital single as well.


The first all-female band to write their own music and play their own instruments, The Go-Go’s, were the first to achieve a No. 1 album, Beauty and the Beat, which featured the hits "We Got the Beat" and "Our Lips Are Sealed." Although The Go-Go’s disbanded in 1985, Belinda Carlisle embarked on a solo career. Her Gold-certified solo album debut, Belinda, was released in 1986 and featured the #3 hit single "Mad About You." Carlisle returned with her second solo album in 1987, releasing Heaven on Earth which shot to Platinum certification within a few months, fueled by its #1 smash single, “Heaven Is A Place On Earth,” the #2 hit "I Get Weak," and the Top 10 "Circle in the Sand." Runaway Horses, Carlisle’s Gold-certified third solo album, was released in 1989 and included the hits "Leave a Light On" and "Summer Rain” all of which are featured on the ICON release.

Carlisle released four other solo albums before going on a musical hiatus, during which Carlisle penned her autobiography Lips Unsealed, which quickly reached the top of the NYTimes bestsellers list. She also launched Belindia, an Indian-inspired home goods textiles company which features designs by Belinda, inspired by her time living in India. Belindia's blankets and throws are produced in association with — and a portion of the proceeds go to — Shuktara Project, a Calcutta-based charity that offers care to abandoned children with disabilities.
In 2012, the Go-Go’s reunited to celebrate the 30th anniversary of their double-Platinum I.R.S. Records debut, Beauty and the Beat, with a remastered and expanded commemorative edition, a successful “Ladies Gone Wild” summer tour, and a new star on the Hollywood Walk of Fame.

2. Heaven Is A Place On Earth

6. Circle In The Sand

Seattle record label Fin Records have announced the signing of Brent Amaker and The Rodeo to their roster, as well as their upcoming full length Year of The Dragon, slated for release June 4th. Their fourth full length record, Year of the Dragon will be released on vinyl, cd, and digital download. Full album details, including the artwork, track list, and first single, will be announced soon.

When asked for a note on the upcoming Year Of The Dragon, Fin Records owner Christian Fulghum expressed his enthusiasm by stating, "Working with Brent Amaker and The Rodeo is fun because they are taking all-American Cowboy iconography and cross-breeding it with Krautrock and the Boys from Akron. The songwriting is by turns sly, funny, and subversive. My kind of music.”
Mr. Amaker noted, "This latest LP may just expand your perception of American Western music. We've been on a strange and wonderful trip these past several years and the new songs reflect that. Year of the Dragon is darker than previous stuff and more fully expresses where the band is going. And on top of that, I couldn't be happier to be releasing the next Rodeo LP under the Fin Records imprint. They produce a high quality product and they keep the focus on the artist. It's truly exciting to be part of their family. Now saddle up and get yourself ready!"

Fin Records is an up and coming label that has already given homes to a wide swath of acts ranging across a vareity of genres, from Hip Hop to Noise, to Country, and then some. Recently named "Local Record Label of The Year 2012' by the Seattle Weekly, the two year old label has recently released acclaimed works from the likes of J. Pinder, The Walkabouts, Red Jacket Mine, Long Distance Poison, Davidson Hart Kingsbery and many more.

Brent Amaker and the Rodeo will be playing in Olympia, WA next Friday, 3/8. at the Royal Lounge, and touring through out 2013. Stay tuned.

Nice way to decorate your walls. I have never done that. My effort to beautify the walls in my house was to order big-sized canvas prints from wahooart.com, from images of western art. I use the same angel motifs in all of the rooms painted by different painters, such as this one by very interesting English artist Stanley Spencer, http://EN.WahooArt.com/A55A04/w.nsf/OPRA/BRUE-8LT7K6