Fans of Ringo Starr and The Beatles have plenty of reason to celebrate today! Here is news from my The GRAMMY Museum in Los Angeles...If you have not been to this wonderful museum, sounds like you should plan to sometime between June and November!


First Major Exhibition To Explore The Life Of Ringo Starr 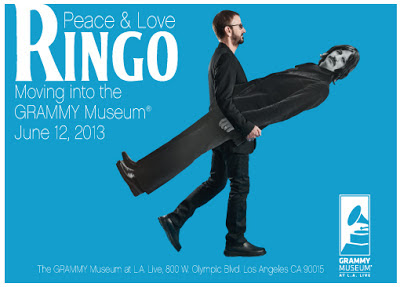 LOS ANGELES (March 6, 2013) — The GRAMMY Museum, in cooperation with Ringo Starr, will debut a major new exhibition, Ringo: Peace & Love opening on June 12, 2013. This one-of-a-kind, limited-run exhibit will offer visitors an unprecedented in-depth look at all aspects of Starr’s musical and creative life – as a musician, artist, actor, and as the man the world knows and loves simply as 'Ringo.' It will also aim to propel Starr’s universal message of peace and love.

Ringo: Peace & Love is both the first major exhibit ever dedicated to a drummer and the first to explore the extraordinary career of the 7-time GRAMMY Award® winner. The scope of exhibit spans Ringo’s early life growing up in Liverpool, from Raving Texans turned Rory Storm, from The Beatles, to becoming a solo artist and then to the All Starrs with whom he is on tour now – this unique collection brings together diverse artifacts, rare and never before seen photographs, documents, personal letters and footage.


Ringo: Peace & Love will be located on the second floor and will include:

The drum kit he played on the Ed Sullivan show

The cape he wore in Help!

Personal letters, photographs and documents from the Starkey family and Ringo’s days with the Beatles


It will also be an interactive exhibit, where visitors can take a drum lesson with Ringo.

"I’m honored that Ringo has chosen to work with us to create Ringo: Peace & Love,” said Bob Santelli, Executive Director of The GRAMMY Museum. "We are particularly excited to celebrate Starr’s extraordinary musical legacy with the legions of fans who admire him, as well as to introduce him to a new generation of music lovers.”

Ringo: Peace & Love will be on display in The GRAMMY Museum’s Special Exhibits Gallery through November 2013, after which the exhibit will tour to select cities to be announced soon.

Museum admission is $12.95 for adults; $11.95 for senior citizens (65+); and $10.95 for students with I.D. (ages 6 – 22) and members of the military. GRAMMY Museum members and children 5 and under are admitted free. Located at 800 West Olympic Boulevard, Suite A245, Los Angeles, CA 90015, with an entrance off of Figueroa Street, the Museum resides within the L.A. LIVE campus, at the intersection of Olympic Boulevard and Figueroa Street in downtown Los Angeles. For more information, please call 213.765.6800 or visit www.grammymuseum.org. For exclusive content, join the organization's social networks as a Twitter follower at www.twitter.com/thegrammymuseum, and on Facebook at
http://www.facebook.com/thegrammymuseum.

About The GRAMMY Museum

Paying tribute to music's rich cultural history, this one-of-a-kind, 21st-century Museum explores and celebrates the enduring legacies of all forms of music, the creative process, the art and technology of

the recording process, and the history of the premier recognition of excellence in recorded music — the GRAMMY Award. The GRAMMY Museum features 30,000 square feet of interactive and multimedia exhibits located within L.A. LIVE, the downtown Los Angeles sports, entertainment and residential district.

Through thought-provoking and dynamic public and educational programs and exhibits, guests can experience music from a never-before-seen insider perspective that only The GRAMMY Museum can deliver.