Fans of The Doors are going to love this news! Robert Kinsler 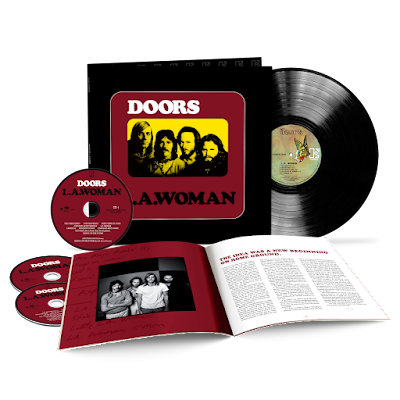 The Doors' 1971 L.A. Woman is truly one of the Los Angeles-spawned quartet's great albums. The special deluxe edition will include more than two hours of previously unreleased session outtakes from the period!

You can pre-order the special release via Rhino Records for $79.98 HERE.

Read the official media release from the band's record label below:

For this new collection, the original album has been expanded with more than two hours of unreleased recordings taken from the sessions for L.A. Woman, allowing the listener to experience the progression of each song as it developed in the studio. An early demo for “Hyacinth House” recorded at Robby Krieger’s home studio in 1969 is also included.

The outtakes feature Jim Morrison, John Densmore, Robby Krieger, and Ray Manzarek working in the studio with two additional musicians. The first was rhythm guitarist Marc Benno, who worked with Leon Russell in The Asylum Choir. The other was bassist Jerry Scheff, who was a member of Elvis Presley’s TCB band.

Among the outtakes of album tracks, you can also hear the band joyously ripping through the kinds of classic blues songs that Morrison once described as “original blues.” There are great takes of Junior Parker’s “Mystery Train,” John Lee Hooker’s “Crawling King Snake,” Big Joe Williams’ “Baby Please Don’t Go,” and “Get Out Of My Life Woman,” Lee Dorsey’s funky 1966 classic, written by his producer Allen Toussaint.

In the collection’s extensive liner notes, veteran rock journalist David Fricke explores the whirlwind making of the album, which would be the last with Morrison, who died in Paris a few months after its release. “Morrison may never have come back to The Doors,” he writes. “But with his death, L.A. Woman became rebirth, achievement, and finale, all at once. It’s the blues too – original blues, as Morrison promised. Fifty years later, there is still nothing like it.”

And the track listing for the 3-CD/1-LP set:

Posted by Robert Kinsler at 3:55 PM