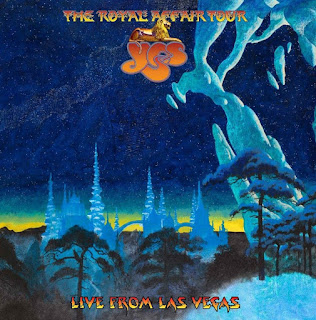 Following the outstanding success of their 2019 American tour, YES will release a new live album, THE ROYAL AFFAIR TOUR, LIVE FROM LAS VEGAS, through BMG Records. The release date of the album is October 30, but it will be available exclusively through the YES Store starting October 2. Formats are: CD digi sleeve with a 12-page booklet; 2LP gatefold with 12" booklet; and digital.
All YES concert tours are special events for their legions of fans, and "The Royal Affair Tour" was no exception, conceived as a wonderful celebration of the best of British progressive music. Guests on the tour were Asia (with YES keyboardist Geoff Downes and a special appearance by Steve Howe), John Lodge of The Moody Blues and Carl Palmer's ELP Legacy featuring Arthur Brown.
Of THE ROYAL AFFAIR TOUR album, Alan White says: "The Royal Affair tour album, being released in October, is a welcome new chapter in the wide expanse of YES live recordings. I hope you enjoy it."
Guitarist Steve Howe adds: "Having the opportunity to bring together the band members in the development of a well-refined set of songs that captures the band's true potential is simply an honor for me."
The show features many classic tracks across the period 1970-1980. The set opened with "No Opportunity Necessary, No Experience Needed," the Richie Havens cover from YES' second album Time And A Word (1970). "Tempus Fugit" was taken from Drama (1980), Geoff Downes' first as a member of YES, while "Going For The One," "I've Seen All Good People" and "Siberian Khatru" are from some of YES' iconic mid-70s albums. The set included a rare live performance of YES' cover of Paul Simon's "America"and John Lodge shared vocals on YES' cover of John Lennon's "Imagine." Soon-to-be YES drummer Alan White played on the original studio recording.
"The Royal Affair Tour" live set and album, recorded at the Hard Rock Hotel, Las Vegas, in July 2019, reaches a climax with two of the best-loved YES tracks, "Roundabout" and "Starship Trooper," always a high note on which to close the set.
YES are Steve Howe (guitar) who joined in 1970; Alan White, drums since 1972; Geoff Downes (keyboards) who first joined in 1980; vocalist since 2011 Jon Davison; and Billy Sherwood, who played guitar/keyboards in the 1990s and was the late Chris Squire's choice to take over bass/vocals in 2015, also played with Asia on this tour. Jay Schellen played additional drums.
"The Royal Affair Tour" also featured an exhibition of original art by Roger Deanwhose artwork is synonymous having designed the iconic YES logo and the band's best-loved album covers. Roger Dean recently painted THE ROYAL AFFAIR TOUR album artwork live on Facebook while also fielding questions from fans.
The 26-date "The Royal Affair Tour"and YES' performances were critically acclaimed:
"Yes proved again that they are, after all these years, still the kings of progressive rock."--Charlie Steffens, Vintage Rock, 8/5/19
"It was a unique night of rock music history that has endured for half a century."--L. Paul Mann, Grateful Web, 8/6/19
As always, YES put on a magical show and took the crowd on a journey through their hits."--Alex Kluft, Music Connection, 8/5/19
The band sounded great and had brilliant visuals to accompany the songs. Sherwood's bass playing is perfectly suited to capture the essence of the late Chris Squire while Geoff Downes and Steve Howe are still at the top of their games. Vocalist Jon Davison... looks extremely comfortable on stage, hitting each note with ease."--Roie Avin, The Prog Report, 7/15/19
The Royal Affair Tour - Live in Las Vegas track listing:
1. No Opportunity Necessary, No Experience Needed
2. Tempus Fugit
3. Going For The One
4. I've Seen All Good People
5. Siberian Khatru
6. Onward
7. America
8. Imagine
9. Roundabout
10. Starship Trooper
Recorded live at the Las Vegas Hard Rock Hotel, Friday, July 26,2019, THE ROYAL AFFAIR TOUR, LIVE FROM LAS VEGAS was mixed by Billy Sherwood and is released by BMG Records. Customers who order via the YES Store will receive their albums on October 2 with the album on general release starting October 30.
About Yes
For half a century YES have been one of the most innovative, influential and best-loved bands in rock music history and consistently at the fore-front of the progressive rock movement. Formed in 1968 by Jon Anderson and the late, and much-missed, Chris Squire, their 1970s albums The Yes Album, Fragile, Close To The Edge, the triple live album set Yessongs, Tales From Topographic Oceans,Relayer and Going For The One were ground-breaking in musical style and content. Their music also became synonymous with artist Roger Dean whose distinctive YES logo design and artwork adorned the lavish gatefold presentation sleeves of many YES albums.
With sales of over 50 million records, the Grammy-award winning YES were inducted into The Rock And Roll Hall Of Fame in 2017, where they performed Roundabout from the album Fragile and the FM radio-friendly Owner Of A Lonely Heart from the 1985 album 90125.
www.yesworld.com
www.facebook.com/yestheband
www.twitter.com/yesofficial
www.youtube.com/user/yesofficial
www.instagram.com/yesofficial
soundcloud.com/yesofficial
Posted by Robert Kinsler at 5:12 PM