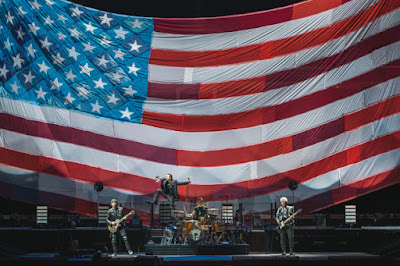 (September 17 - New York, NY) YouTube, Island Records, Interscope, UMe, and UMC today announce the relaunch of U2’s Official YouTube Channel with weekly releases of the band’s most iconic music videos and never before seen content on YouTube, all remastered at the highest possible standard. Over the course of the next year and beyond, the band’s music video catalog will be remastered in HD and launched exclusively on YouTube in that format.

The first phase of the relaunch will celebrate the upcoming 20th anniversary of the band’s tenth studio album, the GRAMMY Award-winning global smash hit, All That You Can't Leave Behind; leading with the re-release of one of the album’s most seminal tracks, “Stuck In A Moment You Can’t Get Out Of” remastered in 4K as a premium music video (PMV) and Premiering tomorrow at 12 PM ET HERE. 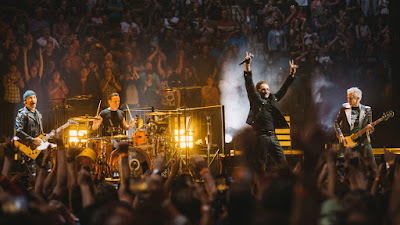 Throughout their career, U2 has been known for their unparalleled creative vision and artistry when bringing their music to life on screen. As new and remastered content is added over the next year, their YouTube channel will evolve as a hub to celebrate the band’s 40-year legacy and the evolution of their approach to video. Highlights will include previously unreleased live, behind the scenes, and remixed content, and some of their best-known music videos upgraded to HD for the first time ever, up to 4K quality whenever possible. The project will result in hundreds of new and upgraded videos being added to the channel, and a curated experience for fans to be able to explore the depth of the catalog.

The Edge said, “U2 has worked with some incredible filmmakers and directors over the years and it’s always been a lot of fun. Like a lot of people, I’m partial to a tumble down a YouTube rabbit hole…I hope you enjoy.”

David Joseph, Chairman & CEO, Universal Music UK, said, “From the stunning realization of their live shows to their timeless photography and album art, U2’s visual output has always been outstanding. Their passion for film shines through in all their videos and it’s been a huge pleasure to work with them to bring them together in the highest possible quality. This channel is going to serve as a brilliant showcase of the band’s ever-evolving creative vision."

Lyor Cohen, Global Head of Music at YouTube said, “U2 has created some of the most legendary video content of all time throughout their career. We are stoked to be working with them on enhancing their video catalog so that U2 fans around the world can experience their art in the best possible quality, for generations to come.”

Bruce Resnikoff, President & CEO, UMe added, “Throughout their career, U2 has continually set the bar for the highest possible standards, so it’s fitting the band’s iconic videos are receiving the same treatment. We’re thrilled to work with the band to celebrate the anniversary of one of their most popular albums and we can’t wait to share all of the amazing content that we have planned with fans on the band’s YouTube channel.”

In 2019, YouTube Music and Universal Music Group announced a joint initiative to remaster some of the most iconic music videos of all time with the goal of ensuring that current and future generations get to enjoy timeless classics as they’ve never before been experienced. Today, U2 joins this initiative with their vast catalog of music videos and creative content relaunching on a weekly basis at the highest available video and audio quality.

From the beginning, U2 were marked out by their drive and ambition, forming as a band “… before they could play”. Bono, The Edge, Larry Mullen, and Adam Clayton met at Mount Temple School and formed U2 in 1978 before signing to Island Records. Acknowledged as one of the best live acts in the world, U2 have released 14 studio albums and have sales in excess of 157 million. They have won numerous awards, including 22 GRAMMYs, an Oscar nomination, and the Amnesty International Ambassador of Conscience. In 2003 they won a Golden Globe Award for Best Original Song, ‘The Hands That Built America’,featured in Gangs of New York. 2014 saw U2 nominated for an Oscar for ‘Ordinary Love’ from the feature film Mandela: Long Walk To Freedom, as well as take home the Golden Globe Award for Best Original Song.

U2’s fourteenth studio album Songs Of Experience – the companion release to 2014’s Songs Of Innocence - was released in December 2017 and includes tracks ‘Get Out Of Your Own Way’ and ‘You’re The Best Thing About Me’. The new album debuted at #1 on the Billboard 200, setting U2 apart as the only band in history to have topped the chart in four successive decades. In 2018, the band hit the road with the eXPERIENCE + iNNOCENCE Tour, an arena production which saw U2 continue to push the creative boundaries of technology and engineering. And following 2017’s acclaimed stadium run with The Joshua Tree Tour - the record-breaking smash hit tour celebrating the band’s seminal 1987 album The Joshua Tree – 2019 saw The Joshua Tree Tour visit New Zealand, Australia, and Japan, as well as bring “the biggest band in the world” (The Guardian) to Singapore, Seoul, Manila, and Mumbai for the very first time.

And in June 2020, SiriusXM and U2 announced the launch of U2 X-Radio, a complete immersion into the work and influences of the band from the Northside of Dublin, all curated by U2.

Posted by Robert Kinsler at 9:13 AM