Next: Big Head Todd and the Monsters has a number of upcoming Southern California dates. The band performs in Ventura on Nov. 11; in Solana Beach on Nov. 12 and 13; and in Pioneertown on Nov 14

Opening with their enticing blues-flavored original "Josephina" (a track off their wonderful 2014 album Black Beehive), the quartet offered up the track with the perfect blend of raw power and nuanced virtuosity.

From there, BHTM performed a fantastic new original, "Thunderbird." A catchy country-tinged riff rocker bolstered by a fiery lead guitar solo courtesy of Mohr, the other three members of the outfit created a dynamic approach further amplifying the power of the cut.
With the exception of a brief hiccup during "King Kong" — where Mohr's guitar cut out — BHTM energetically delivered each song as if it was their greatest hit. An emotive laid back nugget, "Ellis Island" allowed the troupe to explore the corner of the sonic universe where blues and jazz meet; the foursome turned on a dime performing the '90s-styled reggae rocker "Please Don't Tell Her" with a breezy vibe adding to the magic.
Other standouts of the set included the Texas-blues mining "Dirty Juice" with Lawton tearing it up on slide guitar and Mohr's powerhouse vocals showcased, the groove-and-blues gem "New World Arisin'," "Vincent Of Jersey" with Mohr taking the beginning alone accompanied by his guitar, and a flat-out bewitching version of the band's 1993 hit "Bittersweet," the latter a sweeping and zestful version enhanced by the work of all four band members.
BHTM also celebrated several of their heroes during the set; early there was a ferocious Chicago blues take on Buddy Guy's "Sit and Cry (The Blues)"  — originally recorded back in 1958 — while later on they covered John Lee Hooker's timeless "Boom Boom" with equal abandon.
The encore was definitely worth the wait. The Boulder, Colorado band delivered a mighty version of "Circle," the rousing single from the band's major label debut Sister Sweetly. Park's emotive and convincing vocals were fully in sync with the song's refined beginnings and build to a huge classic rock-styled finale. 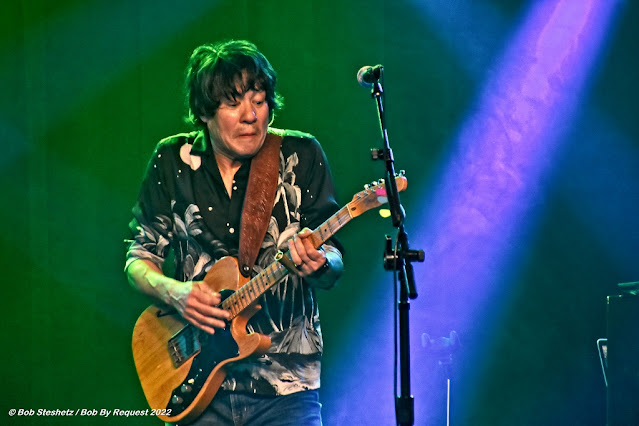 BHTM closed out the memorable set with a fun run through the Ramones' "I Want To Be Sedated."

Opening the night with a 45-minute set of Americana-meets-blues, Jim Dalton — accompanied by the aforementioned Jeremy Lawton — featured tracks from Dalton's full-length 2021 album In My Head.
Dalton, the lead guitarist of Roger Clyne & the Peacemakers, brought a loose and authentic approach to his performance. The countrified "Amigos" and satiric "Serial Killer" (Dalton wrote the latter song after reading a news report about a young woman who wanted to marry serial killer Charles Manson) were among the standouts. My favorite song of the pair's set was Dalton's absolutely luxurious ballad "In My Head."