Review and photography by Robert Kinsler

Arcade Fire brought their "WE" tour to the legendary Kia Forum in Inglewood, CA on Wednesday, Nov. 16 for the first of two headline performances at the Los Angeles County venue.

For long-time fans of the Canadian indie rock band fronted by the talented husband and wife duo of Win Butler and Régine Chassagne, the good news is that the group continues to inspire with soaring modern rock that draws its power through a fusion of alternative rock, Baroque pop, new wave, dance music and other styles.

Over the course of two hours, Arcade Fire covered a number of tracks from their wonderful 2022 studio album WE while revisiting a slew of past classics spanning from their 2004 debut Funeral to 2017's Everything Now. The enthusiastic crowd was fully in tune with the band, and thankfully thrilled with the band's riveting performance and the fantastic setlist.

Arcade Fire continues to find ways to fully connect with its audience. There were many times where members of the band would venture out into the crowd, or perform on a second stage positioned in the middle of the floor.

In fact, Arcade Fire performed their full encore on that second stage - including a moving version of Tom Petty's "Free Falling" before raising the roof with their own "Wake Up."

Age of Anxiety I

It's Never Over (Hey Orpheus)

My Body Is a Cage 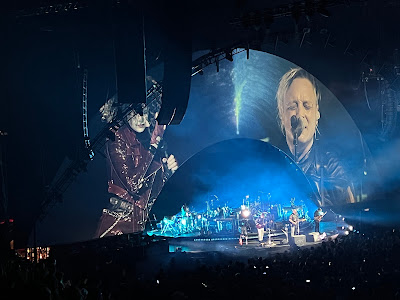 End of the Empire I-III

End of the Empire IV (Sagittarius A*)

Posted by Robert Kinsler at 8:56 PM