Watch the wonderful and delightfully colorful music video for Tom Petty and the Heartbreakers' version of J.J. Cale's enduring song "Call Me The Breeze"...Robert Kinsler 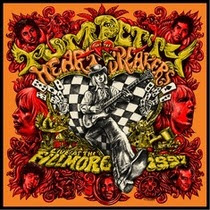 The infectious rendition of J.J. Cale’s classic “Call Me The Breeze,” performed by Tom Petty and the Heartbreakers during their legendary 20-show run at the Fillmore is out now, with an accompanying video directed and hand-illustrated by Emmy Award-winning Jeff Scher; watch HERE and listen HERE. The new track is taken from the highly-anticipated Live at the Fillmore (1997)—Tom Petty and the Heartbreakers’ first live record in over a decade—set for release November 25 on Warner Records. Pre-save/pre-order HERE.
The video features characterful animations of Tom Petty and The Heartbreakers performing live at the Fillmore, hand drawn by educator and filmmaker Scher. “‘Call Me The Breeze’ is an anthem to freedom,” says Scher, whose body of work includes music videos for Bob Dylan, Paul Simon and others as well as pieces in the permanent collections of the Museum of Modern Art, The Harvard Film Archive, The Centre Pompidou and the National Film Archive of Austria. “The most direct metaphor for me was driving and the joy of unrestricted motion which made me think of the way things blur when they fly past.  I was excited to try and recreate that motion blur with paint and pastel. I started with the first shot and just kept adding shots and cutting it together as I went. You might say it just evolved as it grew.  Making the video in this way felt like I’d incorporated the spirit of the song into the process of making the video.”
Tom Petty and the Heartbreakers were long-time fans of the late singer J. J. Cale. The band frequently played his songs in their sets, and Petty often played Cale songs on his acclaimed “Buried Treasure” show on Tom Petty Radio. “Call Me The Breeze” is one of two J. J. Cale covers on Live at the Fillmore, alongside “I’d Like To Love You Baby.” Other album highlights include Bob Dylan’s “Knockin’ On Heaven’s Door,” The Rolling Stones’ “Time is On My Side” and more from The Kinks, Everly Brothers, Bill Withers, The Byrds and Chuck Berry, along with extended versions of original tracks “Mary Jane’s Last Dance” and “It’s Good To Be King.”
“Call Me The Breeze” is the latest offering from Live At The Fillmore, the legendary 20-show run that Petty noted as “the highpoint of our time together as a group.” An intimate, stripped-down version of “I Won’t Back Down” and “Listen To Her Heart,” with an accompanying video directed by Peter Sluszka, are also out now.
Last month previously unreleased, never-before-seen footage unearthed from the Petty estate vaults was released as part of a short film about the band’s legendary 1997 residency at the historic San Francisco venue. The captivating 20 sold-out show run included some of the most joyful, inspirational and prolific experiences of the band’s career, during which they were nicknamed the “Fillmore House Band.” Watch/share Tom Petty & The Heartbreakers: The Fillmore House Band (Short Film) HERE.

Posted by Robert Kinsler at 7:48 AM