'Lennon, the Mobster & the Lawyer - The Untold Story' available now

For the Beatles fan in your life, light up their holiday with a revealing new memoir that tracks a largely unknown chapter in the life of JOHN LENNON... 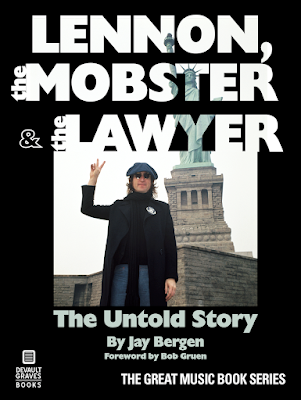 Author-attorney Jay Bergen draws from his own personal experience as John Lennon's lawyer to uncover the dramatic under-the-radar courtroom battle (1975-76) when John was sued by a notorious mobster/music mogul.

Bergen’s book, Lennon, the Mobster & the Lawyer - The Untold Story (Devault Graves Books; May 1, 2022; U.S. $28.95; Softcover) relates the true story where Mafia-connected owner of Roulette Records, Morris Levy, released Roots, a bootleg version of a rock ’n’ roll oldies album John had been producing. Capitol Records' quick release of John Lennon Rock ’n’ Roll, the official album, resulted in two Levy lawsuits against John—and John’s counterclaims against Levy. The attempted shakedown led to a high stakes battle in US District Court where Bergen, partner in a prestigious NYC law firm, represented Lennon over the rights to his own recording. Millions of dollars were on the line.

Using John’s own words pulled from the trial transcript, Bergen recounts detailed strategy sessions where the two mapped out John’s testimony, including:

Lennon, the Mobster & The Lawyer: The Untold Story

As seen in The Guardian; excerpted in Rolling Stone

and featured in MOJO***

Available on Amazon, B&N, and https://www.lennonthemobsterandthelawyer.com/

Posted by Robert Kinsler at 6:43 PM