Next: JD Simo and GA-20 are in the midst of an extended tour together extending through January 2022. The artists' next show is at the Soda Bar in San Diego on Nov. 14. Learn more HERE or HERE.

Two terrific trios were showcased at The Coach House in San Juan Capistrano on Thursday night. Headliner JD Simo and opener GA-20 are part of a growing field of acclaimed young artists mastering classic blues-rock sounds while bringing their own creative instincts into the mix. That fusion of past and present forces was certified in spades throughout the night.

Boston-spawned GA-20 kicked off the concert with a rousing 65-minute set of hard-hitting selections that recalled the power and fury of some of the blues genre's greats to emerge in the late 1950s and early '60s — Buddy Guy, Earl Hooker and Junior Wells immediately come to mind. Singer-guitarist Pat Faherty, guitarist Matthew Stubbs and drummer Tim Carman were on fire from the moment they took the stage, conjuring up an intoxicating sound that is rooted in the past but firmly connects in the here and now courtesy of a signature edge.

Faherty and Stubbs are both stylish guitar players able to deliver enticing lead solos,  while Carman is a solid drummer able to keep the one man rhythm section moving with grace and power. In addition to his top-tier vocals, Faherty often using a slide to enhance the sonic fireworks (he did that in the speedy opener "No No").

There were plenty of other wonderful moments early in the trio's set, including the 1950s rock and roll mining "Just Because," pretty Texas-flavored "Dry Run" and fiery "Give Me Back My Wig" (the latter off the threesome's latest album Try It...You Might Like It: GA-20 Does Hound Dog Taylor).
Late set standouts included the slow blues nugget "Happy Today," raucous "Hold It One Time," aptly-titled "Let's Get Funky" and catchy "Double Gotten' My Love."

Backed by Adam Abrashoff (drums) and Michael Zimmerman (bass), JD Simo impressed throughout his 80-minute outing. Simo arrived in Orange County on the heels of the release of his new album Mind Control (released Nov. 5 via Crows Feet Records), an ambitious project developed during the COVID-19 pandemic when the three musicians would gather one day a week to record new tracks.
Compelling material from Mind Control was showcased along with earlier material from his winning discography during a 75-minute performance. "Go Away Satan" was an early highlight blending trance blues and heavy blues rock where Simo's yearning vocals were delivered against a particularly hypnotic marching drum beat. Simo's guitar work ranged from quiet and nuanced to Hendrix-mining dramatics.
Following was "One Of Those Days" off his 2020 album JD Simo (which the artist noted was a tribute to the late Curtis Mayfield); the wistful cut found Simo using his high-reaching falsetto to deliver some beautiful soul-filled vocals while his gentle guitar work matched the song's artistic tone.
Later in the set the trio tackled "That's When You Know You're Down," where Simo's vocals reached low and the two members of the rhythm section stretched their reach on a Captain Beefheart-inspired sortie.
Simo's set allowed him to explore the far-flung reaches of his style, including Chicago blues, soul, blues rock and more. "Let Go" - another cut from Mind Control - found Simo tearing it up with his slide guitar work and potent lead vocals.
Simo ended the night with a true one-two punch, the '60s blue rock "Know It All" featuring the guitar great impressing with some of his most breathtaking guitar work of the night. "Higher Plane" fused all sorts of musical styles across its 20-minute run including a heavy Jimi Hendrix-like opening section, astonishing slide guitar work, a drum solo, jazzy section and plethora of dynamics to please the crowd. 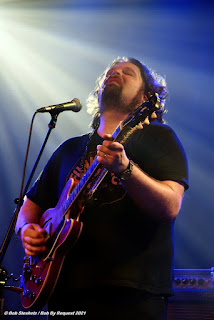