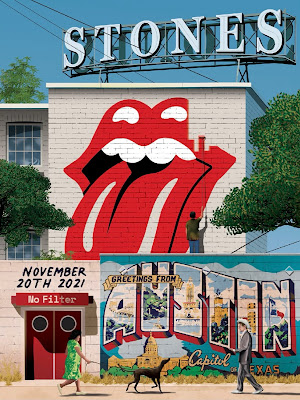 Who: The Rolling Stones, The Ghost Hounds

Where: Circuit of the Americas in Austin, Texas

Next: The Rolling Stones have one remaining performance, a special show at Hard Rock Live in Hollywood, Florida on Tuesday, Nov. 23

Watching The Rolling Stones on the final night of their No Filter tour at Circuit of the Americas in Austin on Saturday night, I wondered if I was watching the legendary rockers for the last time.

Nearly 60 years into their singularly-spectacular run as one of the greatest and most enduring rock bands of all time, the English troupe performed without beloved drummer Charlie Watts who passed away in August.
It was fitting the Stones' set was introduced with an affecting video montage featuring images of Watts while the sound of his signature drumming kept time. After that memorable opening, singer Mick Jagger, guitarists Keith Richards and Ronnie Wood and a top-tier touring band took the stage just after 9 p.m. for "Street Fighting Man," the first cut in an 18-song set that spanned material from the early '60s to their most recent single.

After tearing through a loose rollicking take of "It's Only Rock 'n' Roll (But I Like It)" and inspired "Nervous Breakdown," Jagger — who remains an energetic marvel at age 78 — revisited the legacy of Watts, who passed away at the age of 80 on Aug. 24. "In 1962, we met this great drummer Charlie Watts," Jagger said with the massive crowd breaking into cheers and applause. "We'd like to dedicate this show to Charlie Watts."

The troupe then performed "Tumbling Dice," a track originally recorded in 1972 that blends blues and a boogie-woogie rhythm that is widely recognized as one of Watts' masterful moments behind the drum kit. On this night the song's instantly infectious groove was bolstered by the interplay between the Stones' two guitar greats; Wood showed off some super cool fretwork where he artfully bent the strings on his electric guitar.

Speedy and conventional guitar solos have never been The Rolling Stones' calling card. Wood's distinctive work on "Tumbling Dice" was euphoric evidence that the Rock and Roll Hall of Famers have always had a unique approach to crafting many of rock music's most beloved classics. Kudos to drummer Steve Jordan who did a wonderful job filling in for the departed Watts; Jordan is a long-time friend of the Stones and was a member of Richards' late 1980s/early '90s project X-pensive Winos.

Throughout the No Filter tour the band has let fans vote to hear a favorite song from their expansive songbook. In Austin, Jagger announced that "Let It Bleed" was this night's choice cut. Jagger's warm acoustic guitar work and Wood's stylish slide playing turned the title track from the band's December 1969 release into a bluesy delight."Want to sing a little bit Austin?" Jagger asked before the Stones slid into "You Can't Always Get What You Want." A wistful opening of the song picked up power with the audience sing-along; the band's arrangement included a speedy and explosive gospel-tinged finale.

One of this writer's favorite selections was "Living in a Ghost Town," released as a single in 2020. The tune's cool reggae vibe and COVID-19 minded lyrics continue to resonate in 2021. The song worked exceptionally well live (Jagger displayed his top tier talents playing blues harp too) and the track stands up well with the band's '60s, '70s and '80s classics played at the concert.

Indeed, the winning mix of hits (such as the stadium ready "Start Me Up" and dance-fueled "Miss You"), new material ("Living in a Ghost Town") and under the radar nuggets (Richards taking lead vocals on the rocker "Connection" and Delta blues mining "You Got The Silver") all worked magically. "Midnight Rambler" was a 13-minute blues sortie; "Paint It Black" brought chills on an already-cool November night with Richards' expressive solo guitar intro.

The Stones seemed to gain power with almost each track leading up to a glorious flurry of favorites that capped the night. The fiery "Sympathy for the Devil" and roaring "Jumpin' Jack Flash" closed out the regular set with festive abandon.

The encore featured a thrilling take on "Gimme Shelter" with Sasha Allen sharing lead and dueling vocals with Jagger (along with some killer fret work from both Wood and Richards. Rounding out the noteworthy ensemble on stage was long-time bassist Daryl Jones (who replaced original band bassist Bill Wyman in 1994), keyboardists Chuck Leavell and Matt Clifford, saxophonists Karl Denson and Tim Ries, and backing vocalist Bernard Fowler.  The two-hour set ended with an extended version of "(I Can't Get No) Satisfaction," the entire ensemble locked in while a firestorm of pyrotechnics lit the night.

Opening for The Rolling Stones was the rising Ghost Hounds, a six-man collective out of Pittsburgh, PA. Putting on an entertaining set, the group's sound recalled an original cross between Vintage Trouble and Hootie & the Blowfish. The live performance was enhanced by the additional of three backing singers, all the proceedings bringing life to originals like the breezy "Killing Stone," country track "Someone Just For Me," Chuck Berry-styled "Bad News" and rocking "A Little Calamity."

The Rolling Stones' setlist as Circuit of the Americas on Nov. 20, 2021

6. You Can't Always Get What You Want

7. Living in a Ghost Town

11. You Got The Silver (featuring Keith Richards on lead vocals)

15. Sympathy for the Devil

Posted by Robert Kinsler at 7:08 AM