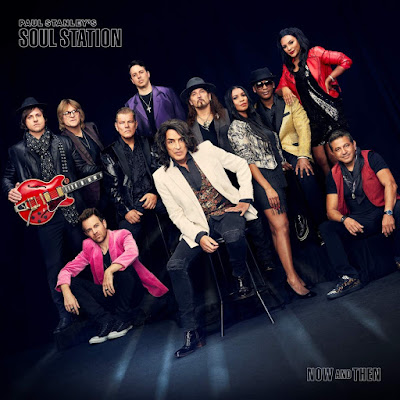 Going into the weekend, I wanted to provide an update on Now and Then, the forthcoming debut release from Paul Stanley's Soul Station.

As Stanley and his collective get set to release their highly-anticipated new album Now and Then on March 19, 2021, it got me recalling how truly strong the ensemble was when I saw them appear at the Coach House in San Juan Capistrano five years ago. And yes, for those who don't know, Soul Station's Stanley is also the frontman ("the Starchild") for legendary Rock and Roll Hall of Fame outfit KISS.

When I reviewed Stanley and company in February 2016, I was absolutely floored and had no idea that Stanley could sing soul music with such power and authenticity. Read my Orange County Register review of that memorable concert re-posted on Rock 'n' Roll Truth HERE.

Hear the troupe's versions of "Could It Be I'm Falling In Love" and "O-O-H Child" and other stellar soul cuts HERE. The forthcoming disc will feature five original selections along with nine covers of classic R&B and soul tracks. Here is the complete track listing for the upcoming album:

In a statement, Stanley says of Now and Then: "Between us doing some great Soul Station shows and starting the album, I started to think that neither the band or the music we love should depend only on the past, so I started writing with the goal of seamlessly taking songs into the present. From what a lot of people I respect have told me, that mission was accomplished.”

You can pre-order the album HERE.

Posted by Robert Kinsler at 9:47 AM

Definitely looking forward to checking this out

I am too! Ever since I caught Paul Stanley's Soul Station in 2016 I have hoped they would issue a studio album! Can't wait to hear this!