The Pretenders 'You Can't Hurt a Fool' new single out now

Cool news for a Tuesday...

The Pretenders return with 'You Can't Hurt a Fool' 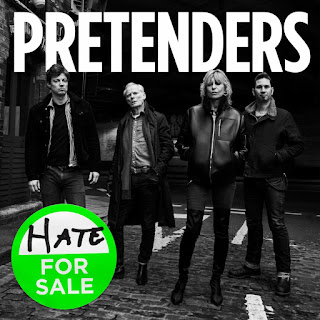 LISTEN TO “YOU CAN’T HURT A FOOL”

“I suppose our biggest influence apart from crazy, hard-core rock and roll has been R&B,” says Chrissie Hynde of the soulful “You Can’t Hurt A Fool.” “James and I really grappled with this one to get in all the subtleties and nuance of an R&B classic, albeit with modern, autobiographical lyrics…The fool is me!”

HATE FOR SALE has already been heralded with a pair of equally extraordinary new tracks, “The Buzz” and “Hate For Sale,” both of which are available now for streaming and download. “The Buzz” was met by immediate acclaim by Rolling Stone  and Stereogum, who enthused, “‘The Buzz’ is the kind of world-weary shimmer that the Pretenders have always been great at…Hynde’s craggy, seen-it-all vocals haven’t really changed in the past four decades, and neither has her sharp, intuitive songcraft.”

LISTEN TO “THE BUZZ”

“Hate For Sale” followed and was greeted by equivalent applause, with SPIN writing, “Dueling guitars and high energy beat, the song will quickly take you back to the heydays of the punk era – a time that the band really loves.” The new LP’s title track “finds The Pretenders – Chrissie Hynde in particular – channeling their inner riotous punk rock selves,” raved Consequence of Sound. “The lead singer and guitarist’s vocals heard here are flung out with an attitude that alternates between haphazard shrug and in-your-face statement.”

LISTEN TO “HATE FOR SALE”

TRACKLISTING:
Hate For Sale
The Buzz
Lightning Man
Turf Accountant Daddy
You Can’t Hurt a Fool
I Didn’t Know When To Stop
Maybe Love Is In NYC
Junkie Walk
Didn’t Want To Be This Lonely
Crying in Public