Sights and Sounds: Get ready for the arrival of the Lickerish Quartet on May 15, 2020

What promises to be one of the best albums of the year (based upon the fantastic track "Lighthouse Spaceship," here are details about the debut offering from The Lickerish Quartet. 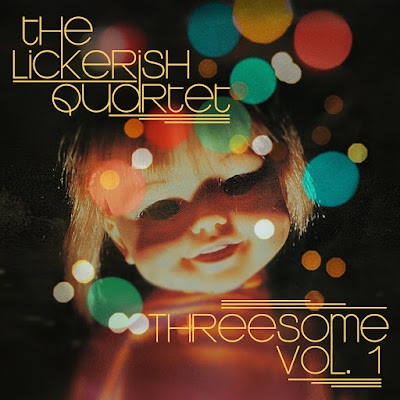 Absence makes the collaborative heart grow fonder. Just ask the three masterful musicians who comprise the modern-day supergroup known as The Lickerish Quartet. Fans and eagle-eared listeners alike will instantly recognize the shared pedigree that Roger Joseph Manning Jr. (Beck, Air, Cheap Trick, Imperial Drag), Tim Smith (Noel Gallagher’s High Flying Birds, The Finn Brothers, Sheryl Crow, Umajets), and Eric Dover (Imperial Drag, Slash’s Snakepit, Alice Cooper, Sextus) all have together by way of the melodiously fruitful time they spent in the ’90s alt-rock cult-favorite collective known as Jellyfish. After many years in the interim of supporting the visions of other artists, they were eventually able to reconvene on their own in early 2017, spending whatever time they could spare in the ensuing three years to create something they could truly call their own. 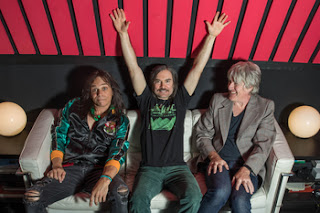 Watch the lyric video for "Lighthouse Spaceship" here.
“While touring with Jellyfish, it was pretty clear to me that both Eric and Tim had plenty to say as writers in their own right,” Manning reports. “All these years later, it was like picking up where we left off in many ways. Ultimately, the songs go on their own journeys, but I also think our collective vocal sound puts a stamp on all of them, no matter who’s singing lead. That’s what really joins it all together.” Smith very much agrees with that assessment. “It’s a good feeling knowing we found a way to blend together again as the three of us, and then find new ways to explore our ideas,” he marvels. “I think all the songs we did make something magical out of the mundane aspects of daily life.”
Threesome Vol. 1 opens with “Fadoodle,” a Dover-driven look at how to rekindle the fires of a long-entrenched relationship. “Well, I’m always looking for new ways to say dirty things,” Dover observes with a laugh. “I found a big list of naughty words from back in the day for what people used to denote fornication. It’s fascinating, because this has the distinction of being a pop song that has the world’s oldest slang yet is released in the 21st Century.” Adds Manning, “This one has that eighth-note driving thing that was a big part of the glitter sound of the early punk wave, so it’s got that kind of energy right out of the gate. Thankfully, once we had Eric’s lyric in place, it was just a free-for-all in having fun with the vocal interplay.”
Next comes Manning’s “Bluebird’s Blues,” which features Mellotron and a 3D feel born from a musical bed he initially came up with back in 1988. “That one was very much a guitar song,” explains Manning, “and after showing my idea on piano to Tim and Eric, they were able to run with it immediately to give it that folkie guitar feel that it needed, and was calling out for. All of our contributions, including those of our drummer Jeremy Stacey, show the intricacies and clever ways of how we were able to move through that folk chord progression.” Interjects Dover, “It was an instantaneous thing we did, from Note 1. It set the mood, and it’s a beautiful moment. Being able to do that is one of the things we have going on together musically.”
The third track is “There Is a Magic Number,” a Smith-penned rumination on how to deal with the sad circumstance of two people who have drifted apart after putting the blame for their dissolution on a number that signified the last straw — all buttressed by a signature trippy guitar line courtesy of Dover. “That just had to do with my favorite ’60s psychedelic garage records along with a little bit of surf music thrown in because I like some of those clean, twangy things,” Dover confirms. Adds Smith, “You never really hear any sad surfer music, do you? I just thought this was an interesting play on the idea of what could cause a relationship to end, without them really knowing why but blaming the circumstances on the final number you reach in your head after experiencing X amount of things, X amount of times.”

The EP concludes with the quite heady 6½-minute trip on a “Lighthouse Spaceship.” Manning reflects, “It was just a big experiment we were eager to conduct, and Eric’s genesis for the idea of the lyric really helped pull it all together. Once we had that very vivid imagery in hand, we could start expanding upon it in the arrangement to help paint the visual extension of his lyrics, which are wonderfully psychedelic.”
While The Lickerish Quartet don’t anticipate playing any live dates together anytime soon, they can confirm there are two more four-song EPs waiting in the wings, if demand warrants their release. Acknowledges Manning, “Realizing original ideas of my own is the most gratifying thing about making music, and the natural progression of what the three of us are doing together is you want to share it with people.” Declares Dover, “I’m always going to have time for doing music with these two people, even if we don’t live near each other. And if we only do two songs instead of 12, then we only do two. I’m cool with that.” Concludes Smith, “There’s a level of trust between collaborators who all share the same general goal. Only that can keep it interesting and push it even further to where it can go. At the end of the day, as long as all three of us are excited and inspired with what we come up with, we’ll figure out a way to do more of it.” Hear, hear. Given the inherent, aurally seductive nature of Threesome Vol. 1, we have a feeling many fans both old and new will want much more of The Lickerish Quartet music in their lives — and then some.
Posted by Robert Kinsler at 11:28 PM