Fountains of Wayne to honor Adam Schlesinger, set to perform at JERSEY 4 JERSEY on April 22nd

This just landed in my inbox and wanted to share. Make sure to tune in this Wednesday at 7 p.m. ET (4 p.m. PT)...Robert Kinsler 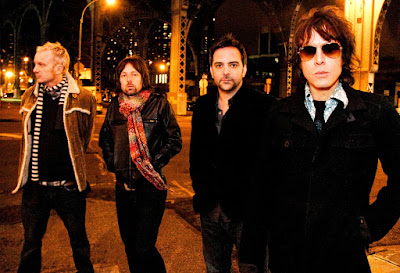 April 20, 2020: On Wednesday, April 22 at 7pm ET, as part of the New Jersey Pandemic Relief Fund’s JERSEY 4 JERSEY benefit show raising funds to fight the impact of COVID-19, the remaining members of Fountains of Wayne will reunite for their first live performance in 7 years to pay tribute to songwriter, bassist, and vocalist Adam Schlesinger who passed away earlier this month. The band’s Chris Collingwood, Jody Porter and Brian Young will be joined by acclaimed singer-songwriter and New Jerseyan Sharon Van Etten to fill in on bass and backing vocals.
“Brian, Jody and I are honored to be part of the Jersey 4 Jersey benefit, and grateful that Sharon was able to perform with us,” Collingwood says. “Adam would have been proud that Fountains were helping to raise money for fellow New Jerseyans.”
“As a New Jersey native, it means so much to me to participate in the NJPRF charitable event that gives back to this community,” says Van Etten. “Adam was an incredible songwriter and I am truly humbled to join Fountains of Wayne in his honor."
“One of the great unheralded songwriters of our time” (VOX), Schlesinger was a founding member of the bands Fountains of Wayne, Ivy, and rock supergroup Tinted Windows, as well as a regular writer and producer for Brooklyn synth-pop duo Fever High. Despite modest record sales, Fountains of Wayne, which Schlesinger co-founded with singer, songwriter, and guitarist Chris Collingwood in 1995, was loved by critics and became a cult favorite with songs such as “Radiation Vibe,” “Utopia Parkway” and “Red Dragon Tattoo” before their 2003 hit “Stacy’s Mom” brought them into the mainstream.
From the beginning of his career, Schlesinger also found success writing songs for film, theater and television, most notably penning the theme song for the Tom Hanks directed film That Thing You Do!, and writing and producing songs for the TV comedy show Crazy Ex-Girlfriend. Over his uniquely distinguished career, Schlesinger won three Emmy Awards, a GRAMMY Award, the ASCAP Pop Music Award, and was nominated for Academy, Tony, and Golden Globe Awards. He had most recently been collaborating with Sarah Silverman for the stage adaptation of her memoir, “The Bedwetter,” which was scheduled to begin performances this month.
News of Schlesinger’s passing shook all corners of the entertainment world. “With a career unlike any other indie songwriters” (Rolling Stone), he was paid tribute to by Tom Hanks, Stephen Colbert, Rachel Bloom, Conan O’Brien, Jack Antonoff, and countless others who were impacted by the songwriter’s undeniable talent.
Collingwood and Van Etten, along with Fountains of Wayne drummer Brian Young and guitarist Jody Porter, will come together for The New Jersey Pandemic Relief Fund’s (NJPRF) JERSEY 4 JERSEY benefit, a one-night broadcast fundraiser to fight the medical, social and economic impact of COVID-19 on New Jersey’s most vulnerable communities. It will be broadcast at 7 PM ET on Wednesday, April 22, on Apple Music and AppleTV apps, worldwide. This special evening will feature New Jersey’s biggest champions and celebrities participating from their homes, including Saquon Barkley, Tony Bennett, Jon Bon Jovi, Danny DeVito, Whoopi Goldberg, Halsey, Chelsea Handler, Charlie Puth, Kelly Ripa, Chris Rock, Bruce Springsteen, Jon Stewart, SZA and more.
About the New Jersey Pandemic Relief Fund (NJPRF)
The New Jersey Pandemic Relief Fund (NJPRF) was launched March 24, 2020 to marshal resources to meet critical needs and fight the economic and social impact of COVID-19 within New Jersey.
NJPRF will provide grants to existing organizations with a demonstrated track record of caring for vulnerable communities. One hundred percent of every dollar received online by NJPRF will go to organizations that provide essential services to those in need and to assist those on the front lines of the COVID-19 pandemic.
NJPRF is proud to be hosted by the Community Foundation of New Jersey, which has been serving the needs of New Jersey non-profits and philanthropists for more than 40 years.
For additional information please visit: https://njprf.org/
Posted by Robert Kinsler at 2:39 PM