Wow, this is great news for fans of one of rock's greatest-ever vocalists...


Los Angeles, CA (April 19, 2018) … Paul Rodgers is returning to where it all began, by celebrating the 50th anniversary of Free. Fans fortunate enough to get a ticket to the sold-out performance at London's Royal Albert Hall (in May 2017) witnessed a truly unique event. On June 22, 2018, fans worldwide will be able to experience the magic, captured for a live recording, set to be released by Quarto Valley Records. Paul Rodgers – Free Spirit – Celebrating The Music of Free will be available on CD/DVD, Vinyl, Blu-ray and across all digital platforms. 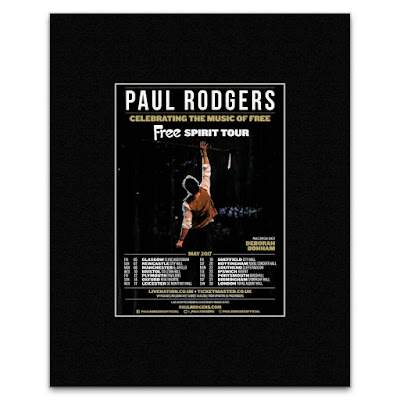 The 16-song collection recorded from the show includes inspired performances of rock hits like “All Right Now,” “Wishing Well,” “Fire and Water,” and many deep tracks—some of which were never performed live by the original band, such as “Love You So” and “Catch a Train.” Along with this collection, those who purchase the Blu-ray and vinyl can expect exclusive footage and bonus tracks from opening acts Jasmine Rodgers, artist and multi-instrumentalist daughter of Paul, and Deborah Bonham, rock and blues vocalist sister of Led Zeppelin drummer John Bonham.

"When I went down to London in '67 I had three things in mind,” says Rodgers. “To survive, to find peace of mind, and to make music doing it. When Free came together there was a creative magic around us, something unique and different. I felt again the strength of that magic on the 2017 Free Spirit Tour. Playing the songs we wrote, I felt the love and recognition the fans have for this music. The band, the fans, and I inspired each other to create and capture these moments in time."

Beginning his iconic music career as a founding member, main songwriter, and frontman for Free, Rodgers is regarded as one of the greatest vocalists in rock history by contemporaries and fans. According to Eric Clapton, “Paul Rodgers is the real deal,” while Robert Plant says, “Paul Rodgers [is] the voice of all British voices.” Rodgers has sold over 125 million records worldwide with his legendary bands Free, Bad Company, The Firm and as a Grammy-nominated solo artist.

“We are very excited and extremely honored to be part of this historic event,” says Bruce Quarto, president of Quarto Valley Records. “This performance, perfectly captured in a variety of formats, is truly a rare event that any Paul Rodgers fan will definitely want to watch and listen to, over and over again.”

Rodgers will be performing with his solo band and a few select dates with Bad Company in the upcoming months. Starting July 18, Jeff Beck and Paul Rodgers will embark on the co-headlining Stars Align Tour, with Ann Wilson of Heart serving as the opening act, along with Deborah Bonham.

About Paul Rodgers
Growing up in the sprawling industrial North Yorkshire city of Middlesbrough, Paul Rodgers formed his first band at the ripe old age of 14. Shortly after at 18, he formed Free along with late guitarist Paul Kossoff. They gained international success with the Rodgers / Fraser smash single “All Right Now.” For almost five decades, Rodgers has been recording and performing. He has written, recorded, produced and released 30 albums and has sold 125 million records. He has received numerous awards: the prestigious Ivor Novello Award for Outstanding Contribution to British Music (other recipients include John Lennon, Paul McCartney, and Elton John), an honorary Doctorate of Letters from Teesside University, BMI’s 5 Million US Radio Plays Awarded for “All Right Now”, the Chairman’s Award from the US Music Business Association, and more. He has recorded and/or performed with Jimmy Page, Jeff Beck, Brian May, Sam Moore, Joe Walsh, Ann Wilson, Slash, Nils Lofgren, Charlie Watts, Bryan Adams, Buddy Guy, and others. In his remarkable career, Rodgers has fronted the bands Free, Bad Company and The Firm, and continues to have a celebrated, award-winning solo career.

About Quarto Valley Records
California-based Quarto Valley Records celebrated their fifth anniversary in 2017. Founded by tech entrepreneur Bruce Quarto, the label is dedicated to supporting and expanding the genres of rock, jazz and blues music. Passionate about supporting artists and their creative process, Quarto’s goal is to reinvent the traditional record company with a new business model that is fair and respectful to artists.
Posted by Robert Kinsler at 1:24 PM