'Beside Bowie: The Mick Ronson Story, The Soundtrack' available June 8, 2018

Wanted to help get the word out about this important soundtrack set for release in early June... 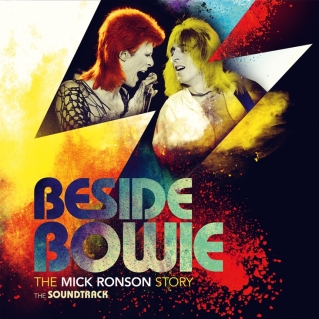 
“As a rock duo, I thought we were every bit as good as Mick [Jagger] and Keith [Richards],
or Axl [Rose] and Slash. Ziggy [Stardust] and Mick [Ronson] were the
personification of that rock & roll dualism.” – David Bowie

“Mick Ronson was a guitarist with a sound like no other. Between 1970 and 1974, he was the musical genius behind David Bowie's greatest run of albums, The Man Who Sold the World, Hunky Dory, Ziggy Stardust, Aladdin Sane, and Pin Ups. Not only did he play guitar, he wrote the arrangements, baroque soundscapes that perfectly complemented Bowie's vision” – The Guardian

Los Angeles – April 13, 2018 – UMe is pleased to announce the release of Beside Bowie: The Mick Ronson Story, The Soundtrack on June 8. The album comes on the heels of the film’s streaming debuts on Hulu and Amazon Prime following last year’s successful theatrical run and the DVD/Blu-ray releases.

The soundtrack is the first official career retrospective compilation for the guitar virtuoso, Mick Ronson, known affectionately as “Ronno.” As well as highlights from Ronson’s solo records, the compilation includes material from his key collaborations with David Bowie, Elton John, Ian Hunter, Michael Chapman and Queen. The album also includes a previously unreleased cover version of “This Is For You” by Def Leppard’s Joe Elliott and a piano tribute to Ronson from Bowie’s piano-man and band alumni Mike Garson (David Bowie, Nine Inch Nails, Smashing Pumpkins). The soundtrack includes extensive essay & liner notes and will be available on CD and digital and heavy-weight 180-gram black vinyl. There will also be a limited edition red vinyl version available exclusively at uDiscover. Pre-order Beside Bowie: The Mick Ronson Story, The Soundtrack now on CD/digital: https://Besidebowie.lnk.to/CD-Digital or vinyl: https://Besidebowie.lnk.to/Vinyl
Limited edition red vinyl: https://UMe.lnk.to/BesideBowieRedVinyl

For the career-spanning documentary, producer/director Jon Brewer (“BB King: The Life of Riley,” “Nat King Cole: Afraid of the Dark,” “Jimi Hendrix: Guitar Hero,” “The Most Dangerous Band in The World”) gained the unprecedented access and permission for use of materials relating to the life of rock hero Mick Ronson, who was largely commercially overlooked despite his direct contribution and pivotal involvement in countless iconic compositions of David Bowie and The Spiders from Mars.

Despite his production and guitar work with Lou Reed, Morrissey, Ian Hunter and Mott The Hoople, Bob Dylan, John Mellencamp and many others, it is Ronson’s dynamic support, contribution, and co-creation of the expansive and multi-faceted career of David Bowie and in fact that era of music, that the film and this soundtrack exposes. Featuring exclusive narration by David Bowie and exclusive contributions by Rick Wakeman, Joe Elliott, Roger Taylor, Ian Hunter, Angie Bowieand many more, “Beside Bowie: The Mick Ronson Story” is a tribute to an uncomplicated man who achieved the pinnacle of success in the music industry as well as the rarefied respect from his contemporaries for his production and guitar skills.

His humble beginnings (in the northern English city of Hull) underpinned the values and modest, unpretentious personality of Ronson. Originally working with Hull City Council while he pursued his craft with consummate dedication, word of his talent reached Bowie who grabbed at the chance to work with Ronson, and from there rock history was made. “The Man Who Sold the World”, ‘Aladdin Sane’ “Hunky Dory”, “Jean Genie, all were constructed with Ronno on guitar. In 1974, he was voted #2 'Best Guitarist' in Cream magazine (notably Eric Clapton came in third).
Sadly, in 1993 Ronson passed away before receiving the recognition he so richly deserved before taking that final bow, as seen on film, at his last show. He had been making a solo album at the time, which was subsequently finished by his contemporaries. Emperor Media have achieved ultimate authenticity and access in chronicling the life and works of this man, an extraordinary talent who became a cornerstone of rock music and who stood “Beside Bowie” during one of the most memorable periods of his dazzling career.

Praise for “Beside Bowie: The Mick Ronson Story”

“This film pays homage to the astoundingly modest virtuoso, without whom several artists’ albums (including Lou Reed’s Transformer) would be much the poorer” – The Guardian

“Jon Brewer’s new documentary provides great insight into the relationship between David Bowie and his guitarist, MickRonson (left, with Bowie). At its heart, this is a celebration of Ronson, who also worked with Bob Dylan, John Mellencampand Lou Reed…” The Daily Mail

““I didn’t really know what was going on, so I just stood on his left side so I could watch his hands.” And there, on David Bowie’s left side, stood Mick Ronson for 18 glorious months as Ziggy Stardust and the Spiders from Mars blazed a decidedly glamorous trail across the music scene. This exhaustive documentary from Jon Brewer explores Ronson’s contribution to Bowie’s music and career (clue: it was considerable)” – The Times

BESIDE BOWIE: THE MICK RONSON STORY, THE SOUNDTRACK
TRACK LISTING

http://www.cardinalreleasing.com/
Posted by Robert Kinsler at 7:21 AM