Exciting news! The Zombies are back with a new single, and the legendary band plans to release the studio album "Different Game" on March 31, 2023. Listen to the great new jazz-rock track "Dropped Reeling & Stupid" and get more details on the upcoming album below...Robert Kinsler 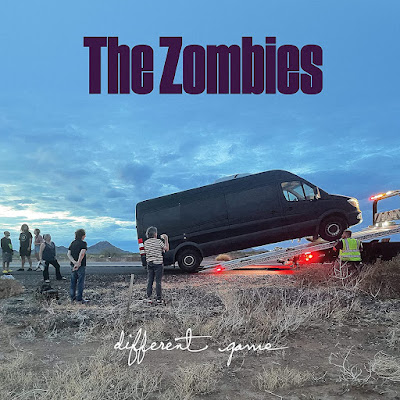 In support of the release, and a forthcoming feature documentary, the band will resume their “Life Is A Merry-Go-Round” Tour in 2023 with appearances at Austin’s famed music & film festival, South by SouthWest (SXSW), new concerts announced in Texas and New Orleans, followed by a full UK run in the Spring, and more extensive touring planned throughout the year. The Zombies began work on the album, titled Different Game, after their 2019 induction into The Rock & Roll Hall of Fame and a USA tour with Beach Boys auteur Brian Wilson.

The band, which features founding keyboardist Rod Argent and lead singer Colin Blunstone, along with drummer Steve Rodford, guitarist Tom Toomey and bassist Søren Koch, hoped to finish writing and recording the follow-up to their Billboard-charting 2015 album Still Got That Hunger during a busy 2020 touring schedule, but COVID-19 had other plans for them.

As primary songwriter and producer Rod Argent relates, the band was not content to record remotely: “Making this album has been a joy from start to finish. Post-lockdown, we were absolutely determined to come together and record in as “live” a way as we could - to capture that magical, fleeting quality of energy and immediacy of performance.….“Dropped Reeling & Stupid” is our first streamed release …… Can’t wait for you to hear it!”

Despite the Pandemic, The Zombies made the past three years productive, finishing the album, and giving fans previews of their new songs with a live-streamed concert from Abbey Road Studios London in 2021, and 65 concerts across North America and Europe in 2022 for the launch of their “Life Is A Merry-Go-Round” Tour. Along with rockers like “Dropped Reeling & Stupid”, Different Game will also feature tender acoustic ballads with classical string arrangements, and is produced by Rod Argent together with the band’s longtime live audio engineer Dale Hanson. The album cover for Different Game exemplifies the independent and hard-working spirit of a band that refuses to rest on the laurels of a 6-decade career, and comes from a photo taken by Rod Argent during a touring misadventure in the Arizona desert this past Summer.

Singer Colin Blunstone explains: “We were traveling from Southern California to Tucson, when our tour van’s engine suddenly caught fire! We spent about 5 hours stranded in the remote Arizona desert, but thanks to our intrepid team and crew, we were rescued and made it to our next show! It was a harrowing experience, but also beautiful and surreal.” The animated lyric video for “Dropped Reeling & Stupid”, produced by Animind Studio, is inspired by the band’s desert mishap. The album is being released in advance of a new feature documentary entitled Hung Up On A Dream, directed by musician and filmmaker Robert Schwartzman, and co-produced by Schwartzman’s Utopia Films, The Ranch Productions, and Tom Hanks’ Playtone, slated for release later in 2023.

You Could Be My Love

Love You While I Can

I Want to Fly

Got to Move On

The Sun Will Rise Again

Check out the band's upcoming tour dates via The Zombies' website HERE.

The second UK band following The Beatles to score a #1 hit in America, The Zombies infiltrated the airwaves with the sophisticated melodies, breathy vocals, choral back-up harmonies and jazzy keyboard riffs of their 1960’s hit singles “She’s Not There” and “Tell Her No.” Ironically, the original lineup disbanded just prior to achieving their greatest success – the worldwide chart-topping single “Time of the Season,” from their swan-song album Odessey and Oracle, ranked in the Top 100 of Rolling Stone’s ‘500 Greatest Albums of All Time.’ To this day, generations of new bands have cited The Zombies’ work as pop touchstones, and the band continues to be embraced by new generations of fans. Following the break-up of the original band, Blunstone went on to develop an acclaimed solo career, while Argent rocked arenas in the 1970’s with his eponymous band ARGENT, but the legend of The Zombies continued to take on a life of its own. By the start of the new Millennium, Blunstone and Argent were inspired to resurrect The Zombies, which has led to several critically-acclaimed new albums and 2 decades of worldwide concert performances.

For More Information On The Zombies:

Cooking Vinyl, established in 1986, is home to an eclectic mix of artists including The Darkness, Professor Green, Ladytron, Dave Rowntree, Don Letts, Passenger, Sophie Ellis-Bextor, Billy Bragg, The Fratellis, Del Amitri, BABYMETAL, The Waterboys, Ron Sexsmith, The Jordan and many more. Recent successes include: Shortlisted for the 3rd year running for the Music Week Awards - Best Label/Artist Services Company. Nina Nesbitt surpassing over 1 billion career streams and gaining 278 New Music Fridays across her most recent album campaign. Passenger securing #2 UK Album, #2 Swiss Album, #3 German Album, #6 Australian Album, Del Amitri #5 UK Album and highest German chart position of their career and BABYMETAL securing #2 Current Albums, #1 Rock & Indie and #13 Billboard Top 200 in the US. Cooking Vinyl has consistently been at the forefront of the digital revolution and evolution. In 2005 the label set up its own online distribution company, Uploader, which was sold to the Independent Online Distribution Alliance (IODA). Subsequently Cooking Vinyl then set up the independent distribution company Essential Music which was bought by Sony Red in 2016 and soon after became The Orchard UK.

Posted by Robert Kinsler at 9:55 AM