Review: 'The Police: Around The World' is an essential reintroduction to the groundbreaking trio 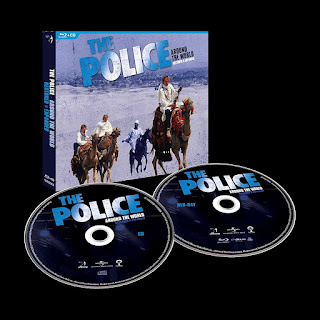 Title: The Police: Around The World Restored & Expanded (Mercury Studios)

Tell me more: With record sales of more than 75 million, The Police are one of the best-selling bands of all time. More importantly, the English rock troupe was one of the most groundbreaking bands to emerge in the late 1970s. In fact, no band has ever blended punk, reggae, jazz and indie rock with the craft and swagger displayed by Sting (lead vocals, bass guitar), Andy Summers (guitar, backing vocals) and Stewart Copeland (drums, percussion, backing vocals). Seemingly at the height of the trio's popularity — following the release of their final studio album (1983's chart-topping Synchronicity) — they disbanded in 1986.

Now the release of The Police: Around The World Restored & Expanded casts a welcome spotlight on the rise of The Police and their ambitious beginnings and truly meteoric rise. The band's first worldwide tour that took them to six continents in 1979 and 1980 is revisited via a remastered and expanded set available in several different configurations. The Blu-ray+CD version reviewed her is a revelation; the remastered audio and restored visual elements are terrific and the overall quality of the title is sure to please casual fans as well as audiophiles. Bonus features on the Blu-ray include complete live performances of "Walking On The Moon," Next To You," "Message In A Bottle" and "Born In The 50's."

Watching Sting, Summers and Copeland perform is great, and the mix of performance footage with behind-the-scenes candid scenes of the members exploring he Great Pyramids in Egypt, exploring ancient ruins in Greece, jamming with traditional instruments in India and one sequence of Summers wrestling in Japan are fun to be sure.

Posted by Robert Kinsler at 9:26 AM