Check out new music from the late great Dr. John and learn more about his forthcoming posthumous album coming this fall..Robert Kinsler 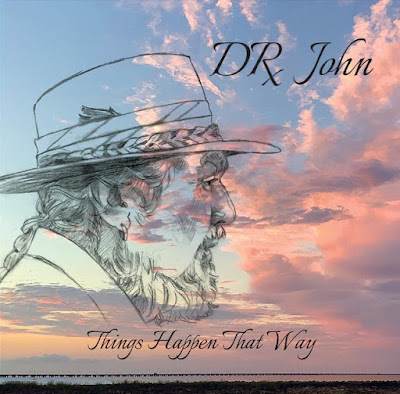 June 10. 2022– Legendary musician Malcolm John “Mac” Rebennack Jr – known to music fans the world over as Dr. John – packed a lot of living into his 77 years, including a six-decade run as one of the most original, distinctive, and influential voices to ever come out of New Orleans. He was in the midst of recording a new studio album and planning future projects when his life was suddenly cut short in 2019.
Now, three years after his untimely passing, in a world complicated by COVID-19, Things Happen That Way will see the light of day. The album, which features three brand new original compositions, a mesmerizing reworking of Dr. John’s 1968 classic “I Walk on Guilded Splinters, and new interpretations of songs by Willie Nelson, Cowboy Jack Clement, Hank Williams, and the Traveling Wilburys will be released on September 23. The album is available for pre-order HERE.

Listen to it HERE.

The lyrics impart some hard-won wisdom drawn from Rebennack’s own experiences, delivered in his trademark growl:

the hand's been already dealt

Don’t try and laugh at the same old jokes,

Don’t try and drive with one eye closed,

one tire in the ditch

Walk around with your head in the sand,

And what’s heard is heard

Done is done in this great big world

One thing I know is life has shown

Things Happen That Way marks the fulfillment of a longtime goal of the six-time GRAMMY-winning singer/songwriter/pianist and Rock & Roll Hall of Famer, who first began plotting a country-inspired album decades ago. In bringing his album’s songs to life, Dr. John drew on a lineup of musicians befitting of a universally beloved luminary. Along with an elite cadre of New Orleans session players, the album’s personnel include icons Willie Nelson and Aaron Neville, and rising stars Lukas Nelson & Promise of the Real.

Karla R. Pratt, Dr. John’s daughter and the album’s executive producer, spoke with Rolling Stone’s David Browne about what inspired Rebennack’s choice of cover songs, calling them “’a musical tip of the hat to the greats who preceded him,’ like Williams, Cash, and Nelson.”

“Years ago he talked about how hip Hank Williams was,” she told Browne. “He loved how simple yet emotionally complex Hank’s songs are, that they have a hook with a twist. For this album inspired by listening to the Louisiana Hayride [radio show] and icons of country and western, he was excited to do songs in a way that evokes emotion that sticks with you long after one of the songs — done his soulful way — is played.”

Posted by Robert Kinsler at 7:14 PM