Concert Review: The Young Dubliners thrill at The Coach House

For more than 30 years the Young Dubliners have been introducing and rewarding audiences with their high-energy and infectious brand of Celtic rock.

Such was the case on Saturday night (July 24, 2021) when founding member/leader Keith Roberts (lead vocals, rhythm guitar) and his talented cast of players (fiddler/multi-instrumentalist Chas Waltz, lead guitarist Justin Pecot, drummer Dave Ingraham and bassist Ethan Jones) thrilled a near-capacity crowd at The Coach House in San Juan Capistrano, CA.
Covering an Irish music-themed Battle of the Bands event at Old World Village in Huntington Beach at the dawn of the 1990s was not only my first-ever music-related assignment as a contributing writer for The Orange County Register but it was my bona fide introduction to Celtic rock music. In addition to the Los Angeles-based Young Dubliners being on the bill, Orange County's own rising the Fenians and New York's Black 47 took the stage and delivered rousing sets that day as well. I was hooked and have been a fan of the Young Dubs and Irish rock since.

Fast forward 30 years and Roberts and company are as potent as ever. Over the course of 100 minutes on Saturday night, the quintet delivered 22 selections; I was not the only attendee at the Coach House impressed by a rich set showcasing material from across their strong discography. Essentially, the band has long been able to delight with both original songcraft and classic material using a mix of modern rock instincts with the additional flavors of traditional instruments such as fiddle and mandolin to enhance the approach.

When the house lights dimmed Roberts took the stage with his acoustic guitar in hand and began strumming via a long instrumental opening. One by one, the other members of the band joined him as the power of the instrumental "Open Sea." That inspired opener was a definite prelude of things to come, with the follow-up "Seeds of Sorrow" a rousing original with an uptempo sweep and sing-along chorus.

"We made it," Roberts said after that well-received track from the band's most recent studio album Nine - 9 -Naoi. "Shall we have some fun?"

The uptempo rocker "We The Mighty" and "Up in the Air" were other early highlights of the night, both showcasing the Young Dubs' ear for fusing melodic and indie rock with skillful firepower. Roberts was locked in with the audience and truly seemed to be enjoying every minute of being back at the venue after so long away during the pandemic lockdown.

The acoustic folk rocker "Come Back Home" (from the band's 2005 album Real World) was noteworthy for two impressive instrumental breaks where fiddler Waltz and guitar master Pecot dazzled with a tandem lead section bolstering the song.

The band slowed things down for "Raglan Road," a ballad where Roberts sang accompanied by the keyboards in the opening section before the other members artfully joined in as the song grew in power.

Waltz impressed throughout the night with his mastery playing fiddle, mandolin, harmonica and keyboards so it's no surprise he was given an extended fiddle solo late in the set too.

Other highlights of the night included a version of "The Leaving of Liverpool," with Waltz blasting harmonica and a blistering guitar solo from Pecot positioned atop a truly in-the-pocket groove provided by Jones and Ingraham; during the instrumental "Ashley Falls" Pecot stepped off the main stage and walked down one of the dinner tables to showcase his signature fret work closer to the crowd.
The closing selections of the night included a rollicking "Follow Me Up To Carlow," and encore that included the wild instrumental "Banshee," and powerful takes on the Pogues' 1988 Shane MacGowan-penned "If I Should Fall From Grace With God" and the traditional favorite "Follow Me Up To Carlow."
For more information on the Young Dubliners, visit the band's official website HERE.

The night's opener, Orange County area quartet Slim Freaky performed a 35-minute set of original material blending rock, jam, jazz rock and reggae into their own sonic brew. All four of the musicians were excellent players and they received plenty of cheers from the crowd at The Coach House. 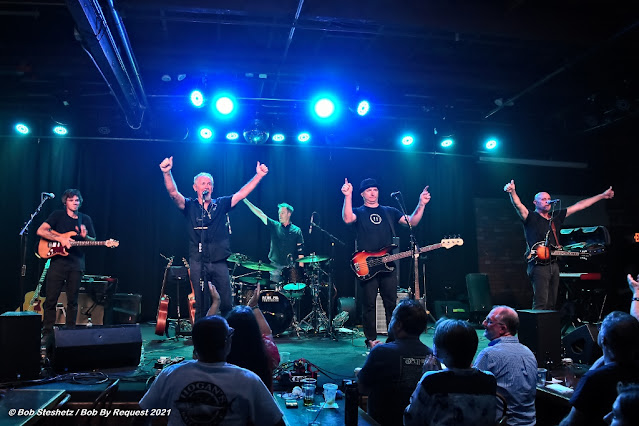 The Young Dubliners setlist at The Coach House on Saturday, July 24, 2021

Posted by Robert Kinsler at 4:20 PM

It was a blast! Everyone on their feet and dancing at their tables for the last half hour! The band appreciated their warm reception from the attendees and the crowd appreciated the music! Win-Win!