Very exciting news that the Cowboy Junkies have a new album on the way, and what's extra exciting, is you can hear the album now via a stream! Read on...


COWBOY JUNKIES TO RELEASE 'ALL THAT RECKONING'

SUMMER TOUR DATES ANNOUNCED; EXCLUSIVE STREAM
“It’s a deeper and a more complete record than we’ve ever done before.  We’ve always tried to make records that are relevant to who we are as people. … These songs are about reckoning on a personal level and reckoning on a social level.” – Michael Timmins 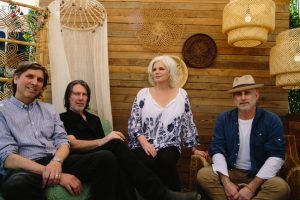 Cowboy Junkies will release All That Reckoning, the band’s first new recording since The Wilderness (2012) on July 13, 2018 via their own Latent Recordings, distributed by Redeye. The band will support the release with a string of spring and summer dates. (see below for full schedule – more dates to be added). Fans can hear an early listen of All That Reckoning Pt 1 via the band’s YouTube page (link below).
Whether commenting on the fragile state of the world or on personal relationships, this new collection of songs encourages the listener to take notice. It also may be the most powerful album Cowboy Junkies have yet recorded.

In the late 80's, Cowboy Junkies proved that there was an audience waiting for something quiet, beautiful and reflective. Their now classic album, The Trinity Session (celebrating 30 years), was like a whisper that cut through the noise and sold more than a million copies. Cowboy Junkies have always remained true to their unique vision, creating a critically acclaimed body of work that has endeared them to an audience unwavering in its loyalty.
In addition to The Trinity Session, albums like Pale Sun, Crescent Moon (1993), Lay It Down (1996) and more recently, Open (2001), and At the End of Paths Taken(2007) chronicle a creative journey reflecting the independent road the band has elected to travel.

To hear an advance stream of the title track All That Reckoning Pt1.
go to https://youtu.be/bLUVYVkAyOE