The Waterboys are on my short list of great bands I've yet to ever catch in concert. Here is breaking news on the band's forthcoming album (set for release next month). 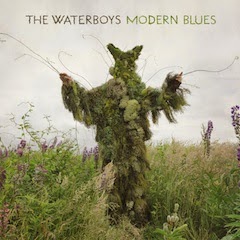 December 15, 2014 – The Waterboys will release a brand new album next month titled: Modern Blues via Kobalt on January 20, 2015.  The album is a first for the band, as it’s the first release fully recorded in Nashville, Tennessee by the group.  Produced by Waterboys leader Mike Scott and mixed by Bob Clearmountain, Modern Blues, the band’s eleventh studio album, contains nine freewheeling rock and roll songs with a southern soul edge, evoking the very best of The Waterboys past work while forging forth to explore new ground.
A new song from the forthcoming album: “Beautiful Now” makes its debut today at BlurtMagazine.com and can be heard here: http://tinyurl.com/mnvfa2v
Modern Blues is now available for pre order here: http://smarturl.it/waterboysmodernblues Everyone who pre-orders the album now will get three tracks immediately: "Beautiful Now," "November Tale," "Destinies Entwined."
Mike Scott entered the studio intent on harnessing the rolling, spontaneous energy that fuelled some of The Waterboys greatest albums. “I set out to make a record with an ensemble playing live, to get that performance spirit. It’s how I recorded Fisherman’s Blues.”  To that end, he corralled old hands and new friends. Ralph Salmins, a mainstay on drums for the past four years, appears alongside Scott and talismanic Waterboy Steve Wickham, who weaves a dizzying fuzz fiddle spell on several tracks of Modern Blues.
Fresh to the ranks of the group are Memphis keyboard player “Brother” Paul Brown, and David Hood, legendary bassist from the heyday of FAME studios and Muscle Shoals.
Asked why he chose to record in Nashville, Scott (who lives mostly in Dublin) explained, “Nashville has a reputation as Music City, USA and I fancied some of that. It’s one of the few cities that still has a recording studio industry intact, which brings the spur of competition. I know that across town Jack White's making a record, The Black Keys are making theirs.  I like that competitive feeling, it’s exciting. It's a spur.”
In true Waterboys’ style, a spirit of exploration defines the album. Few bands have changed as much as this one. Formed in 1983, on their first three albums The Waterboys sculpted a layered post-punk sound, culminating in 1985’s sky-scraping This is the Sea. Since then the music has never ceased to evolve, from the hugely influential mix of Celtic folk, gospel, country and rock on the classic Fisherman’s Blues, to the New York guitar sounds of Dream Harder,the agitated millennial sonic exploration of A Rock in the Weary Land, and the fired-up poetic passion of 2011’s An Appointment with Mr. Yeates.  In 2013 the band embarked an extensive North American tour with over 40 dates.
A North American tour is in the works for The Waterboys in the spring of 2015 with details to be announced very shortly.
Modern Blues Track Listing
Destinies Entwined
November Tale
Still A Freak
I Can See Elvis
The Girl Who Slept For Scotland
Rosalind (You Married The Wrong Guy)
Beautiful Now
Nearest Thing To Hip
Long Strange Golden Road
Listen To “Beautiful Now” Here:
http://tinyurl.com/mnvfa2v
Album Available For Pre Order Today
http://smarturl.it/waterboysmodernblues
Posted by Robert Kinsler at 8:38 AM