Happy Friday everybody. Here are the latest news items of note to land in my inbox! Fans of talented singer-songwriter-keyboardist Vonda Shepard will want to participate in her forthcoming Kickstarter effort. And there is also news about a special television special featuring a performance on "Happy Xmas/War is Over" on the anniversary of John Lennon's tragic murder on Dec. 8, 1980... 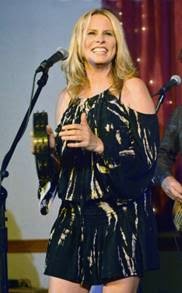 LOS ANGELES, CALIF. (December 5, 2014) – Kicking off on December 8, singer/songwriter Vonda Shepard, turns to fans and followers to help raise the funds to record her fourteenth album through Kickstarter. Most people know Shepard as the musical voice and bar singer in every episode of Ally McBeal as well as the behind the scenes producer for artists such as Gladys Knight, Sting, Barry Manilow, Al Green, Chubby Checker and Jon Bon Jovi. Recently Shepard performed in the revival of Randy Newman’s “Faust: The Concert,” starring Randy Newman, and garnered rave reviews from top critics. “Ms. Shepard’s soulful singing brought out the yearning quality in Mr. Newman’s own,” said Charles Isherwood of the New York Times. David Gordon from Theater Mania stated, “And in one of the year’s great stage moments to date, Newman and multi-Emmy and Grammy winner Shepard brought down the house in the second act with the gorgeous duet, ‘Feels Like Home.’”

From private house concerts to signed platinum records, Shepard has created rewards for those who support, including nostalgic memorabilia and once in a lifetime experiences. This holiday season, Shepard is setting out to raise $35,000 to cover the costs of production. If the campaign exceeds that goal, the funds will go towards adding real strings, horns and other production to the recordings as well as marketing and promotion efforts for the album once released. The campaign kicks off December 8 and will last a month, ending on January 5.

“I have been writing songs for this album for several years now, and I am really excited to share these with my friends and fans,” said Shepard. “The material for the album is comprised of two very diverse styles with half of the songs having a strong emphasis on upbeat, funky dance tunes and the other half focusing on my classic singer/songwriter, heart-wrenching style that I have been known for in the past. I feel that these songs are going to be really gratifying to play live.”

Throughout the Kickstarter campaign, Shepard has set milestone markers to create incentives and perks for her loyal supporters. When she hits specific fundraising goals, Shepard will post behind the scenes video previews of the new record to give followers a taste of what is to be expected. All donors and supporters who give $20 or more to the campaign will also receive a copy of the final album once it is completed and for a $25 donation Shepard will send a signed album. Near the middle of the campaign, Shepard has a scheduled performance at the WitZend in Venice Calif. on December 20 to keep the energy rolling throughout the Kickstarter.

Shepard had her first hit in 1987 with “Can’t We Try,” and followed it up with “Don't Cry Ilene” from her first album on Reprise records. Still, she was a relative unknown when she was picked up in 1997 for “Ally McBeal,” where her popularity skyrocketed. While on “Ally McBeal”, Shepard recorded four albums for Sony 550. Since then, Shepard has released four more albums of original material, two live albums, a live DVD and toured extensively, further solidifying her fan base with her electrifying shows. In addition, she opened for Sugarland’s summer 2010 and 2011 tours and has been performing at her own international and domestic concerts, plus numerous private and fundraising events.
Following the Kickstarter campaign, Shepard has scheduled shows at Feinstein’s in San Francisco on January 16 & 17. She also has a planned concert at the Belly Up in San Diego with date to follow.

To support and follow the progress of Shepard’s Kickstarter campaign, or to learn more about her upcoming performances please visit www.vondashepard.com.

About Vonda Shepard:
Vonda Shepard is a singer/songwriter and musician, best known for being former musical director of Ally McBeal and recently acting and singing on stage in the New York revival of Randy Newman’s “Faust: The Concert” starring Randy Newman. Shepard is currently writing her fourteenth album with plans for a summer 2015 release. To fund the album, Shepard created a crowdfunding Kickstarter campaign that will run from December 8 to January 5. For more information on Shepard and her music visit www.VondaShepard.com. Become a fan at Facebook.com/VondaShepard or follow on Twitter @VondaShepard.

Rockers coming to Hallmark Channel on December 8, 2014 to celebrate message of peace during holidays

Richie Sambora, Orianthi and a children’s choir from the School of Rock LA will take the Home & Family stage on Monday, December 8, 2014 for a moving performance of the classic song “Happy Xmas/War Is Over.” Tune into the Hallmark Channel at 10 a.m. ET/PT. After choosing this song to perform at The 83rd Annual Hollywood Christmas Parade, Richie had the children over to his home to rehearse and spoke to them about the peaceful message of the song. He was taken aback by how beautiful they sounded – the children singing the John Lennon lyrics pays ultimate tribute to the spirit in which the Beatle wrote the song. A torrential rain storm prevented the Parade performance from happening, and now they finally have the opportunity to perform the song together for the first time on Home & Family. Be sure to tune in to catch this special moment!
Posted by Robert Kinsler at 11:15 AM