The story of one of rock's greatest creations is coming to DVD and Blu-ray next month. Here is the full media release from Eagle Rock Entertainment.


EAGLE ROCK ENTERTAINMENT PROUDLY PRESENTS
THE WHO
SENSATION – THE STORY OF TOMMY
~AN EPITAPH OF ROCK HISTORY EXPLORED~
~ON DVD, BLU-RAY AND DIGITAL FORMATS MARCH 11, 2014~ 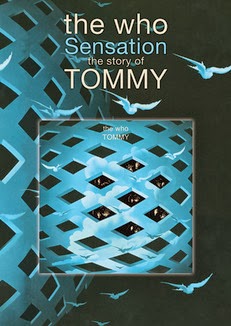 Eagle Rock Entertainment is about to explore one of rock music’s shining masterpieces: The Who’s Tommy. Sensation – The Story Of Tommy will be released on DVD, Blu-ray, and digital formats on March 11, 2014.
Fully supported and endorsed by The Who, Sensation – The Story Of Tommy explores the background, creation, and impact of this seminal album. Through brand new interviews, the film unveils the history and cultural impact of Tommy through new interviews with Pete Townshend and Roger Daltrey, archive interviews with the late John Entwistle, contributions from engineer Bob Pridden, artwork creator Mike McInnerney, plus others involved in the making of the album, as well as journalists who assess the album’s historic and cultural impact.   Originally aired on BBC TV in August 2013, this version includes additional material not featured in the TV broadcast, as well as a bonus 33-minute feature from the 1969 German TV show “Beat Club.” This feature, which includes previously unreleased footage, includes tracks from the album and interviews with band members.
Released in 1969, Tommy was a milestone in rock history, and marked a new chapter in the band’s career. Selling more than 20 million copies worldwide, the double-album established Pete Townshend’s prowess as not only a musician, but a composer, and further solidified Roger Daltrey as one of rock’s foremost frontmen. A concept album exploring the story of a blind pinball ace, Tommy proved that rock music was a viable vehicle for storytelling, and was the first album to be overtly billed as a rock opera. It was later re-imagined as a film by Ken Russell in the mid-seventies, and a touring stage production in the early nineties.
The direct-to-consumer store for Sensation – The Making Of Tommy is now live at http://www.myplaydirect.com/the-who, which includes exclusive bundles with the DVD or Blu-ray, T-shirt, and a 18X24 poster. Fans have until February 20 at 12 p.m. EST to pre-order one of several bundles, and have his or her name included on the poster.
For a sneak peak of Sensation – The Making Of Tommy, here are some video clips:
“Making People Feel” - http://www.youtube.com/watch?v=6o596qXRP90
“Screening Interview” - http://www.youtube.com/watch?v=qIXLwyfKNao
Eagle Rock Entertainment is the largest producer and distributor of music programming for DVD, Blu-Ray, TV, Audio and Digital Media in the world.  Eagle works directly alongside talent to produce top quality, High Definition and 3D programs, both concerts and documentaries, including The Rolling Stones, Pink Floyd, The Who, Queen, The Doors, Jeff Beck, U2, Peter Gabriel, Paul McCartney and Ozzy Osbourne. Eagle is a Grammy Award winning company and has received over 30 multi-platinum, over 50 platinum and over 90 gold discs, worldwide.  Eagle Rock Entertainment has offices in London, New York, Toronto, Paris and Hamburg.
Follow Eagle Rock Entertainment at:
Facebook:  www.facebook.com/EagleRockEnt
Twitter: www.twitter.com/EagleRockNews
YouTube: www.youtube.com/user/eaglerocktv
Posted by Robert Kinsler at 10:46 AM