I loved this duo when I caught them earlier this month opening for Los Lonely Boys at the Coach House in San Juan Capistrano, CA (Read my review of that show here). Great news they are making the trek to Austin in March. 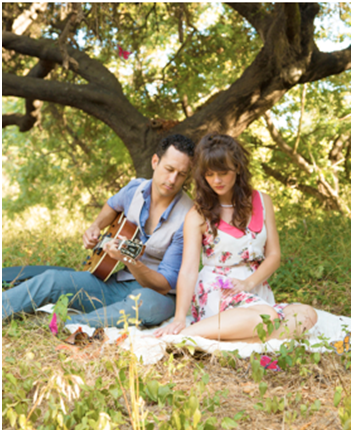 Huntington Beach, CA - February 27, 2013 - The American duo, David & Olivia, will be heading to Austin for South by Southwest 2014! Upon meeting each other one summer night in 2011, the two felt an instant musical chemistry that would blossom before captivated audiences in vineyards along the California coast.  In 2013, they showcased their unique blend of melancholy blues and country sweetness in their debut EP, On the Sea. The EP was heralded by press in both, the US and UK, and the duo toured relentlessly coast-to-coast from New York City listening rooms and Boston pubs to Napa Valley wineries and Los Angeles clubs, amassing over 160 performances in 2013 alone.  In a review of a recent live show, LA's modern rock radio station, 106.7 KROQ, declared that David & Olivia were, "...effervescent...their energy was a mixture of vaudevillian and romantic; something right out of an old Western comedy."

When discussing On the Sea with us, David warmly recounts that "the sound is fairly simplistic really, it comes down to our two contrasting voices that blend and intertwine with an acoustic guitar.  We had the fortunate opportunity to dig deep and flush out the songs with the help of our friends from Donavon Frankenreiter's band.  What came out were a collection of songs that gather in a place where the calmness of the vineyard meets the unrest of the Pacific ocean."

This will be the second consecutive year that the duo will be in Austin for the South-by-Southwest festivities.