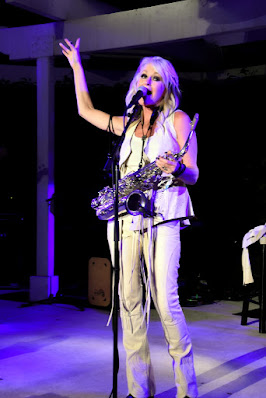 Famed singer-songwriter/composer/saxophone great Mindi Abair ushered in the three-day Newport Beach Jazz Festival with an energetic and diverse two-hour set in front of a sold-out crowd at the Back Bay Amphitheater at the Hyatt Regency Newport Beach on Friday night, Oct. 8. 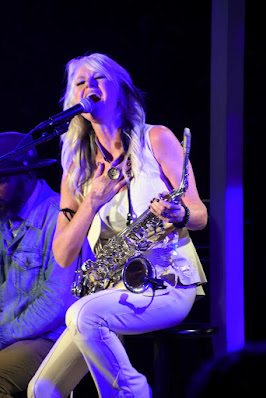 Featuring material from her outstanding 21-year discography, Abair and her top-tier quartet effortlessly fused contemporary jazz, rock, soul and pop during the fast-moving show. Renowned for her prominent role as a guest player for a myriad of talents via studio recordings, television specials and high profile tours, Abair shines even brighter when leading her own band as evidenced by the terrific concert on Friday night.

She opened with the funk-meets-soul instrumental "Wild Heart" (the title cut on her 2014 release), with the Mindi Abair Band (guitarist-vocalist Randy Jacobs, keyboardist-vocalist Rodney Lee, bassist-vocalist Ben White and drummer-vocalist Third Richardson) dialed into the dynamics of the winning introduction.

The genre-blending instrumental "Haute Sauce" blended an up-tempo blues groove with Abair's virtuoso lead saxophone playing. Jacobs also was featured adding some flashy fretwork during the ambitious selection.
On the eve of what would have been John Lennon's 81st birthday, Abair and company performed an artful and jazz-styled reworking of "Imagine." That emotive cover was followed by a poignant version of her own lavish "True Blue."
Early in the show Abair noted how "We are so happy to be back," acknowledging how difficult the pandemic has been for performers and audiences to be apart. There was a power to the show that served as a reminder how good it is to celebrate the union of artists and crowds again.
The rest of the first set included a tender take on the acoustic blues ballad "I'll Be Your Home," "Be Beautiful" (bolstered by some terrific vocal harmonies from her band members) and a nice clap- and sing-along from the crowd; the recent composition "April" (featured on her 2021 The Best of Mindi Abair release) was at once beautiful and a perfect showcase for Abair's artistic range on the saxophone.

Abair and her backing outfit continued to deliver terrific cuts in the second half of the show. Abair's "Pretty Good For A Girl" was a rollicking blues track where she used her powerful vocals and masterful sax work to fire back at the old adage not fully acknowledging the talents of a female musician — even one as clearly great as Abair. There were moments where band members Lee, Jacobs and White were all featured in track-driving solos. Abair even went out into the crowd at one point, with excited audience members getting up to dance with her while she soloed on her sax. The event ended with the energetic encore "Baby Get It On," with Abair sharing lead vocals with Richardson.

Posted by Robert Kinsler at 6:12 PM