The parade of promising 2021 releases continues next month with Deep Purple's forthcoming return "Turning To Crime." (you can read my glowing review of the band's 2020 album "Whoosh!" HERE). Below is the official media release; this time the classic rock heroes cover some of their favorites...Robert Kinsler 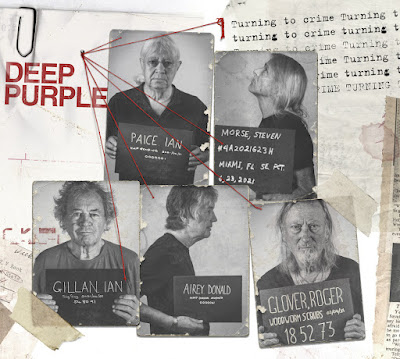 Turning To Crime arrives only 15 months after Whoosh! – Deep Purple’s 21st studio album, which received acclaim by critics who praised the creative strength of a band that continues evolving with every release, and prestigious chart achievements (3rd consecutive #1 in Germany, #4 in the UK, and topped the US Independent Album and Hard Music Albums charts).

This new release is Deep Purple’s first album of tracks that weren’t written by the band; a collection of songs previously recorded by other artists.

The first single “7 And 7 Is” will be released on October 6th.

Turning To Crime continues the creative trajectory set in motion with Deep Purple’s “time trilogy”, consisting of NOW What?! (2013), inFinite (2017), and Whoosh!. Each produced by Bob Ezrin, these albums sold over 1 million copies, topped the charts 11 times, and garnered more than 40 Top 10 positions worldwide.

9) The Battle Of New Orleans

Posted by Robert Kinsler at 8:38 AM