As the official release date for Carlos Santana's "Blessings and Miracles" draws near, we continue to be treated to great advance tracks from the Oct. 15 release. Check out the newly-released "Joy" featuring Chris Stapleton...Robert Kinsler 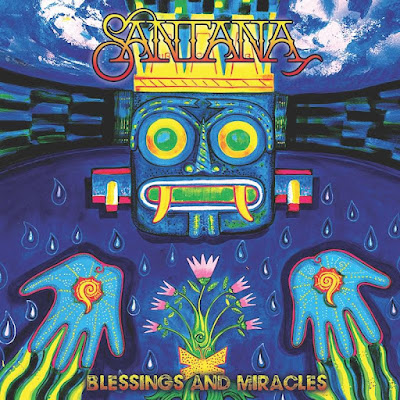 LOS ANGELES, CA (October 11, 2021) – Multi-Grammy Award-winning Rock and Roll Hall of Fame guitarist Carlos Santana has released the fourth song off his star-studded, masterful new album, Blessings and Miracles (out via BMG on October 15), a collaboration with acclaimed Grammy-winning musician Chris Stapleton, who also produced the track, on the soul-enriching “Joy.”
Listen to “Joy” HERE.
Pre-order Blessings and Miracles HERE.
Spend a few minutes around Carlos Santana, and you’re bound to hear the word “joy” more than a few times, so it’s only fitting that the album’s fourth song, which teams the guitarist with Stapleton, is called “Joy.”
It’s a marvel that unfolds almost cinematically – one can envision mountain vistas and expansive plains – blending country, reggae, blues and gospel with a widescreen sing-along chorus. Stapleton is in peak form, plaintive and passionate, and Santana’s guitar playing, each immaculate solo and response, rises to meet him.
“I was very intrigued to work with Chris,” Santana says. “We talked on the phone about the Covid situation and how there’s so much fear in the world, and I said, ‘We need to create music as a healing force. We must bring hope and courage and disinfect twisted minds infected with darkness.’ That gave him the ammunition to write such incredible words. Somewhere I said, ‘flying on the wings of angels,’ so it’s a collaboration. And what an incredible song it is. The choir in it – it’s like the Staple Singers.”
In addition to “Joy,” the album’s first single “Move,” featuring Rob Thomas and American Authors, Santana’s collaboration “She’s Fire” with Diane Warren and G-Eazy, and the classic “Whiter Shade of Pale” featuring Steve Winwood is available now.
Blessings and Miracles is one of the most ambitious, inspired and magical albums of Santana’s storied career, on which the legendary guitarist aims higher than ever. “The title of this album comes from my belief that we’re born with heavenly powers that allow us to create blessings and miracles,” Santana says. “The world programs you to be unworthy of those gifts, but we have to utilize light, spirit and soul – they’re indestructible and immutable. Those are the three main elements on this album.”
In addition to the above talents, Blessings and Miracles sees Santana collaborating with a diverse host of brilliant artists, writers and producers including Chris Stapleton, Chick Corea, Rick Rubin, Corey Glover, Kirk Hammett, Ally Brookeand Narada Michael Walden, among others, on genre-bending, hook-filled knockout musical celebrations.
The record also features bravura performances from members of Santana’s touring band (including drummer Cindy Blackman Santana, singer Tommy Anthony, bassist Benny Rietveld, percussionist Karl Perazzo, and keyboardist David K. Matthews), as well as impeccable vocals and keyboards by the guitarist’s son, Salvador Santana, and stunning lead vocals by daughter, Stella Santana.
Santana just wrapped a summer tour in the US and will continue their multi-year residency at the House of Blues at Mandalay Bay Resort and Casino in Las Vegas with upcoming dates from November 3 thru December 11.
For more information and tickets, please visit:
Santana.com.
About Carlos Santana:
For more than five decades – from Santana’s earliest days as a groundbreaking Afro-Latin-blues-rock fusion outfit in San Francisco – Carlos Santana has been the visionary force behind artistry that transcends musical genres and generational, cultural and geographical boundaries. To date, Santana has won ten Grammy Awards and three Latin Grammys, with a record-tying nine Grammys for a single project for 1999’s Supernatural (including Album of the Year and Record of the Year for “Smooth”). He has received the Billboard Century Award (1996), was ushered into the Rock and Roll Hall of Fame (1998), received the Billboard Latin Music Awards’ Lifetime Achievement honor (2009), and was the recipient of the Kennedy Center Honors Award (2013). Among many other distinctions, Carlos Santana has been cited by Rolling Stone as #15 on their list of the “100 Greatest Guitarists of All Time” and has joined the Rolling Stones as one of only two bands to have an album reach the Top 10 in every decade since the 1960s. In 2018, he released his first MasterClass, and recently celebrated three epic milestones – the 20th anniversary of his groundbreaking album Supernatural, the 50th anniversary of his legendary performance at Woodstock, and the 50th anniversary of his masterpiece Abraxas.
About Chris Stapleton:
Kentucky-born Chris Stapleton is a multiple Grammy, CMA and ACM Award-winner and one of the country’s most respected and beloved musicians. In the midst of yet another monumental year, Stapleton leads nominees at the 55th Annual CMA Awards with nominations in five categories: Entertainer of the Year, Male Vocalist of the Year, Album of the Year (Starting Over), Single of the Year (“Starting Over”) and Song of the Year (“Starting Over”). Released last November and once again recorded at Nashville's legendary RCA Studio A with Grammy Award-winning producer Dave Cobb, Starting Over won Album of the Year at the 56th ACM Awards and landed on several “Best of 2020” lists including NPR Music, Rolling Stone, Billboard, Esquire, Vulture, The Tennessean and The New York Times, who praises, “lands precisely where country meets Southern soul: with grit, details, clarity and ache." Moreover, The Associated Press declares, "a sure-footed masterpiece…one of the year’s finest albums" and GQ proclaims, “mixes beautifully stark songwriting with blues, country, and rock melodies, allowing Stapleton’s sturdy, propulsive vocals to carry the show.” His fourth studio album, Starting Over follows Stapleton's quintuple platinum breakthrough solo debut, Traveller, as well as his two #1 albums from 2017: From A Room: Volume 1 (certified platinum) and From A Room: Volume 2 (certified gold). Adding to his triumphant career, Stapleton is currently in the midst of his extensive "All-American Road Show" tour with upcoming stops at New York's Madison Square Garden, Nashville's Bridgestone Arena, Washington State's Gorge Amphitheatre and University of Kentucky's Kroger Field among several others.
Posted by Robert Kinsler at 10:25 AM