One of the essential artists I plan to catch when I cover Coachella next month is Billie Eilish. I've been enjoying her new album and below are more details on this exciting young artist from Los Angeles...


Coachella-bound songstress Billie Eilish releases debut album 'When We All Fall Asleep, Where Do We Go?'(DARKROOM/INTERSCOPE RECORDS) New single and video for "Bad Guy" is out today 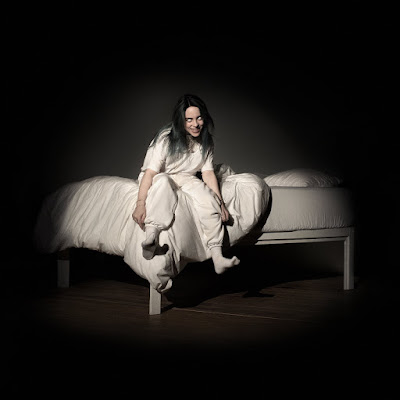 PERFORMED ON 'JIMMY KIMMEL LIVE!' LAST NIGHT AND SET TO APPEAR ON THE ELLEN DEGENERES SHOW AS PERFORMER AND SPEAKING GUEST MONDAY, APRIL 1

LISTEN
‘WHEN WE ALL FALL ASLEEP, WHERE DO WE GO?’Apple Music | iTunes | Spotify | Amazon | Google Play | Pandora | YouTube

“A voice of a generation that desires authenticity above all.” - TIME Magazine
"The debut album from the meteoric pop star lives in a world of its own: gothic, bass-heavy, at turns daring and quite beautiful.” - Pitchfork
"Noir pop with teeth." - Rolling Stone
“Thrilling Gen Z terror-pop.” - Guardian
"A collective middle finger to the strictures of teen-pop sex appeal." - The New York Times

"She's the real deal." - Variety
"Billie Eilish’s time is now...She’s no longer a phenomenon coming up from behind — she is here, fully formed, ready to dominate.” - Stereogum
"'When We All Fall Asleep' is an album full of dressed-down avant-pop with DIY immediacy and intimacy that can still hold its own amid pop maximalists like Ariana Grande and Halsey." - Rolling Stone

WHEN WE ALL FALL ASLEEP, WHERE DO WE GO? Is out now on all platforms worldwide and features global smashes “bury a friend,” “you should see me in a crown,” “when the party’s over,” and “wish you were gay,” plus 10 previously unheard tracks including Billie’s latest single “bad guy,” which comes with an official video, directed by MTV VMA-winner (Kendrick Lamar’s ‘Humble’) Dave Meyers.

Yesterday, Billie Eilish made her Jimmy Kimmel Live! debut and performed “bury a friend” in-front of a live audience. On Monday, April 1 she will be a talking guest performing live on The Ellen DeGeneres Show (check your local listings).

This weekend, in partnership with Spotify, and curated entirely by the 17-year-old artist, The Billie Eilish Experience boasts a fully immersive, highly visceral “enhanced album experience.” The labyrinth of rooms hosted at The Stalls at Skylight Row in Downtown Los Angeles will converge art, technology and the unexpected, creating a cerebral storytelling experience that is authentically Billie Eilish. Listen to the Billie Eilish Experience Playlist on Spotify HERE.

In other news, Billie Eilish shattered Apple Music’s record, amassing more than 800,000 Pre-Adds on the album. Listen to the album on Apple Music HERE.

WHEN WE ALL FALL ASLEEP, WHERE DO WE GO? comprises of fourteen tracks that materialize as ghostly genre-less pop projections of life’s firsts for the multi-platinum songstress as she ruminates on her first brushes with loss and love amidst the monsters under her bed and the triumphs at her feet.

“Nobody knows what the fuck dreams are, dude,” she exclaims. “You can’t give me a good enough answer as to what dreams are. Nobody can. Dreams are a big thing in my life though. They’ve always really occupied me. It’s all in the music.” One daydream manifested to set the stage for such provocation. Within three years since her 2015 debut, Billie quietly, yet unapologetically infiltrated the forefront of pop. Along the way, she and her chief collaborator, producer, multi-instrumentalist, and big brother Finneas O’Connell crafted what would become WHEN WE FALL ASLEEP WHERE DO WE GO? Keeping the creativity in-house, literally, they retreated back to Billie’s childhood home. Once again, they worked in Finneas’ bedroom—two feet from Billie’s room—where the songs not only came to life, but also all of the dreams. “There were a lot of opportunities and things I said, ‘No to,” she grins. “We had to do this album our way. I realized how lucky I am to have my brother in this. If I didn’t have him, I would have to figure out what the hell I was doing without someone else there with me!”

"I want people to listen,” she leaves off. “I want to be heard, and I want people to feel heard. Nothing on this album sounds the same, but it all adds up to a whole. Since I first started doing music, my life has changed a lot. One thing that hasn’t changed in my music is that I still just do me.”

WHEN WE ALL FALL ASLEEP, WHERE DO WE GO? is out everywhere now.
Apple Music | iTunes | Spotify | Amazon | Google Play | Pandora | YouTube

Posted by Robert Kinsler at 9:59 AM