Here is a roundup of some of the most noteworthy items to land in my inbox this week. 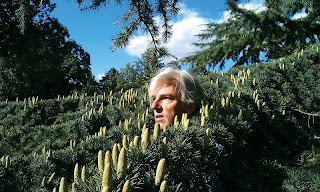 Yep Roc Records is excited to announce the March 5, 2013 release of the new Robyn Hitchcock album, Love From London. The record was produced and engineered by Paul Noble, and features Noble on bass, guitar, keyboards and vocals; Jenny Adejayan on cello and vocals; Lizzie Anstey on vocals and keyboards and Jenny Macro, Lucy Parnell and Anne Lise Frokedal on vocals. A lo-fi rehearsal video featuring Green Gartside, Stephen Irvine, Terry Edwards, Mark Bedford, Adejayan and Noble in a London pub on a Sunday performing "Be Still" from the new album is available for posting HERE.

Hitchcock also celebrates his 60th birthday next March with a retrospective show on February 28th at the Village Underground in London where he will be playing songs from each of his albums, accompanied by some of his favorite British musicians.

Hitchcock describes his songs as "paintings you can listen to." Love From London"celebrates life in a culture imperiled by economic and environmental collapse," he says. "We are surfing on the momentum of chaos. If a consensus on global warming comes from the people, then the media, the politicians, and the corporations will h
ave to adapt to it. Rock and Roll is an old man's game now, so I'm staying in it."

Born in London in 1953, Robyn Hitchcock has written and recorded over 500 songs, including: "Where Are The Prawns," "I Wanna Destroy You," "The Cheese Alarm," "Sometimes A Blonde," "No, I Don't Remember Guildford," "To Be Human," "Where Do You Go When You Die," "Uncorrected Personality Traits," "Full Moon in My Soul," "Chinese Bones," "Madonna Of The Wasps," and recently a lament for the Arctic polar thaw "There Goes The Ice," recorded with KT Tunstall, with whom he was on a Cape Farewell environmental expedition to Greenland in 2008.

In 1996 Jonathan Demme directed an in-concert film about him in New York called Storefront Hitchcock, and in 2003 cast him in his remake of The Manchurian Candidate and in 2007's Rachel Getting Married.

The tracklisting for Love From London is below:

Los Angeles punk icons Bad Religion will release the title song off their upcoming new album True North today.  The new single utilizes a wall of bristling guitars and charging punk rock beats to explore issues of alienation and loss informed by vocalist and co-songwriter Greg Graffin’s recent life experiences. The new album arrives January 22, 2013 via  Epitaph Records Listen to the new Bad Religion single “True North” by going to:http://www.youtube.com/watch?v=OKflTc_RT6U “The song is written from the perspective of a kid who is running away,” Graffin explains. “He says ‘I’m out of here, I’m off to find true north.’ It’s about recognizing that you don’t fit in and trying to find a truth and purpose. Those are all classic punk themes. We still remember exactly what it feels like to be a disaffected kid in this world. And I think we were able to convey that particularly well on this album.”

Fans can pre-order the album True North by going here:http://www.kingsroadmerch.com/bad-religion/region/

On December 18, KISS will release their first ever iBook for their critically acclaimed, recent studio album release, MONSTER.  The content of the iBook is comprised of a special edition digital book which includes an exclusive bonus video, “Shout It Out Loud (Live in Anaheim 1976),” interviews with all four members as well as a multitude of additional unpublished pictures and a preview for the blistering new music for DESTROYER: RESURRECTED and MONSTER.

Rock legends KISS returned with Monster, the 20th studio album in their historic career released October 9, 2012, through Universal Music Enterprises. The 12-track, straight-ahead rock ‘n’ roll album features collaborations among all four members—including co-founders Paul Stanley and Gene Simmons and longtime members guitarist Tommy Thayer and drummer Eric Singer—in an album that shows the band at the top of its game. And that’s saying something, considering their illustrious, 40-plus year history—28 U.S. gold albums, the most gold records for any American rock band, 40 million sales in the U.S., and a total exceeding 100 million worldwide.

Posted by Robert Kinsler at 9:00 PM