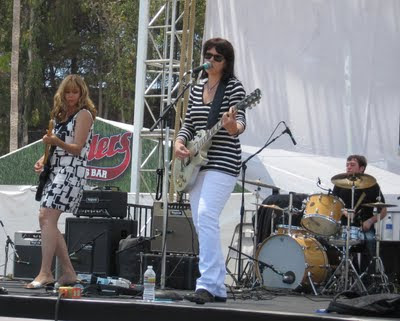 Nushu (from left, featuring singer-guitarists Lisa Mychols, Hillary Burton and drummer Tom Richards) performed at the "Popgarden Radio Presents the Rock on the Road Tour" at the Orange County Fair in July 2011.


Although it are the big names such as Tears for Fears, Duran Duran, Adam Lambert and Heart that will draw the biggest crowds to the Orange County Fair in Costa Mesa this summer (July 13 - Aug. 12, 2012) when they headline as part of the Pacific Amphitheatre Summer Concert Series, there is an under-the-radar day-long mini fest that may well be just as much fun and comes at the mere cost of admission to the fair itself!

Walter Clevenger & the Dairy Kings, Nushu, Popdudes and the Tickets are among the featured power-pop rock acts that will perform at the fair from 11 a.m. to 4:15 p.m. (or so) on Sunday afternoon, July 22. Here is the schedule of times and artists playing that day I have courtesy of an email from Nushu:


Here is the link to Nushu's announcement on Facebook.
Posted by Robert Kinsler at 9:26 AM