My review was originally posted on The Orange County Register site on Saturday, Aug. 13, 2011. I took the photos on the post and those are published for the first time here. 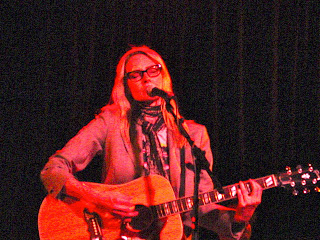 Aimee Mann's headlining appearance at the Coach House Friday night (Aug. 12, 2011) clocked in at a mere 80 minutes, but there were no wasted moments amid a fast-paced show that displayed her ever-deepening skills as a singer, songwriter and bandleader. Kicking off her summer 2011 tour before a near-capacity crowd at the San Juan Capistrano joint, Mann noted she hadn’t played the venue in many years, then got a number of verbal affirmatives from the audience when she asked whether the train still ran nearby.

Backed by a trio, the 50-year-old Mrs. Michael Penn handled all the guitar work during a 17-song set packed with favorites plus two new songs from her as-yet-untitled eighth album (she says recording begins in September).
The fresh material was particularly potent, with Mann explaining that the first of the unveiled tunes (possibly titled “Gumby”) was inspired by someone profiled on an episode of the reality TV series Hoarders. True to her gift of melding masterful melodies with genuine melancholy, the song hit its emotive zenith when Mann sang: “There’s a bottom that you’ll never hit.” Another new one, seemingly about a girl in an abusive relationship, was beautiful, combining straightforward but telling lyrics with a sweepingly gorgeous arrangement featuring keyboardist Jamie Edwards.

With her acoustic guitar and distinctive soprano, Mann also revisited many familiar gems from her catalog. From the involving folk-rock of the upbeat “Going Through the Motions,” bolstered by bassist Paul Bryan’s strong supporting harmonies, and the ’80s-tinged, synth-anchored “Freeway” to a haunting rendition of her Oscar-nominated Magnolia piece “Save Me,” this was a set where the singer, while in very fine vocal form, really let the focus rest on her outstanding songcraft.

The night ended was an encore of two of Mann’s best-known tracks off that Magnolia soundtrack, a sparse take on Harry Nilsson‘s “One” and an epic version of her own “Deathly,” which built in power from a skeletal opening to a big rock finish. 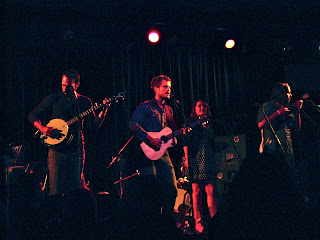 Opening the show was a fantastic, genre-defying young Canadian quintet, the Wilderness of Manitoba (I snapped the photo on the left at the show). The group, which appears at several more Mann shows this month (including Aug. 14 at the Belly Up Tavern in Solana Beach), featured songs from its May debut When You Left the Fire, showcasing a sound that blends indie champions like the Civil Wars and Band of Horses with the early ’70s alt-country magic of Neil Young‘s Harvest era. Four out of the Ontario fivesome greatly used their harmonized voices as a complement to the guitars, percussion, cello, banjo and other instruments artfully employed on “Orono Park,” “St. Petersburg” and other original songs in a fleeting 45-minute set.
Posted by Robert Kinsler at 3:50 PM