Great to see a bona fide classic from John Lee Hooker set for reissue on both vinyl and audio CD next month...Robert Kinsler

SET FOR REISSUE ON 180-GRAM VINYL AND CD 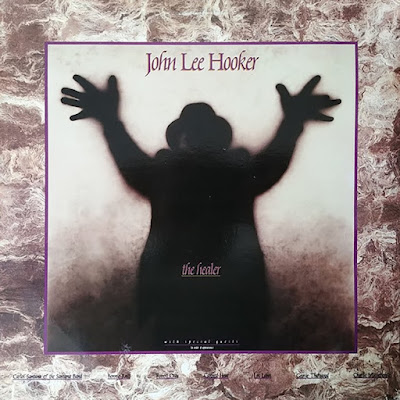 Out of print for more than a decade, the acclaimed 1989 album features guest appearances by Bonnie Raitt, Carlos Santana, George Thorogood, and many others

Includes the GRAMMY®-winning hit “I’m in the Mood”

Los Angeles, CA (September 7, 2022)—Craft Recordings is pleased to reissue John Lee Hooker’s widely acclaimed album, The Healer, on vinyl and CD, after more than a decade of being out of print. The 1989 LP earned the then 73-year-old blues icon his first GRAMMY® Award (for the song “I’m in the Mood” with Bonnie Raitt) and features contributions from a star-studded collection of guest artists, which in addition to Raitt, includes Carlos Santana, George Thorogood, Los Lobos, Canned Heat, Charlie Musselwhite, and Robert Cray. Set for release on October 28 and available for pre-order beginning today, The Healer was pressed on 180-gram vinyl at Quality Records Pressing (QRP), with lacquers cut by the award-winning engineer Bernie Grundman.

Few artists have made such an explosive comeback as Hooker did when he released The Healer in 1989. The prolific singer-songwriter—also known as the “King of the Boogie”—rose to fame in 1948 with the chart-topping R&B hit, “Boogie Chillen’.” Over the next four decades, he worked tirelessly—recording dozens of albums, touring the world, and reinventing modern music along the way. As one of history’s greatest bluesmen, Hooker’s influence spread far and wide, inspiring a generation of musicians across multiple genres, including folk, rock, and blues. A handful of these artists are represented as guests on The Healer.

Recorded at San Francisco’s Russian Hill Recording Studios, the album was produced by guitarist Roy Rogers, who served as a member of Hooker’s Coast to Coast Band and would go on to helm three more records by the artist, including the GRAMMY®-nominated Mr. Lucky (1991) and the bestselling Chill Out (1995). Together, they invited some of the industry’s greatest talents to perform a selection of new and classic material in both stripped-down and full-band settings.

Among the high-profile guests was Bonnie Raitt—a blues star in her own right—who joined her musical hero for the languid “I’m in the Mood.” The single, which Hooker first made a hit in 1951, was reimagined as a sultry and sassy duet. The duo’s interplay was so effective, in fact, that it won them a GRAMMY® for Best Traditional Blues Performance at the following year’s award ceremony. Another disciple of Hooker’s, Carlos Santana, appeared on the airy opening title track. “The Healer,” which became a global hit, paired Santana’s electrifying guitar licks and Latin rhythms with Hooker’s deep, emotive vocals. This creative partnership would continue throughout the ’90s, with Santana appearing on—and producing—several of the elder musician’s biggest albums.

Robert Cray, who represented a new generation of blues stars, would soon become a regular collaborator as well, following his appearance on the funky “Baby Lee.” Cray, who was a decade into his career at the time—having already played alongside the likes of Chuck Berry, Tina Turner, and Eric Clapton—joined Hooker on several subsequent albums, including Boom Boom (1992) and Mr. Lucky. The high-energy “Cuttin’ Out,” meanwhile, reunited Hooker with blues-rockers Canned Heat, with whom he recorded the acclaimed 1971 album, Hooker ’N Heat.

Chart-busting artist George Thorogood, who rose to prominence in the late ’70s blues-rock scene, guested on “Sally Mae” (originally released in 1948 as the B-side to “Boogie Chillen’”), where he delivered an impassioned performance on the guitar. Also stopping by the studio was legendary harmonica player, Charlie Musselwhite, who accompanied his longtime friend on the track, “That’s Alright.” Rounding out the guest list were East Los Angeles rockers Los Lobos, who had recently scored a No.1 hit with “La Bamba” (a cover of the Richie Valens song, recorded for the blockbuster biopic of the same name). The versatile group backed Hooker on the zydeco-flavored “Think Twice Before You Go.”

Hooker also recorded three solo tracks for The Healer, including the stripped-down “Rockin’ Chair,” the wistful ballad, “My Dream,” and the album closer, “No Substitute.” For the latter track, the bluesman delivered startlingly intimate vocals, paired with a lush acoustic guitar and his signature foot tapping, as he declared, “there ain’t no substitute for love.”

While Hooker released several albums in the ’80s, The Healer marked a turning point in his career, marrying the classic style of his heyday with a strikingly modern sound. Critics paid attention as well, showering the artist and his guests with praise. Rolling Stonecalled the record “Brilliant, 100-proof blues,” adding “the spirit that animates this album is the ageless voice of John Lee Hooker and his boogie-man blues. He has conjured up a renewed world blues with the canniness of the hoodoo healers and root doctors who first gave birth to the Delta blues.” In addition to earning Hooker his first GRAMMY® win, the album was also a commercial triumph, peaking at No.62 on the Billboard 200 and selling more than a million copies worldwide.

The success of The Healer opened up a breadth of new opportunities for John Lee Hooker, including a host of eager collaborators and a string of popular releases. The busy bluesman was also able to bask in his status as a living icon. Just two years after the release of The Healer, Hooker was inducted into the Rock & Roll Hall of Fame, while in 1997, he received a star on the Hollywood Walk of Fame and was celebrated with a GRAMMY® Lifetime Achievement Award in 2000. The Blues Hall of Famer was also a recipient of the highly prestigious National Heritage Fellowship from the National Endowment for the Arts—the highest honor that can be bestowed upon those in the folk and traditional arts by the U.S. government. Today, 21 years after his passing, Hooker’s legacy continues to live on through his extensive catalog of recordings, as well as through the many artists whose music he inspired. His work can be heard frequently in films and TV shows, while many of his songs have found a second life through sampling by hip-hop and electronic music’s biggest acts.

Click here to pre-order The Healer and visit JohnLeeHooker.com for exclusive merchandise and more.

1.   The Healer (with Carlos Santana & The Santana Band)

5.   Think Twice Before You Go (with Los Lobos)

1.   The Healer (with Carlos Santana & The Santana Band)

5.   Think Twice Before You Go (with Los Lobos)

Craft Recordings is home to one of the largest and most essential collections of master recordings and compositions in the world. Its storied repertoire includes landmark releases from icons such as Joan Baez, John Coltrane, Creedence Clearwater Revival, Celia Cruz, Miles Davis, Isaac Hayes, John Lee Hooker, Little Richard, R.E.M., Joan Sebastian, and Traveling Wilburys. Plus, the catalog recordings of celebrated contemporary acts including A Day to Remember, Evanescence, Alison Krauss, Nine Inch Nails, Taking Back Sunday and Violent Femmes, to name just a few. Renowned imprints with catalogs issued under the Craft banner include Fania, Fantasy, Fearless, Musart, Nitro, Panart, Prestige, Riverside, Rounder, Specialty, Stax, Vanguard, Varèse Sarabande, Vee-Jay and Victory, among many others. Craft creates thoughtfully curated packages, with a meticulous devotion to quality and a commitment to preservation—ensuring that these recordings endure for new generations to discover. Craft is also home to the Billie Holiday and Tammy Wynette estates which preserve and protect their respective names, likeness and music through day-to-day legacy management of these cultural trailblazers. Craft Recordings is the catalog label team for Concord Recorded Music. For more info, visit CraftRecordings.com and follow on Facebook, Twitter, Instagram, TikTok, YouTube, Apple Music, and Spotify.

Posted by Robert Kinsler at 8:59 AM