Check out this. It is available now! Happy listening everyone! Robert Kinsler

LISTEN TO THEM HERE TheWho.lnk.to/TheStereoBonusTracksPR 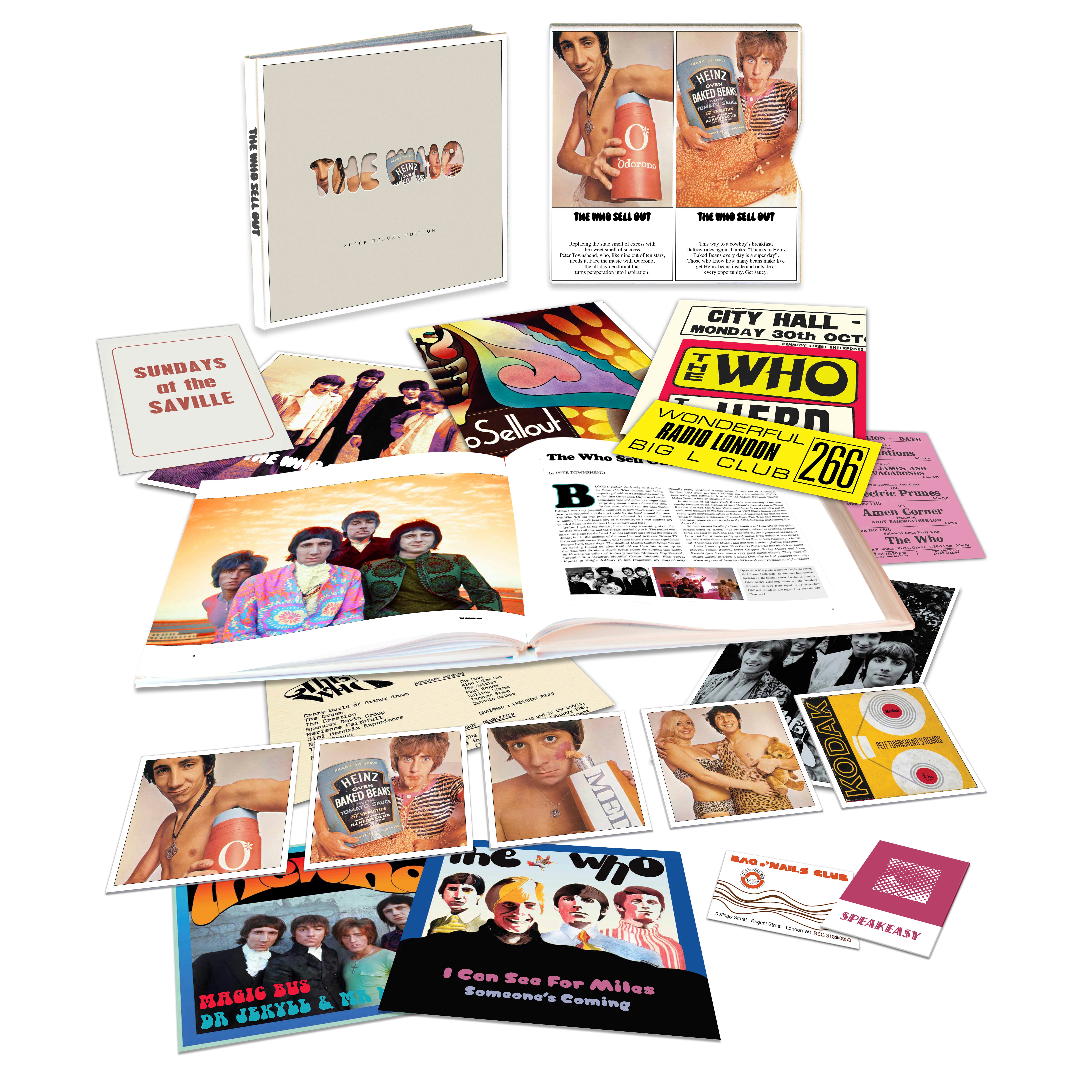 The Who’s Classic Albums Episode: The Who Sell Out

Watch the story behind The Who’s iconic album, streaming FREE April 22 on The Who’s official YouTube Channel and nugs.net

SANTA MONICA, CA – April 2, 2021 – Released in December 1967 The Who Sell Out reflected a remarkable year in popular culture. The album was originally planned by Pete Townshend and the band’s managers Kit Lambert and Chris Stamp, as a loose concept album including jingles and commercials linking the songs stylized as a pirate radio broadcast. This concept was born out of necessity as their label and management wanted a new album and Townshend felt that he didn’t have enough songs.

In the early 1960s, pirate radio stations began broadcasting to the U.K. from offshore ships or abandoned sea forts from international waters to meet the growing need for pop and rock not offered by the BBC at that time. The ground-breaking original plan for Sell Out was to sell advertising space on the album but instead the band opted for writing their own jingles paying tribute to pirate radio stations and to parody an increasingly consumerist society.

The new Super Deluxe Edition of The Who Sell Out features 112 tracks, 47 of which are unreleased, an 80-page, hard-back full-color book, including rare period photos, memorabilia, track by track annotation and new sleeve notes by Pete Townshend.

The Super Deluxe package also includes nine posters and inserts, including replicas of;

As tasters for the set a series of digital EP’s are being released, the third of these released today includes previously unreleased versions of three songs from the studio sessions, the singles “I Can See For Miles” and “Magic Bus” and the outtake “Facts Of Life (AKA Birds & Bees).”

“I Can See For Miles” (Full Version) (Previously Unreleased)

The masterpiece that is ‘I Can See For Miles’ had a long gestation, 6he basic track was cut in London and further overdubs were applied in New York and, according to some unconfirmed reports, Nashville before being mixed and mastered in Los Angeles. This is the complete master (take number unknown) with Pete’s count-in and guitar doodling on the intro and outro.

When scouring The Who’s tape vault for this project, a backing track for ‘Facts Of Life’, a John Entwistle composition, was discovered. A home demo exists of the song with lyrics, but it appears to have only got this far when brought before The Who. Also recorded was an early run-through of ‘Deaf, Dumb And Blind Boy’ (later to become ‘Amazing Journey’ on Tommy). Unfortunately, all that remains is Pete demonstrating the opening section on piano.

Several attempts were made to record this Bo Diddley-flavored composition that Pete had written and demoed back in 1965. “Take 6” starts with Keith playing claves, Pete on electric guitar and John on bass before Keith crashes in on drums. Roger and Pete provide guide vocals. This version was close to how the band performed the song on stage at the time. Another talkback exchange between Kit and Keith re: Moon’s unsolicited vocal interjections closes out the performance.

The homage to Pop Art is evident in both the advertising jingles and the iconic sleeve design created by David King who was the art director at the Sunday Times, and Roger Law who invented the Spitting Image TV show. The sleeve features four advertising images, taken by the renowned photographer David Montgomery, of each band member Odorono deodorant (Pete Townshend), Medac spot cream (Keith Moon), Charles Atlas (John Entwistle) and Roger Daltrey & Heinz baked beans. The story goes that Roger Daltrey caught pneumonia from sitting in the cold beans for too long.

Within the bold concept, were a batch of fabulous and diverse songs. “I Can See for Miles,” a top ten hit at the time, is a Who classic. “Rael,” a Townshend “mini-opera” with musical motifs that reappeared in Tommy and the psychedelic blast of “Armenia City In The Sky” and “Relax” are among the very best material anyone wrote during the 1960s.

One of the most extraordinary albums of any era, The Who Sell Out is The Who’s last “pop” album. Two years later came Tommy – a double concept album about a deaf, dumb and blind kid.

To celebrate the release of The Who Sell Out Super Deluxe Edition, nugs.net, the leading music platform for live concert streams and recordings, have partnered with The Who, UMe, and Mercury Studios, for the livestream premiere of their Classic Albums documentary, The Who Sell Out. The Who is one of the most influential rock bands of the 20th century with over 100 million records sold worldwide, and the documentary explores their groundbreaking record in detail, including a deep dive into the original multi-track recordings, as well as brand-new, exclusive interviews with Pete Townshend, Roger Daltrey, and album producers. Fans can tune in to the free livestream on Thursday, April 22nd at 6pm PT / 9pm ET at nugs.net/thewho. The episode will be available to stream on demand via nugs.net, the nugs.net YouTube page and The Who YouTube page through Sunday, April 25th at 9pm PT / 12am ET. Streaming is available worldwide with the exception of the UK and Ireland.

Set a reminder to watch the premiere on April 22nd: 2nu.gs/WhoSellOut

THE WHO SELL OUT SUPER DELUXE EDITION

Disc 5 - 14 of Pete Townshend’s original demos, previously unreleased and exclusive to this set

THE WHO SELL OUT OTHER FORMATS INCLUDE

Also available in a variety of Digital formats