Gibson Brands, Inc., brought a parade of emerging artists and bona fide superstars to City National Grove of Anaheim on Thursday night (Jan. 24, 2019) to celebrate the guitar maker's return to the NAMM Show. 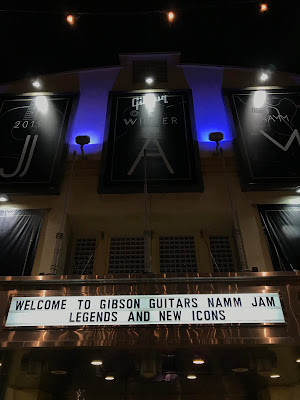 For just under three hours, an enthusiastic, music industry-filled audience was treated to fast-moving performances that showcased a diverse mix of styles (ranging from country and blues-rock to classic rock), all genres associated in large part with Gibson's signature guitar models. What's more, those styles were performed by the very groundbreaking players who helped popularize the instruments.

The future of rock and blues-rock is often debated but it appears to have a solid future, in part, in the hands of 13-year-old Toby Lee. He impressed leading the aforementioned house band before joining forces to rock with emerging guitar great Jared James Nichols.

Helping highlight the diversity of players who use Gibson guitars was country songstress Cam, who performed the tender ballad "Palace" (a song she co-wrote with Sam Smith; the track was featured on that artist's 2017 LP The Thrill Of It All).

Delivering a knock out blow from the moment she took the stage, the formidable singer-guitarist was riveting as she used rapid-fire fret work and forceful vocals, notably on her 2016 single "Atta Blues."

Also making quite a musical statement on stage was the hard-rocking duo Black Pistol Fire, with a heavy sound and alternative rock style.

The show's star power really picked up when Doors guitarist Krieger was introduced. His too-short stay was a reminder of his winning skills as guitarist and songwriter, and guest vocalist Lauren Ruth Ward added lead vocal stylings fully in tune with the '60s psychedelic-blues-rock sound developed by the Doors. Performances of "Love Me Two Times" and a 10-minute run through "Roadhouse Blues" were terrific, the latter allowing young Los Angeles guitar player Ray Goren and Krieger to joyfully duel with their electric guitars.

Nancy Wilson delighted and surprised fans with a bluesy acoustic rock-styled take on Paul McCartney's "Let Me Roll It" (a standout cut on 1973's Band On The Run).  Nichols (who Wilson noted was a player she heard about via her 19-year-old son) then teamed up with Wilson for a ferocious take on a Robin Trower song.


Peter Frampton received a hero's welcome, and the crowd was rewarded with a couple of amazing performances. There was a mostly-instrumental arrangement of Soundgarden's "Black Hole Sun" that was one of the magic moments of the night. Frampton's extended "Do You Feel Like We Do" had the crowd on its feet, singing along and videotaping the British artist's guitar work and talk box vocal delivery.


Billy F Gibbons capped off the NAMM Jam affair with a 50-minute appearance that culminated with a full-on jam session featuring most of the night's players sharing the Grove stage.

Enroute to that freewheeling and festive close (a rousing performance of ZZ Top's 1973 classic "La Grange"), Gibbons and the house band showcased several old blues classics, as well as an artfully-reworked take on the Jimi Hendrix classic "Foxy Lady."

One thing that stood out about the night was the true sense of fun being had by all of the musicians. (I think the images captured by photographer Bob Steshetz that are featured along with this writer's review capture that!)


The audience (including yours truly) was basking in the glow while enjoying some truly great music making.