I hope to see Florence + The Machine when they come to town this fall...click here to read my review of the group's 2015 performance at The Hollywood Bowl. 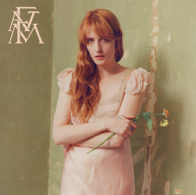