This is shaping up to be another busy year for legendary singer-songwriter-guitarist Todd Rundgren. There are several choice news items I have gathered here...Robert Kinsler


Todd Rundgren's Utopia to Return this Spring via a Highly-anticipated U.S. Tour

How sweet is this announcement? Groundbreaking artist Todd Rundgren is set to return with his mid-1970s troupe Utopia and tour the U.S. beginning April 18, 2018.

On the tour, Rundgren will be joined by bassist Kasim Sulton, drummer Willie Wilcox and keyboardist Ralph Shuckett. A complete list of the newly announced concert dates, cities and venues is posted below. Various VIP packages are available at the official Utopia site.


Although Rundgren has performed a few reunions with various members of Utopia dating back to 2011, this more high-profile affair is sure to please fans of Utopia. The band had an enduring top 40 hit titled "Set Me Free" in 1980 but broke up in 1986. 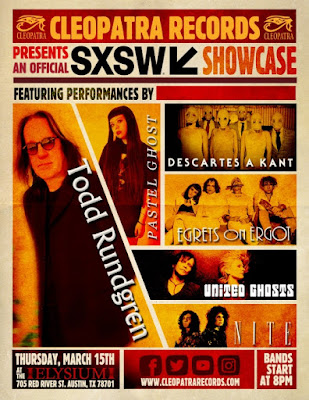 Los Angeles, CA - One of the few remaining truly independent, privately owned record labels in existence today, L.A.-based Cleopatra Records has been championing underground music and outsider artists since its inception in 1992. Now, the label has teamed up with the biggest music festival dedicated to discovering and promoting new talent, SXSW, to announce the first ever official Cleopatra Records showcase.