This year's Winter NAMM Show was held at the Anaheim Convention Center from January 25-28, 2018, with this writer also attending the NAMM Media Preview Day on Jan. 24 to get an early and in-depth look at several highly-anticipated products.

Here are some of the highlights of my four-day experience at NAMM last weekend.

Concerts and Special Appearances
A couple of decades ago, on-site performances at NAMM were not a focus of the event held every January. But once again this year performances were front-and-center throughout the show.


Those looking for more intimate concert experiences could catch established and up-and-coming artists in booths throughout the show. My favorite event may well have been the mind-blowing performance featuring 14-year-old Brandon "Taz" Niederauer and his excellent four-member band. Performing on Friday afternoon at the D'Angelico Guitars, Niederauer displayed the flashy speed of the late Ten Years After guitar great Alvin Lee with the emotional touch of modern-day bluesman Gary Clark Jr. I have seen young guitarists impress before but Niderauer's virtuoso licks, burgeoning talents as singer and songwriter as well as bona fide stage presence rival many of his considerably-older contemporaries. His wonderful songs included "I Can't Live" (a moody, textured blues rock gem) and "Tell Me Now."

I was lucky enough to catch singer-songwriter/guitar greats Shawn Jones and Stephen Inglis performing together at the Lowden Guitars booth on Saturday. Their short and fiery instrumental set ended with a freewheeling instrumental version of the Jimi Hendrix classic "Little Wing." While at the Lowden booth, I also got to check out and was truly impressed with the Northern Ireland-based company's new GL-10 Electric Guitar. Information: www.lowdenguitars.com.

Fast forward to Saturday and I caught three outstanding acts at Taylor Guitars. Country music songstress Brennley Brown, who just turned 16, and Nolan Neal (both one-time contestants on NBC-TV's "The Voice") delivered strong sets in the early afternoon, while genre-defying Japanese singer-songwriter-guitarist Miyavi wowed a packed room with his finger-slapping style of guitar and intoxicating songs, especially the driving rocker "The Others." Information: www.TaylorGuitars.com.

Yamaha TransAcoustic FG and FS Guitar Series
Yamaha introduced approximately 90 new products at Winter NAMM this year. The Buena Park, California-based company's TransAcoustic guitar series definitely offers something to get acoustic players excited. Building on the success of the company's earlier models, the new FG-TA and FS-TA puts cutting edge technology into the guitar for an affordable price (the FG-TA is priced at $599). "The guitar is able to create reverb and chorus without any external devices," explained Yamaha's Carl Tosten. "It is designed to inspire people to want to play longer."

Yamaha introduced approximately 90 new products at Winter NAMM, and the new TansAcoustic models were getting plenty of attention throughout the show. My MUSIC WORTH BUYING co-host TJR and I videotaped several segments at the Yamaha booth and will be posting those on this website soon.


Ovation Guitars / Two Glen Campbell Signature Guitar Models
While country music legend Glen Campbell passed away in August 2017, his legacy lives on in ways that stretch beyond his notable recordings. Fans of the late artist's legendary skills on the fret board got an early look at two special signature guitar models released by Ovation Guitars that made their debut at NAMM this year. Campbell's son Cal Campbell was at NAMM to share the release of the Glen Campbell 2018 American Artist Model, an acoustic guitar crafted in the Ovation Custom Shop in New Hartford, CT.

"This year marks the 50th Anniversary of the creative relationship between Ovation's founder, Bill Kaman, and my dad," said Cal Campbell in a statement released by Ovation. "Growing up, his guitars were a fixture in our lives and it has been a pleasure to work with the artisans at Ovation to ensure the look and the sound of his original gars was faithfully recreated and it's our family's hope that they will inspire future generations of artists to play, write and create for another half century and beyond."

Perhaps even more prized than Glen Campbell's acoustic instrument was the elusive "Bluebird" model. Designed and hand-crafted exclusively for Campbell in the late 1970s, the Bluebird's design was based on the Ovation Viper solid body and was produced in both 6-string and 12-string models. The Campbell family loaned Ovation Guitars Glen's original Bluebird to the guitar maker in order to create the extremely limited run of Bluebird replicas (only 10 of the 6-string models and five of the 12-string models will ever be produced!).

Fender Musical Instruments Corporation
Eric Johnson Stratocaster® Thinline
Virtuoso guitarist Eric Johnson was at NAMM on Jan. 26 to showcase the latest edition of his Eric Johnson Signature Stratocaster Thinline. At an afternoon press conference, Johnson explained he began working with Fender in 2015 to co-create a new guitar that combined the tones of his favorite semi-hollowbody guitars and his Stratocaster. "To me, my go-to instrument is a Strat. But I've always loved hollow body guitars," Johnson explained. "I used it (the new Thinline guitar) last night (at the City National Grove of Anaheim) and I used it all night." Johnson's new guitar will officially be available on Feb. 20, 2018 and will retail for approximately $1,999.99. 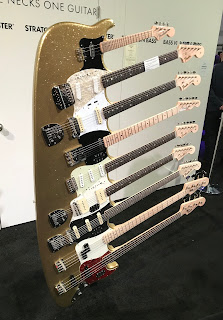 Paul Waller: Prestige 9-Neck Guitar
No overview of new guitars spotted at NAMM would be complete without a mention of Paul Waller's Prestige 9-Neck Guitar featuring nine popular pre-CBS models and scales Fender produced before 1965. Necks featured include those from a four-string mandolin, Mustang, Jaguar, Telecaster, Stratocaster, Jazzmaster, Bass VI, Jass Bass and Precision Bass. It retails for $96,000 (yikes!). See the photo I snapped on the left; in this case, seeing is believing.

INNOVATIONS
In addition to the impressive guitars I checked out at NAMM, several other products caught my attention. Stillwater, MN-based Portastand has a line of music stands that are the most impressive I've ever seen. They are not only portable and collapse into small sizes, but are durable and have the ability to serve a variety of roles on stage, in the studio or even around the office. Visit Portastand.com for more information.

Studio engineers and audiophiles should check out the Tascam DA-6400 Recorder. I met with Eric Larsen, director of marketing for Montebello, CA-based TEAC America, Inc., and I was simply blown away at the relatively small size and impressive power of the unit. It can record 64 channels of audio at 24-bit/48kHz, or 32 channels at 24-bit/96kHz! For more information visit www.teac.com or www.tascam.com.


Jim Stern, with Phoenix-based Earful Mastering, was at the Tascam booth and explained the many wonders of how the Tascam equipment enhances the dynamic range of recordings and reduces the compression that diminishes many modern-day recordings.

"I built a 1bit mastering lab (in Arizona). I can go 1bit to analog and back to 1bit," he explained. "1bit is as close to analog as we have come in digital...I'm an old audiophile and I love it. I love Tascam equipment."

The 9 string looks a little heavy.